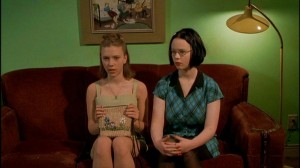 If, like me, you’ve been wondering how Terry Zwigoff, the brilliant documentary filmmaker who made Crumb, would negotiate his shift to fiction filmmaking, here’s your answer: brilliantly. Ghost World, a very personal adaptation of the Daniel Clowes comic book that Zwigoff wrote with Clowes, either captures with uncanny precision what it’s like to be a teenage girl in this country at this moment or fooled me utterly into thinking it does. Thora Birch (American Beauty) plays Enid, a comic book artist (her notebook was actually drawn by Sophie Crumb, Robert’s daughter) who plans to share an apartment with her best friend Rebecca (Scarlett Johansson). Enid befriends Seymour (Steve Buscemi), a lonely, much older collector of rare blues and jazz 78s, shortly after she almost graduates from high school. To get a diploma, she has to take an art course over the summer, and our glimpses of this add up to the funniest portrait of American “art appreciation” I’ve ever seen, with Illeana Douglas, as the teacher, rivaling Elaine May as a satirist. Never predictable, this movie is often hilarious as well as touching, subtly adapting the mise en scene of Clowes’s original without being fancy or obtrusive about it. It’s been years since I’ve seen a movie about teenagers as good as this. With Brad Renfro and Bob Balaban. 111 min. Pipers Alley. 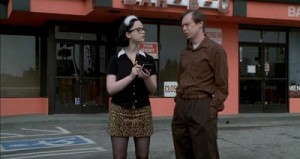