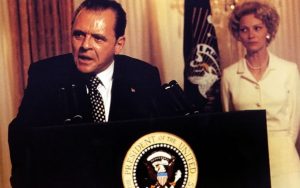 Would you buy a used car from Oliver Stone? Here’s another one (1995), guaranteed to last at least three weeks on the road, starring Anthony Hopkins as the man Stone and his fans have been calling a figure of Shakespearean proportions — which I suppose must make Stone a chip off the old bard. This runs 192 minutes and has very few jokes, but there are many references to Citizen Kane to put us in the right frame of mind. We’re asked to weep a tear or two for one of Stone’s first (as well as most recent) role models, not for any of his victims; even if he’s a flawed patriarch, he’s represented as being our very soul and tragic essence. Personally, I found even Clinton’s funeral oration more convincing. With James Woods, J.T. Walsh, Joan Allen (perhaps the only good excuse for seeing this film), Paul Sorvino, Madeleine Kahn, Bob Hoskins, E.G. Marshall, Mary Steenburgen, David Hyde Pierce, Ed Harris, and lots of kettledrums on the sound track to make us think about the destiny of nations. (JR) 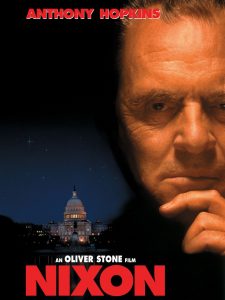