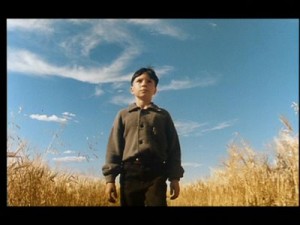 Reeking with allegory, Andrew Wyeth landscapes, undigested Flannery O’Connor, variable performances, and all kinds of ambition and pretension, this 1990 first feature by English writer-director Philip Ridley is an American gothic melodrama set in the Idaho prairies. It’s typical of the overall conception that mass murderers and child molesters figure as incidental characters and as a collective deus ex machina for a plot already so full of grotesqueries that they’re barely noticed. The plot centers on an eight-year-old boy whose playmates are abused and murdered and who thinks a neighboring English widow is a vampire; his father is a weakling with a homosexual incident in his past who commits suicide, his mother is a borderline psychotic, and the local sheriff is a veritable catalog of mutilations. The story opens with an exploding frog and also makes room for an alcoholic religious fanatic and stillborn child that the hero uncovers and thinks is one of his murdered playmates. With Viggo Mortensen, Lindsay Duncan, Jeremy Cooper, and Sheila Moore. 95 min. (JR)