It’s a fair sign of the capriciousness of the American press that it took this crass 1991 movie to get the media to discuss the assassination of John F. Kennedy; sad to say, Oliver Stone’s three hours of bombast did little to raise the level of discussion. As someone who doesn’t believe much of the Warren Report, I’m favorably disposed toward any movie that seriously questions it, but Stone’s all-purpose conspiracy theory, built like a house of cards, rivals Mississippi Burning in its sheer crudeness and contempt for the audience. Like New Orleans district attorney Jim Garrison —who investigated the assassination in the late 60s and is played as a spotless white knight by Kevin Costner — Stone and cowriter Zachary Sklar, hampered by harassment and multiple cover-ups, find themselves stuck for a suspect and focus their anger on gay businessman Clay Shaw (Tommy Lee Jones), hoping that homophobic melodrama (complete with a wholly invented male hustler played by Kevin Bacon and a dubious inflation of Shaw’s CIA connections) will paper over the gaps left in the argument. What emerges has its compelling moments, but the obfuscation needed to put it across matches the Warren Report’s desire to oversimplify. Given a mass of material that is probably even more intractable than the Dreyfus affair, it’s easy to see how Stone went off the rails, but even if one respects his desire to attack the ruling powers, more heat than light is produced in the scattershot barrage of assertions and oversentimentalized father worship. (Unfortunately, most attacks and defenses of the film in the press were equally irresponsible in their reflex gestures of self-protection, sloppy scholarship, and self-aggrandizement.) Adapted from Garrison’s On the Trail of the Assassins and Jim Marrs’s Crossfire: The Plot That Killed Kennedy; with Joe Pesci (as another gay villain), Sissy Spacek, Gary Oldman, Laurie Metcalf, Michael Rooker, Jay O. Sanders, Edward Asner, Walter Matthau, Jack Lemmon, Donald Sutherland, and a nice turn by John Candy. (JR) 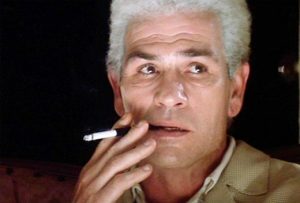