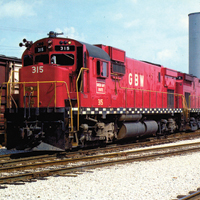 Part of what makes James Benning’s masterpiece such a satisfying culmination of his prodigious work in 16-millimeter is the way it both clarifies and intensifies the tension in his work between formal and political preoccupations, which could also be described as his love-hatred for industrial waste–a near-constant in his work.

You can find an excellent account of many of this film’s formal preoccupations from Kristin Thompson, who has just posted her comments on RR (seen at the same festival). [2020: I can’t easily provide a link anymore, but go to davidbordwell.net and search from there.] The political preoccupations of the film are partially outlined in Mark Peranson’s interview with Benning in Cinema Scope; they figure in some of the added sound materials (most obviously, Woody Guthrie’s “This Land is Our Land”), but even more crucially in the way many of the images (perhaps most notably the very last) manage to be both nostalgic and apocalyptic in the way they sum up what trains mean and have meant in relation to both American life and the American landscape. (As the interview suggests, sometimes the trains have to be understood not as parts of the landscapes but as despoilers of them.)

After one viewing, I feel I’ve barely scratched the surface of what seems somehow part of American literature–akin to the work of writers like Sandburg, Wilder, and Dos Passos as well as that of American painters and musicians. [10/4/08]