Thomas Pynchon: A Journey Into The Mind Of P. 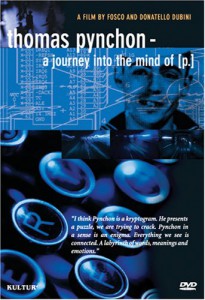 Pynchon freaks can be divided into two categories: those fascinated by his work, who respect his wish to be known through it, and those fascinated by his life, who see his writing as an illustration of his experiences. Aimed at the latter group, this 2001 Swiss documentary by Fosco and Donatello Dubini begins by enlisting a former Pynchon squeeze to show us his LA digs from the early 70s (she’s identified as Bianca from Gravity’s Rainbow, which discounts whatever art he brought to his experiences) and goes mostly downhill from there. Pynchon groupies weigh in while significant critics like Edward Mendelson are omitted, and even as gossip the movie reflects poorly on some of the author’s old friends. But the archival footage does include Lee Harvey Oswald (who may have been in Mexico City at the same time as Pynchon) and a cat freaking out on mescaline. 90 min. (JR)