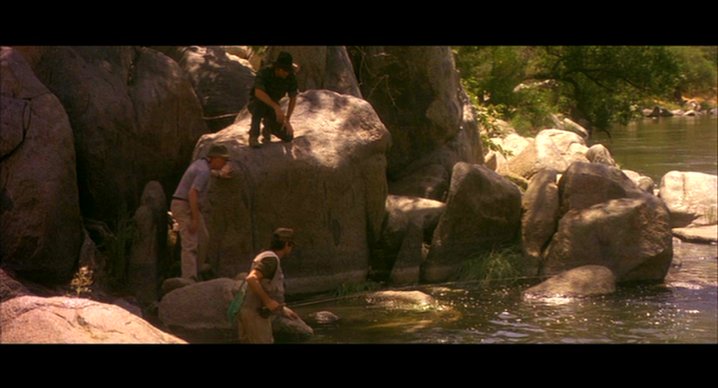 Written by Altman and Frank Barhydt 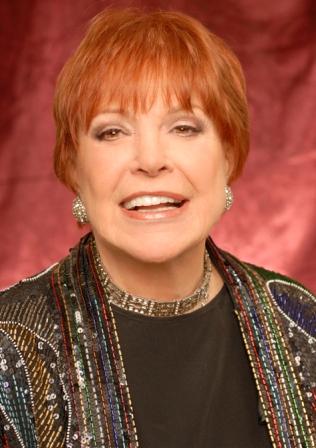 Annie Ross — the tough and resourceful British-born jazz singer Kenneth Tynan once called “a carrot-head who moves us and then brushes off our sympathy with a shrug of her lips” — projects the kind of caustic soul that seems made for a Robert Altman film. And nothing in Altman’s 189-minute Short Cuts moves me quite as much as her rendition of “I’m Gonna Go Fishin’,” sung and swung over the final credits, which roll past a set of overlapping maps of Los Angeles.

The number meshes with the movie in unexpected and mysterious ways. Its trout-fishing motif sends us back to one of the film’s key episodes and its aftermath — a trout dinner for two couples on a terrace overlooking LA that expands into an all-night party, a recapitulation of many of this movie’s other motifs and themes: Jeopardy, clown costumes, makeup, marital infidelity, partying, unemployment. Ross’s defiantly perky version of heartbreak finds apt expression in this jaunty, bruised, up-tempo waltz, written by Peggy Lee and Duke Ellington, some of whose lyrics graze other elements in the movie: “He’s a real good one for having his cake” reminds us of an undelivered birthday cake in the film’s most affecting chain of events, while the following line, “I’m gonna go fishin’ or jump in the lake,” evokes the specter of suicide. “Sweet-talkin’ liar, spin me a yarn, tell me a story big as a barn” sends us back to all the lies the two-timing characters have been telling one another over the previous three hours. Moreover, the restless, twitching lilt of the song catches perfectly the light-headedness of early morning — especially if one has stayed up all night, as many of the characters have, for happy or desperate reasons.

Ross recorded a comparable version of this song well before Altman got around to making Short Cuts, and his use of this tune as a kind of impressionistic clothesline on which to hang some of the movie’s images, feelings, and themes recalls the lovely instinctual use he made of a few Leonard Cohen songs in McCabe and Mrs. Miller 22 years ago. It’s an art of drifting, merging chance encounters between song and story, sound and image, mood and subject — Altman’s special talent at its best. Manny Farber once described director Howard Hawks as someone “whose whole movie-making system seems a secret preoccupation with linking, a connections business involving people, plots, and eight-inch hat brims.” Despite the obvious differences, Altman is clearly in the connections business himself. It’s the connections, in fact, that make some of the transitional moments of this movie as exciting as anything he’s done in years. And he seems to know that, because he calls the movie Short Cuts.

Unfortunately, no movie can be all transitions. However brilliant the shortcuts are between A and B, we still have to contend with A before and B after. Ross’s singing does serve the connections business, providing a sort of flaky, ethereal Greek chorus. But Ross also plays one of the 22 major characters — a jazz singer, as it happens, with a suicidal cellist daughter (Lori Singer) — and her character, as well as Singer’s, is both underdeveloped and overstated, at once cursory and stridently mawkish, though this seems to be the movie’s fault rather than hers. A battered nightclub veteran too busy mourning her late junkie husband to see or cope with her daughter’s nameless distress, she’s a walking illustration of Altman’s worldview; but she isn’t a real character, and Singer is even less of one. Moreover, not all of this movie’s music, alas, is provided by Ross and her jazz quintet; there’s also an insufferable new-age score by the ubiquitous Mark Isham that functions less as commentary than as leveling Muzak.

Mixing roughly ten miniplots and 22 characters, Short Cuts is Altman’s return to his ecstatic anthology mode — a kind of juggling act he practiced with two dozen characters in Nashville and twice as many in A Wedding. This time he does it all on a tightrope without a net. 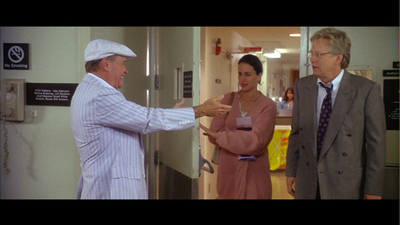 Nashville kept its 24 characters interrelated via its “exotic” (in fact, largely invented) milieu and its ersatz country-music and political motifs, while A Wedding had its central event to keep its 48 participants in line. But apart from its Los Angeles setting, Short Cuts has no obvious unifying principles, and the narrative links are more casual and incidental, which makes the implications of Altman’s method much more radical — a refreshing if somewhat dizzying alternative to the standard simplicities of Hollywood moviemaking. 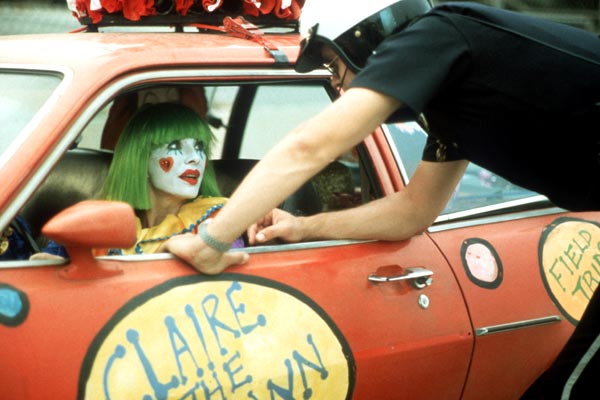 A pilot (Peter Gallagher) tries to win back his ex-wife (Frances McDormand), who’s having an affair with a cop (Tim Robbins). The cop is married to a painter’s model (Madeleine Stowe), the sister of the wife (Julianne Moore) of a doctor (Matthew Modine). The doctor is taking care of the little boy of a TV commentator (Bruce Davison) and his wife (Andie MacDowell) who’s been hit by the car of a waitress (Lily Tomlin) on her way home from work. 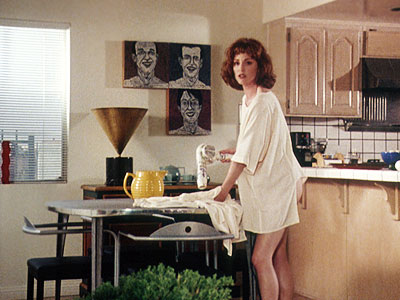 The waitress is married to an alcoholic chauffeur (Tom Waits) who hangs out at a nightclub where Annie Ross sings, and her daughter (Lili Taylor), who lives with a Hollywood makeup artist (Robert Downey Jr.), happens to be friends with a young mother (Jennifer Jason Leigh) who does phone sex for a living. The young mother is married to a man (Chris Penn) who cleans swimming pools, including those of the injured boy’s parents and Ross, who live next door to one another. The trout dinner, planned at a classical concert where Ross’s cellist daughter is to perform, is hosted by the doctor and his painter wife; the guests are an out-of-work salesman (Fred Ward), who stopped off at the greasy spoon where the waitress works before going fishing, and his wife (Anne Archer), who dresses as a clown for children’s parties and previously turned up at the hospital where the doctor works, after being stopped and sexually harassed by the cop.

This is far from an exhaustive list, of either the characters or their interconnections. In terms of organization, the movie’s assurance and relative simplicity in spelling all this out are breathtaking, and the various ways Altman finds of pivoting between one set of characters and another are often ingenious. (As critic David Ehrenstein pointed out to me, they recall the editing strategies of Fritz Lang; in this respect they have much more in common with the procedures of Jacques Rivette in Out 1 than with the free-form actorly interactions of either Howard Hawks or Jean Renoir.) When MacDowell calls Davison at his TV studio to tell him about their son’s accident, and he says he’ll call the hospital, an ambulance coincidentally appears on a nearby TV monitor; the sound of this siren carries over to a shot of MacDowell with her son waiting for an ambulance to arrive, then carries over to Waits in a trailer watching the TV ambulance and hearing a TV voice-over say, “Accidents happen every day.”

Contrived accidents are basic to the movie’s game plan. One reality is made to spill into another, and some of the loveliest developments — the humanizing of a disgruntled baker (Lyle Lovett) who we’ve encountered mainly as the disembodied telephone voice of a crank caller, and a mix-up of snapshots between two clusters of characters at a Fotomat — can be described as exercises in dialectical relativity that come about when separate fictional worlds in the movie are briefly made to converge.

Given Altman’s long apprenticeship as a TV director (1953-1966), it’s easy to see where his organizational strategies come from: having to arrive at a cliff-hanger, epiphany, or pirouette every ten minutes or so, before commercial breaks. So it’s not surprising that TV itself often functions as a link between various sets of characters, along with a medfly crisis at the beginning of the picture and an earthquake toward the end. (Properly speaking, TV and ecological crises are all the 22 characters have in common, though there are many references early on to doors being left open — a glancing reference to the more figurative portals that make the interactions between the various plots possible.) Yet for all the admirable narrative economy this engenders, Altman’s TV background also produces occasional, lamentable blackout gags that violate the plausibility of the characters or their situations for the sake of easy sitcom sign-offs; it also allows for facile conceits. A little boy returns with his mother from a weekend trip to find their home in ruins and, with nothing more than a cursory glance at the wreckage, starts watching TV. A young mother does phone sex while changing her baby’s diapers — a profound commentary on our times, perhaps, but only if both her offscreen customer and the movie’s spectators can ignore the baby’s wails. 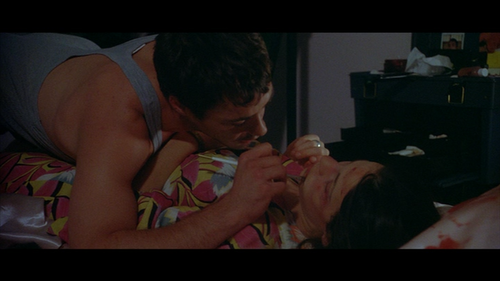 In short, this ambitious movie gets into trouble mainly between the transitions, particularly during those moments when Altman forsakes local connections and goes rummaging after universal principles. Generally these principles relate to chance encounters and mysterious connections — most often missed connections, as in the relationship between Ross and Singer — coupled with the conviction that life is grossly unfair and dishes out brutal ironies at regular intervals. But formally experiencing these encounters and connections is one thing, and being browbeaten with the message that they’re what life is about is another. Certain related principles emerge from this picture’s preoccupation with mechanically piling up corpses — four by my count, three of them nubile females, and two more if one includes Ross’s late husband and Downey’s applying makeup to Taylor to simulate a corpse. One of these corpses, a raped young woman discovered in a stream by Ward and his fishing buddies, is implausibly made up to resemble a Playboy centerfold for the sake of some dubious “poetic” inflections. Another young woman is produced simply to provide the swimming-pool cleaner’s sexual frustration an unexpected murderous outlet — another Profound Commentary on Our Times. 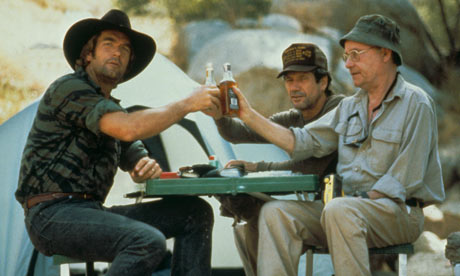 On reflection, it seems that the more characters Altman mixes into his stew, the thinner its overall texture becomes, which is one reason Nashville is stronger than A Wedding and Short Cuts is occasionally tangier than either. (The Player, in which every actor and celebrity cameo winds up hawking the same infotainment merchandise, is the thinnest of the lot.) The curse and blessing of this overload is that it excites only as long as it remains “work in progress,” in a state of perpetual becoming with no end point in sight. Give it all closure and some kind of overarching “meaning” — the American flag in Nashville, the brassy fanfares in A Wedding, the glib ideas about Hollywood creativity in The Player, and most of the corpses in Short Cuts — and it freezes into stale editorials.

Instinctual rather than intellectual, Altman usually goes to pieces when he tries to justify what he’s doing, either in interviews or on the screen. Every time you turn on the TV or open a film magazine he’s asserting that this movie is “Raymond Carver soup”; worse still, in the pages of the New York Times Book Review last month, he actually remarked, in an attempt at self-disparagement, “I agree that real art is without irony,” one of the dumbest statements a director of his distinction has ever uttered.

The good news about Short Cuts is that it’s Altman soup — with a few characters and situations from Carver stories tossed in for flavor — and for all its flaws it’s real art, packed with irony. The bad news is that Altman’s conception of art won’t rest with the intricate processes he sets in motion, but has to incorporate high-flown generalizations about them to give his audience a sense of superiority. If only the siren call of the marketplace didn’t force him to give the whole farrago some artificial sense of closure.