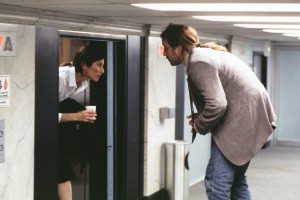 This outrageous comic fantasy may not sustain its brilliance throughout its 112 minutes, but it keeps cooking for so much of that time that I don’t have many complaints. The first feature of both screenwriter/executive producer Charlie Kaufman (who’s written for several TV series) and director Spike Jonze (who’s directed commercials, music videos, and short films), it charts the complications that ensue when an out-of-work puppeteer (John Cusack) gets a filing job on the surrealistically cramped seventh and a half floor of an office building, where he discovers a hidden tunnel that allows its occupant to become actor John Malkovich (playing himself, natch) for 15 minutes before being ejected onto the New Jersey Turnpike. Things get even wilder when the filing clerk and his wife (Cameron Diaz as a pet-store employee) both get the hots for the same woman (Catherine Keener), who has comparable lust for the wife as long as she’s inside Malkovich. What’s great about this lunatic farce isn’t only its premises about sexual and professional identity but also the spirited way the actors and filmmakers flesh them out. With Orson Bean and Mary Kay Place. (JR) 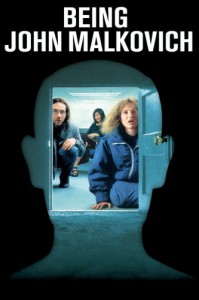