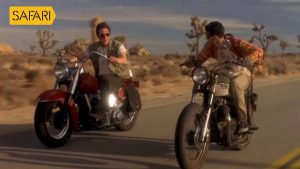 The acting is raw and unglued, the guest-star appearances of aging 60s icons (Arlo Guthrie, Timothy Leary, David Carradine) are self-conscious and arch, and the sprawling episodic construction is underlined by conceptions that are sentimental to a fault. But this odd little road movie — a first feature written and directed by Abbe Wool, who cowrote Sid & Nancy — still got to me, mainly because of its sincerity and its relative novelty in trying to locate the dregs of American counterculture in various portentous and philosophical roadside encounters. The semifantastical plot concerns the absurdist journey of two bikers (John Doe and Adam Horovitz, members respectively of the bands X and the Beastie Boys) from southern California through parts of Nevada. Doe, the older biker, is a grizzled factory worker literally searching for a place called El Dorado, where he wants to scatter the ashes of an acquaintance (David Anthony Marshall) who died in a freak accident; Horovitz is a younger biker with a Motel 9 fixation who insists on tagging along. At its worst, this registers like an unconscious parody of Easy Rider; at its best, it suggests a flea-bitten yahoo version of Pier Paolo Pasolini’s Hawks and Sparrows. It clearly isn’t for everybody, but if you like it at all you’ll probably wind up moved as well as charmed by its ambitions and conceits. With Jennifer Balgobin (the love interest, a philosophical stripper en route to the Yukon), Bill Cobbs, and Stephen Tobolowsky, and a couple of brief appearances by John Cusack as an anarchist outlaw. (Pipers Alley)