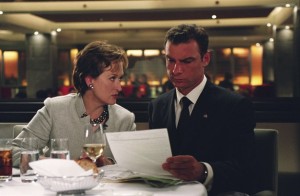 I don’t get it. As Dave Kehr has noted, the 1962 original was an audacious mix of cold war paranoia and twisted cabaret humor. Any remake that scuttles both had better have something good to replace them with; this offers only a vague retread of anticorporate thrillers from the 70s. The story’s been updated to the first gulf war (Manchurian is now just the name of an evil conglomerate) and deprived of its major shocks (involving formal inventiveness, over-the-top dialogue, and the way the incest is presented). Oddly, it does retain some of the original’s political murkiness — the right-wing villainess (Meryl Streep) resembles Hillary Clinton — but there’s no mythic or comic payoff. If you don’t care much about the first version, or what director Jonathan Demme’s name once meant, the cast does an OK job with Daniel Pyne and Dean Georgaris’s routine thriller script. But the bite found in the best recent political documentaries is missing. With Denzel Washington, Liev Schreiber, Jon Voight, and Jeffrey Wright. R, 135 min. (JR)