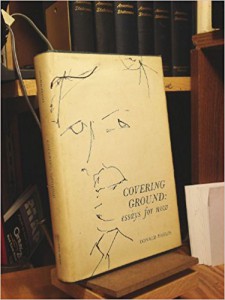 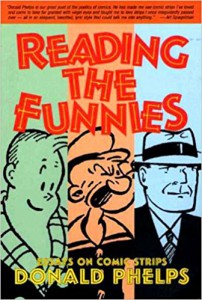 In some ways, the saddest deaths are those we only hear about accidentally. For me, Donald Phelps was one of the very greatest of American critics — not just literary critic and film critic, but comics critic as well — even though only two collections devoted solely to his written work exist (see above). I would love to imagine that many more will follow, because it’s clear that anyone who tracks down obscure journals, including his own (For Now), looking for Phelps’ insightful and highly original prose, will discover an unending bounty. But it seems like he never had much money, and even before the advent of Trump, Phelps appears to have lived his entire life in the shadows.

I learned of his death by ordering another collection — Sparring with Gil Kane: Debating the History and Aesthetics of Comics — from Fantagraphics Books, chiefly because it boasted having a dialogue with Phelps, and it was only upon reading editor Gary Groth’s introduction that the demise I’d already suspected was confirmed. But at least Donald survived until his mid-80s. Several years earlier, after the stupidity and intolerance of a new Film Comment editor had summarily turned him from an invaluable regular contributor into a non-contributor, I had started to communicate with Donald by letters and by phone as a way of funneling his genius into the precincts of an Australian online film journal named Rouge that managed to publish half a dozen texts of his over its 13 precious issues. Then, some time afterwards, one of Rouge‘s editors, Adrian Martin, joined me, while we were both attending a conference at New York University, on a trek to the Lower East Side to a living-assisted establishment where we could meet cheerful Donald himself, in a wheelchair, for about an hour.

If memory serves, Donald even managed to hand over an additional typewritten text or two to me during our chat, but as far as I know, these never saw print — although Gary Groth did generously publish some subsequent Phelps texts on his Fantagraphics/Comics Journal web site. For the rest — and I have no doubts that multiple treasures now remain virtually out of reach — we’ll have to wait for some more enlightened era to give Phelps’ critical writing the full airing it deserves. (P.S.: If any other online Phelps texts exist, awaiting our discovery, please email me the links at [email protected], and I’ll post them.) [2/8/2018]

Here are two, from Scott Moore: