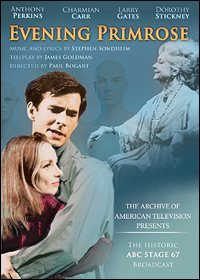 An extremely odd 1966 Steven Sondheim TV musical (1966) — 52 minutes, in black and white — adapted by James Goldman from an equally odd john Collier story of the same title about a poet (Anthony Perkins) who decides to live in a Manhattan department store and discovers an entire community of after-hours eccentrics already camped out there, including a wispy maiden (Charmian Carr) who’s spent most of her life there, whom he falls in love with and teaches how to read. Perkins, by the way, is a pretty delightful singer. The fact that part of this show was actually shot on location in and around a 42nd Street emporium is only part of what’s so strange about it. But I find it impossible to guess how peculiar it might have looked 44 years ago, because I’ve just seen it for the first time.

A good-quality, newly discovered kinoscope print of this ABC Stage 67 broadcast is what led to this recent DVD release.  Among the useful and thoughtful extras is an extended interview with the now-retired director, Paul Bogart — a TV veteran who also directed Torch Song Trilogy back in 1988, and who offers a thoughtful autocritique, at once modest and apt, of his own contributions. [12/11/10] 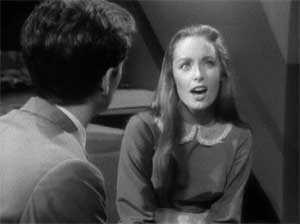