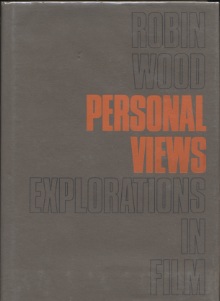 It’s a pity that Robin Wood’s first collection of essays, published in England four years ago, has had to wait this long to find a US distributor (ISBS, Inc., PO Box 55, Forest Grove, OR 97116). Very much of a transitional work between Wood’s justly celebrated auteurist monographs (on Hitchcock, Hawks, Bergman, Penn and Satyajit Ray) and his recent, more ideologically based film studies. Personal Views: Explorations in Film inevitably loses some of its intended impact by arriving here out of sequence. And for those like myself who feel that the essays in this volume do not represent Wood’s work at its strongest — weighted, as many of them are, more toward the adoption of certain positions than toward their subsequent implementations (and other consequences) — they are more often useful as “stepping stones,” in establishing the backgrounds of some of Wood’s current arguments, than they are as independent studies in their own right.

In broad terms. what this book chronicles in some detail is Wood’s discovery of –and engagement with – some of the theoretical issues in film theory that were being broached in Screen in the early seventies, including those which directly challenged many of the pre-suppositions of his own earlier work. While the seriousness and earnestness of Wood’s grappling with these issues are never in question, it does seem unfortunate that for many of the readers of Film Comment –-where several portions of this book first appeared — Wood’s paraphrases of certain arguments in Screen were taken to represent that magazine’s overall thrust rather than a few isolated issues within a much broader context (which included semiology, Russian formalism, psychoanalysis, and the avant-garde — none of which commands much of Wood’s attention or interest here).

While Personal Views predates Wood’s “Responsibilities of a Gay Film Critic” (a central position paper, in the January-February 1978 Film Comment) and most of his work on the horror film (see The American Nightmare, published by the Canadian Film Institute, and “Neglected Nightmares,” in the March-April 1980 Film Comment), the seeds of these concerns are nonetheless evident here. However transitional many of these earlier pieces may be — split fairly evenly between separate studies (of The Scarlet Empress, Letter from an Unknown Woman, Touch of Evil, and films by Mizoguchi and Jacques Tourneur) and polemical forays — they benefit from a salutary honesty and directness that is at opposite poles from that expedient careerism that undermines so many academic debates. Unlike, say, a Peter Wollen who will cleverly refuse to respond to any serious challenges to his arguments (such as Wood’s “Hawks De-Wollenized,” in Personal Views), under the apparent assumption that it’s a mistake to confront one’s own errors in public, Wood seems unafraid about embarrassing either himself or his reading public. Even when he’s at his worst,   coming across like a humorless square (“films like Death Takes a Holiday and Lady in the Dark are, in  their foolishness and vulgarity, beneath serious consideration as works of art”), Wood has an authenticity that few living film critics can match. And Personal Views, whatever its limitations, is a testimony to untidy honesty. — JONATHAN ROSENBAUM 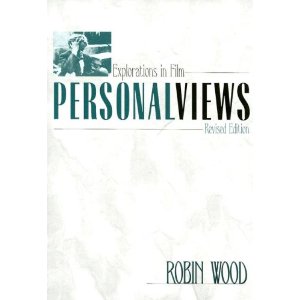