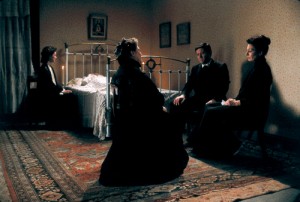 John Huston devoted the better part of his career to a sort of intelligent second-degree cinema predicated on the adaptation of literary worksa practice informed by crafty casting and fluid storytelling, but often limited by the fact that his attraction to heavyweights (The Maltese Falcon, The Red Badge of Courage, Moby-Dick, The Man Who Would Be King, Wise Blood, and Under the Volcano, among others) guaranteed faithful reductions at best. His last film (1987), which adapts the final story in James Joyce’s Dubliners, represents the apotheosis of this position — isolating the story from the rest of Dubliners (which gives it much of its resonance) and most of its perfectly composed language, and then doing his best with what remains. Scripted by his son Tony and starring his daughter Anjelica, the film hews to the original plot and much of the dialogue. The results are leagues ahead of Joseph Strick’s unfortunate Joyce adaptations, but inevitably leagues behind the original story. That said, the film’s concentrated simplicity and purity achieve a kind of perfection. The uniformly superb cast includes Donal Donnelly, Cathleen Delany, Helena Carroll, Ingrid Craigie, Frank Patterson, Dan O’Herlihy, and Donal McCann as Gabriel Conroy; the lilting Irish flavor is virtually decanted, and Fred Murphy’s gliding camera movements are delicately executed. There’s also a rather awesome and unpretentious directness as well as calmness about the way that Huston contemplates his own rapidly approaching death. 83 min. (JR) 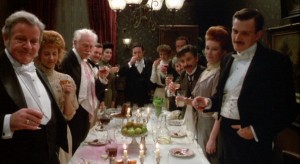 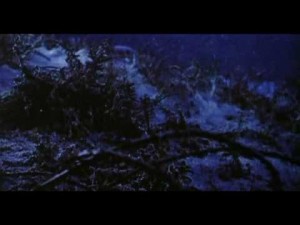