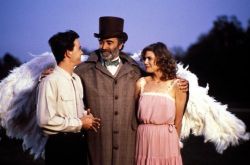 Alan Rudolph’s movie begins promisingly: Mike (Tim Hutton), out of work in the mid-40s (in black and white), dies in an accident and finds himself in heaven (in color), where he’s greeted by his amiable Aunt Lisa (Maureen Stapleton), and shortly falls in love with Annie (Kelly McGillis), an unborn soul. Heaven here is rather like Ray Bradbury’s Mars, a site of nostalgic wish fulfillments, and if Rudolph and screenwriters Bruce A. Evans and Raymond Gideon had only remained there, the movie might have somehow sustained its fragile, otherworldly charm. But Annie leaves to be born on earth, and Mike, who’s allowed to be reborn, is given 30 years to find her again. Inexplicably, the film remains in color as it returns to earth; the new selves of Annie and Mike still look the same, but how they’re supposed to find one another with fresh identities and nearly blank memories is not made clear, and vagueness gradually gives way to muddleheadedness. Although a string of cameos by nonactors (including novelist Tom Robbins and various rock singers) leads to some awkward moments, Rudolph still shows some talent in handling professionals (such as Ann Wedgeworth and Don Murray, as well as the leads), though he’s invariably better off when directing his own scripts (e.g., Remember My Name, Choose Me). But Ellen Barkin and Debra Winger — both uncredited, the latter in drag as Emmett, the heavenly emissary — do manage to juice things up a little. (JR) 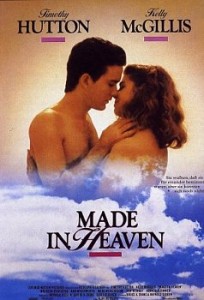