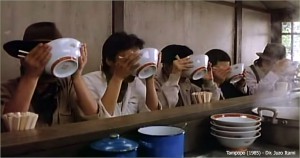 Juzo Itami’s second comedy (1987) represents a quantum leap beyond his first (The Funeral): without abandoning his flair for social satire, he expands his scope to encompass the kind of narrative free play we associate with late Buñuel. His subjects are food, sex, and death, roughly in that order, his ostensible focal point the opening of a noodle restaurant. Working with a venerable cast that includes veterans of Kurosawa, Ozu, Shinoda, and Terayama, he takes us on a wild spree through an obsession, winding his way through various digressions with a dark, philosophical wit that is both hilarious and disturbing. Not to be missed. In Japanese with subtitles.