Victor Erice’s second feature (1983), based on a story by Adelaida Garcia Morales, seems to bring back some of the haunting obsessions of his first, the wonderful The Spirit of the Beehive (1973): the aftermath of the Spanish civil war, the magical spell movies exert over childhood, and a little girl’s preoccupation with her father and the past. This subtle spellbinder ends somewhat abruptly, reportedly because the film’s budget ran out, but it seems to form a nearly perfect whole as it is: a brooding tale with the poetic ambience of a Faulkner story about an intense father-daughter relationship and a mysterious and resonant past. English critic Tim Pulleine has observed that a reference to Hitchcock’s Shadow of a Doubt points to an elaborate system of duplication underlying the film’s structure, seen in shots and sequences as well as themes (north and south, father and daughter, real and imaginary). Omero Antonutti (Padre padrone) plays the father, Sonsoles Aranguren the daughter. (JR)… Read more »

The Stars Are Singing

Anna Maria Alberghetti plays a Polish refugee who illegally enters the U.S. and becomes an operatic recording star in this 1952 musical, which also features Rosemary Clooney singing her hit Come on-a My House and the ever-reliable Fred Clark. Reportedly the first film ever released in VistaVision; directed by Norman Taurog.… Read more »

An unexpected triumph. Writer-director Ramon Menendez’s 1988 account (based on a true story) of how a math teacher at the mainly Hispanic Garfield High School in East LA (Edward James Olmos) turns a group of students into whizzes at calculus makes for a lively and rousing show. Working with a talented cast (including Lou Diamond Phillips, Rosana DeSoto, and Andy Garcia) and cowriter Tom Musca, Menendez reworks the theme of Blackboard Jungle without the sensationalism or the sexism, and proves that they aren’t needed to give his material a jolt. It’s virtually impossible to dramatize the actual teaching of mathRichard Brooks had even less success in showing the work of an English teacher in Blackboard Junglebut Menendez tells the rest of the story with verve and apparent authenticity, and Olmos is especially effective in focusing the story with a minimum of liberal homilies and a great deal of unglamorous charisma. 105 min. (JR)… Read more »

Made the year after Bertolucci’s Before the Revolution (1965), Basilio Martin Patino’s touching first feature, set mainly in the university town of Salamanca, Spain, echoes and parallels that film in many respects, although here the loss of religious faith plays the role of a betrayed Marxism. Cast in the form of nine letters written to a young woman met by the hero (Emilio Gutierrez Caba) during his only trip abroad, the film has a loose, episodic structure built around various chapter headings (The Family Rosary, One Sunday Afternoon, A World of Happiness, etc.), and like many of the other youthful and sensitive European movies of this period, the impact of the French New Wave is salutary in the fresh use of film language: fast editing, slurred motion, and a freezing and unfreezing of certain images that makes them reverberate like pictures pasted into a scrapbook. Delicately acted and directed with a keen affection for the characters, this is surely one of the best Spanish films of the Franco period. (JR)… Read more »

Filmmak-er Michael Maziere of the London Filmmakers Co-op will introduce his own selection of recent British experimental work. The concerns of these filmsby John Smith, Pier Wilkie, Sandra Lahire, Anna Thew, Jean Mathee, Moira Sweeney, Nik Gordon-Smith, and Maziere himselfrange from sexuality, cultural identity, history and subjectivity to more psychological concerns about humor, madness and death. It’s not often that work of this kind crosses the Atlantic; if earlier programs from the co-op that I’ve seen are anything to go by, these filmmakers are involved more rigorously and consciously in film materiality and ideology than most of their American counterparts.… Read more »

The Houses Are Full Of Smoke

Allan Francovich’s new documentary feature about the history of U.S. involvement in Guatemala, El Salvador, and Nicaragua, recently served as an important reference point in the U.S. congressional hearings on contra aid. Running about three hours, the film contains interviews with people of every political persuasion about Central America, and, according to Francovich, tells the story behind what Oliver North was really up to.… Read more »

Carlos Saura’s first feature, Los golfos (1959), follows a teenage gang that plans to burglarize a large factory in order to finance a friend’s bullfighting career. A key early work in the new Spanish cinema whose impact was partially blunted by the government censors, who eliminated about ten minutes; with Manuel Zarzo and Luis Marin.… Read more »

An Australian soap opera reuniting the director (Gillian Armstrong) and lead actress (Judy Davis) of My Brilliant Career eight years later. This time they’re teamed in a somewhat protracted tale of a backup singer (Davis), temporarily stranded in a trailer park in a coastal fishing town, who accidentally encounters the daughter she abandoned many years ago (Claudia Karvan), now living with her grandmother (Jan Adele). While the acting is uniformly competent and Davis is especially good, Laura Jones’s screenplay never gets beyond the obvious and familiar. (Davis’s part was originally written for a man, and while Davis makes the character suggestively travel scarred, she can’t really transcend a part that seems somewhat hackneyed for either sex.) The results are watchable enough, though not nearly as good as Housekeeping (1988). (JR)… Read more » 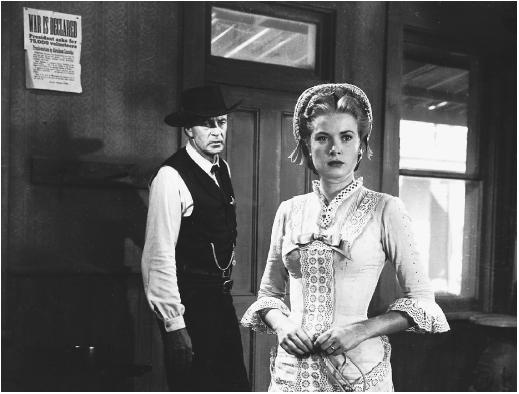 After many years of being vastly overrated, this liberal adult western of 1952 may be underrated in some quarters today. While the film angered Howard Hawks into making one of his masterpieces (Rio Bravo) as a kind of rebuttal, it got smothered in Oscars; still, it’s not entirely devoid of virtues. Gary Cooper is a sheriff who’s about to retire (so he can marry Grace Kelly) but has to face a final gunfight alone when all of the townspeople refuse to help him. Carl Foreman wrote the script and planned to direct until the Hollywood blacklist made this impossible; Fred Zinnemann took over and did a fairly good job of milking suspense out of the situation — the film’s 84 minutes are meant to correspond to the actual time in which the plot unfoldswith his usual somewhat mechanical polish. Some of the results ring false, but the memorable theme song and some equally memorable character acting (by Thomas Mitchell and Lon Chaney Jr. more than Lloyd Bridges and Katy Jurado) help things along. (JR)… Read more »

The Beatles’ second feature with director Richard Lester gallivants all over the place, with a plethora of inventive sight gags and songs. The plot resembles a 60s anticipation of the Indiana Jones epics, with a religious sect attempting to recover a sacred ring from Ringo. Most critics called this a comedown from A Hard Day’s Night when it first came out (1965), but in some ways it’s even more exhilarating. (JR)… Read more »

American hippies (including Danny Stone) on the isle of Ibiza learn about LSD from George Montgomery, leading to a crime spree that ends in murder. The main gimmick of this 1966 exploitation item written and directed by one Edward Mann (actually Santos Alcocer) is that the main action is in black and white, the trip sequences in color. A presentation of the Psychotronic Film Society.… Read more »

Women Of The Avant-garde

A rather loose grouping of four experimental works by women; Leslie Thornton’s extraordinary Adynata (1983)a nonnarrative meditation on the East as viewed and imagined by the Westis alone worth the price of admission. Also included are Shirley Clarke’s Bridges Go Round (1958), Carolee Schneemann’s Fuses (1967), and Sharon Couzin’s Deutschland Spiegel (1980).… Read more »

Woman’s Image In The Movies

Paul Newman stars in this 1982 courtroom drama, playing an alcoholic Boston lawyer who manages to clean up his act enough to represent the victims in a malpractice suit against a Catholic hospital. Sidney Lumet’s direction, like David Mamet’s patchy script (which adapts a Barry Reed novel), may not be quite good enough to justify the Rembrandt-like cinematography of Edward Pisoni and the brooding mood of self-importance, but it’s good direction nonetheless; and there are plenty of supporting performancesby James Mason, Jack Warden, Milo O’Shea, Charlotte Rampling, and Lindsay Crouse, among othersto keep one distracted from Newman’s dogged Oscar-pandering. R, 129 min. (JR)… Read more »

Roberto Rossellini’s 1961 historical romance. By all reports, it’s a key film in Rossellini’s career, marking the turning point between his early neorealist style and the austere historical studies of the late period.… Read more »