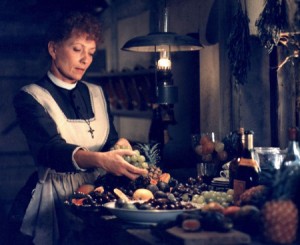 Gabriel Axel’s Danish feature, the 1987 Oscar winner for best foreign film, is based on an Isak Dinesen tale. On the whole, the adaptation is faithful but some of the qualities of Dinesen’s language are lost in translation or through abridgment, and the politics have been needlessly simplified. The plot concerns a French servant in a strict Lutheran household in Denmark — Norway in the original — whose family has perished in the French Commune uprising. The acting is impeccable and the ambience suffused with delicate charm, but overall this doesn’t aim at anything higher than Masterpiece Theatre or a Merchant-Ivory film. Aside from the elaborate serving of the eponymous meal, which expands greatly on the original, few of the additions constitute improvements. With Stephane Audran, Jean-Philippe Lafont, Jarl Kulle, Bodil Kjer, and Birgitte Federspiel (Ordet). In Danish with subtitles. 102 min. (JR) 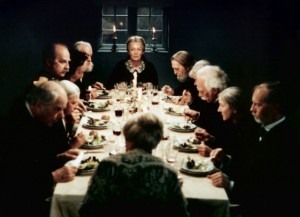