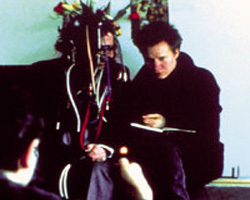 Jean-Luc Godard’s zany, English-speaking quasi adaptation of the Shakespeare play has the most complex and densely layered use of Dolby sound in movies, and this screening offers one the first chance in Chicago to hear it properly. The “itinerary” of the film–one can’t quite consider it a plot — involves a post-Chernobyl view of culture in general and Shakespeare’s play in particular. Among the performers, mainly used by Godard as a painter might use colors, are stage director Peter Sellars, Molly Ringwald (as Cordelia), Burgess Meredith (as Lear), a semiincoherent Godard (as someone called Professor Pluggy), and, in smaller parts, Norman Mailer, his daughter Kate Miller, film director Leos Carax, and Woody Allen. The film certainly qualifies as a perverse provocation on more levels than one, but one of these levels — believe it or not — is Shakespeare. It may drive you nuts, but it is probably the most inventive and original Godard film since Passion. (Film Center, Art Institute, Columbus Drive at Jackson, Friday, March 31, 6:00 and 7:45, 443-3737)