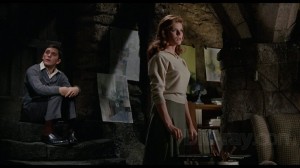 Perhaps the most interesting element of John Fowles’s novel is its alternation between two narrators — the shy and eccentric butterfly collector who kidnaps a young woman to add to his collection, and the woman herself. By jettisoning this structure, this 1965 film has precious little to hold one’s interest, apart from Terence Stamp and Samantha Eggar as the leads; Stanley Mann and John Kohn’s script adaptation is relatively flat-footed, and William Wyler’s direction is as academic as ever. 119 min. (JR)