From the Chicago Reader (October 1, 1989). This lovely and sexy film is coming out on Blue-Ray from Twilight Time, with lots of extras (including deleted scenes and two separate audio commentaries). — J.R.

Real-life brothers Jeff and Beau Bridges play Jack and Frank Baker, a second-rate cocktail-lounge piano duo with staying power who hire sexy vocalist Susie Diamond (Michelle Pfeiffer) to strengthen their act, in the impressive 1989 directorial debut of screenwriter Steve Kloves (Racing With the Moon), who also wrote the script. Frank is the square brother who handles the business; he’s married, with kids, and not very musically inspired. Jack is remote, relatively irresponsible, and gifted; he plays jazz in his spare time and sounds like a leaner version of Bill Evans (his piano solos are dubbed, for the most part expertly, by Dave Grusin, the film’s music director). Susie is a former call girl who brings some soul to the group, as well as some problems when she and Jack develop a mutual attraction. This pared-away comedy-drama, which concentrates exclusively on the three characters, has plenty of old-fashioned virtues: deft acting, a nice sense of scale that makes the drama agreeably life-size, a good use of Seattle locations, fluid camera work (by Michael Ballhaus), a kind of burnished romanticism about the music, and a genuine feeling for the characters and their various means of coping. And Pfeiffer turns out to be a terrific singer. (JR) 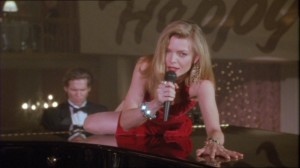