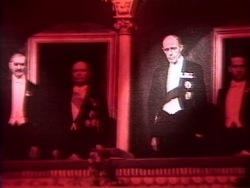 American TV watchers, eat your hearts out! These four selections from “Ten to Eleven” — a series of short, experimental “essay” films made for German television by the remarkable German filmmaker Alexander Kluge, to be shown here on video — are not always easy to follow in terms of tracing all their connections, but they’re the liveliest and most imaginative European TV shows I’ve seen since those of Ruiz and Godard. Densely constructed out of a very diverse selection of archival materials, which are manipulated (electronically and otherwise) in a number of unexpected ways, these historical meditations often suggest Max Ernst collages using the cultural flotsam of the last 100 years. Why Are You Crying, Antonio? relates fascism, opera, and domesticity; Articles of Advertising historicizes ads in a number of novel ways; Madame Butterfly Waits offers a compressed history of opera and its kitschy successors in pop culture; and the self-explanatory The Eiffel Tower, King Kong, and the White Woman makes use of comics, movies in the 1890s, a quote from Heidegger, and multiple images of the famous ape and tower. These are apparently fairly recent works. A Chicago premiere. (Randolph St.… Read more »

This early experimental feature, slightly longer than an hour, by Chantal Akerman (1972), shot silently and brilliantly by Babette Mangolte, explores the corridors, lobby, elevators, and rooms of a cheap New York hotel. Occasionally the rooms’ solitary occupants are glimpsed, but this only increases the overall atmosphere of eerie isolation and quiet, and reveals perhaps more than any other Akerman film how central an influence Edward Hopper has had on her work. On the same program, two very early Akerman shorts: Saute ma ville! (1968) and Lachambre (1972). Saute ma ville!–Akerman’s first film, made when she was still a teenager–is a hilarious and appropriately claustrophobic forerunner of Jeanne Dielman, starring Akerman herself as a neurotic individual who creates apocalyptic havoc in her own kitchen. An illuminating and luminous program, not to be missed. (Facets Multimedia Center, 1517 W. Fullerton, Monday through Thursday, January 15 through 18, 7:00, 281-4114)… Read more »

A historically fascinating picture about the Civil War’s 54th Regiment of Massachusetts Volunteer Infantry, made up of black enlisted men and headed by a white colonel named Robert Gould Shaw (Matthew Broderick). Directed by TV award winner Edward Zwick (thirtysomething, Special Bulletin) from a script by Kevin Jarre (Rambo: First Blood Part II), the film suffers from some of the war-movie and liberal-movie cliches that one might expect from filmmakers with these credits, but the cast–which also includes Denzel Washington, Morgan Freeman, and Cary Elwes–is strong, and the training and battle scenes seem carefully researched. Lurking somewhere in the background of this true-life tale, derived from two books (Lincoln Kirstein’s Lay This Laurel and Peter Burchard’s One Gallant Rush) and the letters of Robert Gould Shaw, is some caustic irony about the outcome of the black soldiers’ desire to fight that the movie never confronts directly enough. But this is still a pretty watchable and always interesting period film, well photographed by English cinematographer Freddie Francis. (Webster Place, Evanston, Evergreen, Hyde Park, Hillside Square, Norridge, Yorktown, Water Tower, Lincoln Village)… Read more »