The onetime Chicago-based filmmaker will be here for a screening of seven of her films made during the 80s, presented in conjunction with Women in the Director’s Chair. Some of the half dozen of these films that I’ve seen are lyrical studies in motion whose subjects are usually either tourist attractions or tourists: Pools, Pond and Waterfall, Tourist, and Parisian Blinds–all made between 1980 and 1983. Others are more complex meditations: Optic Nerve (1985), on how and what Hammer’s grandmother, who’s in a nursing home, sees; and Endangered (1988), on the precarious situation of the independent, artisanal filmmaker. The most recent film to be shown, which I haven’t seen, is Still Point, completed last year, which will be receiving its Chicago premiere. Optic Nerve and Endangered, the most interesting of the films I saw, concentrate on the processes of seeing and abound in striking, strobelike effects, superimpositions, and diverse split-screen and jigsaw-puzzle like compositions. Endangered also features glimpses of endangered species from the bird and animal kingdoms. Both films have eloquently spare sound tracks composed by Helen Thorington. (Chicago Filmmakers, 1229 W. Belmont, Wednesday, February 28, 7:00, 281-8788)… Read more »

The Plot Against Harry

Shot in black and white in 1969, but neither completed nor shown until 1989, this delightful, offbeat comedy about a sad-eyed, small-time New York numbers racketeer named Harry Plotnick (Martin Priest) who has just emerged from prison after many years, was written and directed by Michael Roemer, whose only well-known previous feature was the skillful Nothing but a Man (1964), about the experiences of a black couple living in Alabama. Finding that life has passed him by, Harry gamely tries to buy his way into middle-class respectability, even though his wife despises him and he’s a total stranger to his kids. In the course of conducting business, he passes through a picaresque succession of locations and noisy events–bar mitzvah, fashion show, dog-training session, and an endless stream of parties–yet the movie’s pace is leisurely, the humor quiet and affectionate in striking contrast to the brassy world he moves through. Beautifully shot (by coproducer Robert M. Young, a director in his own right) and cast with a wonderful bunch of unknowns (who include Ben Lang, Maxine Woods, Henry Nemo, Jacques Taylor, Jean Leslie, Ellen Herbert, and Sandra Kazan), this is both a lovely piece of filmmaking and an exquisitely detailed portrait of a milieu and period, sealed as if in a time capsule.… Read more » 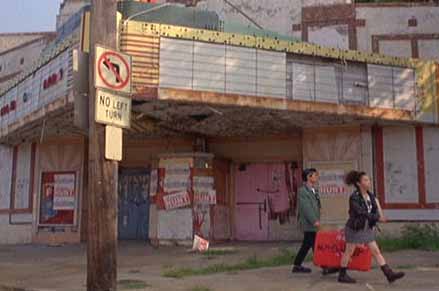 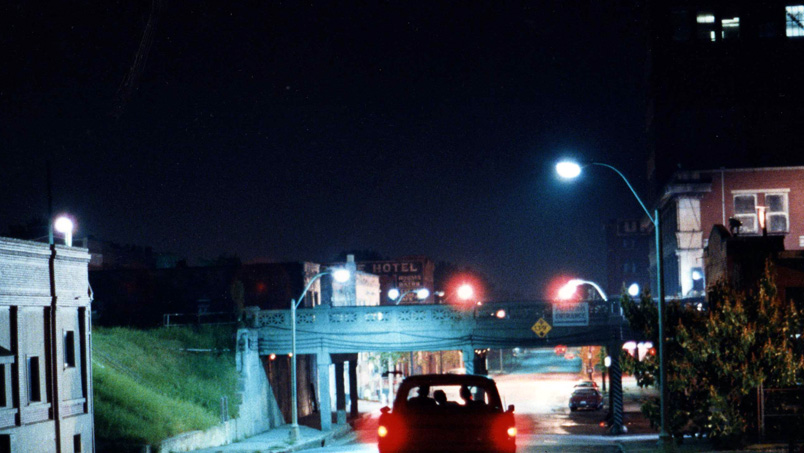 Mastery is a rare commodity in American movies these days, in matters both large and small, so when a poetic master working on a small scale comes into view, it’s reason to sit up and take notice. Jim Jarmusch’s second feature, Stranger Than Paradise, won the Camera d’Or at Cannes in 1984 and catapulted him from the position of an obscure New York independent with a European cult following — on the basis of his first feature, Permanent Vacation (1980) — to international stardom.

As the first — and so far only — filmmaker informed by the New York minimalist aesthetic to make a sizable mainstream splash, Jarmusch had a lot riding on his next films, and he has acquitted himself admirably. He hasn’t sold out to Hollywood or diluted his style, and, unlike most of the few other contemporary American independents to make it big, he has managed to maintain rigorous control over every aspect of his work, from script to production to distribution.… Read more »

This last program in a four-part series is probably the most interesting and far ranging. It takes us all the way from an early film by Bruce Conner (Cosmic Ray, 1961) and an excerpt from Nam June Paik’s 1973 Global Groove to some fascinating recent explorations by Kit Fitzgerald and Paul Garrin (with Ryuichi Sakamoto), Bob Snyder (with his own music), and Carole Ann Klonarides and Michael Owen (with Christian Marclay). (Film Center, Art Institute, Columbus Drive at Jackson, Sunday, February 11, 7:15, 443-3737) … Read more »

The remarkable Daniel Day-Lewis plays the remarkable Christy Brown, an Irishman born with a severe case of cerebral palsy who eventually taught himself to paint and write with his left foot, in a film adapted by director Jim Sheridan and Shane Connaughton from Brown’s autobiography. Far from milking this subject for conventional sentimentality, the filmmakers use it as the basis for an engaging and idiosyncratic character study. Lewis’s performance is necessarily a bit showy–one has to strain at times to understand all his dialogue because of the character’s contorted features–but he puts on a terrific drunk scene, and for all his character’s travails, the film as a whole winds up as surprisingly upbeat. With Brenda Fricker (also very fine) as Brown’s mother, Alison Whelan, Kirsten Sheridan, Declan Croghan, Fiona Shaw, and Cyril Cusack. (Esquire)… Read more »

Howard Brookner’s 1985 documentary profile of the now legendary avant-gardist William S. Burroughs, assembled from some 80 hours of interview footage. Overall an interesting, serious job, and the more controversial aspects of Burroughs’s past and personalitysuch as his misogyny and his slaying of his wifeare squarely confronted. (JR)… Read more »

A bit mislabeled — the French title is Une Affaire de Femmes, which translates better as Women’s Business — Claude Chabrol’s accomplished and generally uncharacteristic period film (1988), loosely adapted from a nonfiction book by lawyer Francis Szpiner, gives a plausible and wholly unsentimental account of a housewife and mother in occupied France (Isabelle Huppert at her finest) who becomes an abortionist and is sent to the guillotine for it. Married to a French soldier (Francois Cluzet) who’s in a POW camp, she doesn’t want to sleep with him after his return; she soon becomes the family breadwinnera tough survivor who’s also helping other women out. Chabrol’s mise en scene and his handling of the period and performances are masterful. In French with subtitles. 110 min. (JR)… Read more »

Eric Rohmer’s uncharacteristic first feature (1959) is the flavorsome and poetic account of a musician (Jess Hahn) who finds himself homeless in Paris for a summer and turns into a street bum. Touching and often funny, and providing a memorable look at Paris during the summertime, this footloose film may be preferred to Rohmer’s better crafted but decidedly less funky subsequent work. With cameos by Jean-Luc Godard, Stephane Audran, and other French New Wave colleagues. (JR)… Read more »

The Hunt For Red October

Like many such efforts, this leaden 1990 cold-war thriller, adapted from Tom Clancy’s best-selling novel, tries to make the CIA more competent and sophisticated than it is. Here CIA analyst Alec Baldwin tries to figure out why the Soviet nuclear submarine Red October, commanded by renegade Sean Connery, is approaching North America’s eastern seaboard without authorization. Adapted by Larry Ferguson and Donald Stewart and directed by John McTiernan (Predator, Die Hard), the film mechanically uses the crosscutting technique made famous by Kubrick’s Dr. Strangelove without any of its wit or focused energy. With Scott Glenn, James Earl Jones, Sam Neill, Joss Ackland, Tim Curry, Peter Firth, and Courtney B. Vance. 135 min. (JR)… Read more »

Offensive and inept treacle that shockingly demonstrates what a lot of talented or reputable peopleincluding actors Robert De Niro, Sean Penn, and Demi Moore, screenwriter David Mamet, and director Neil Jordanwill do for money. Set near the Canadian border in 1935 and very loosely based on a mediocre 1955 Hollywood comedy of the same title, which was in turn derived from a French farce, the film follows the misadventures of two escaped convicts (De Niro and Penn) who impersonate priests in order to elude a search party. It’s a reasonable enough premise for a comedy, but the filmmakers lazily treat it as what James Blish once called an idiot plota story in which everything happens because every character involved is an idiotwithout bothering to make it witty or even vaguely plausible, and solve most of their dramatic problems by unloading enough fake piety (including a contrived religious miracle) to exploit reverent and irreverent viewers alike. Mamet, of course, already has a record of doing hackwork on other people’s pictures, but not even the silliest and most cynical elements in The Postman Always Rings Twice or The Untouchables approach the amateurish exposition and dialogue here, which are made even dumber by all three cardboard leads and their improbable Brooklyn accents.… Read more »

Tragedy Of A Ridiculous Man

Bernardo Bertolucci’s 1981 film about a self-made cheese magnate (Ugo Tognazzi) in northern Italy whose son is apparently kidnapped by political terrorists. While his French wife (Anouk Aimee) tries to raise the money for the ransom, Tognazzi becomes friends with the two leftists (Laura Morante and Victor Cavallo) who have been sent to him as go-betweens. Perhaps the least known of Bertolucci’s features, it is far from the least interesting. In Italian with subtitles. 116 min. (JR)… Read more »

This is the least well known of the madcap satirical comedies of Jim Abrahams and David and Jerry Zucker (Airplane!, The Naked Gun), and by all counts the weirdest. But the richness of its ideas makes it my favorite. The plot combines the rock musical with the spy thriller (not to mention assorted other genres), and the comic invention is fairly constant. With Val Kilmer, Lucy Gutteridge, Christopher Villiers, Omar Sharif, and Peter Cushing (1984). (JR)… Read more »

The Mass Is Over

Writer-director-actor Nanni Moretti is one of the brightest stars in contemporary Italian comedy, and, in the opinion of many European critics, the most interesting Italian director to have come along in years. This 1985 feature is less formally and thematically audacious than his subsequent Palombella rossa, about the political and ideological soul-searching of an Italian communist water-polo player, but it still gives one some idea of what makes Moretti distinctive: here he’s a former 60s radical converted to the priesthood who bumbles his way through well-intentioned encounters with parishioners that usually end in mutual incomprehension. 96 min. (JR)… Read more »

Elia Kazan now admits that he directed this adaptation, his last Hollywood film, for the money. Unfortunately, it looks it. Not that F. Scott Fitzgerald’s overrated fragment about Hollywood in the 30swhich trains its rather indiscriminate hero worship on Monroe Starr, a producer modeled after Irving Thalbergis a gem to begin with. But given the talented castRobert De Niro (especially good as Starr), Tony Curtis, Robert Mitchum, Jeanne Moreau, Jack Nicholson, Donald Pleasence, Ingrid Boulting, Ray Milland, Dana Andrews, Theresa Russell, John Carradine, and Anjelica Hustonit does seem like a bit of a waste. Harold Pinter’s cold and gnomic script seems partly to blame, as well as interfering producer Sam Spiegel; but if you forget that you’re supposed to be seeing something meaningful or important, this is pretty watchable (1976). (JR)… Read more »