How To Make Love To A Negro Without Getting Tired

An amiable but otherwise fairly aimless French Canadian picture about bohemian life in Montreal that centers on a Haitian emigre (Isaach de Bankole) writing his first novel, his intellectual African roommate (Maka Kotto), and the numerous white women they attract (including, among others, Roberta Bizeau and Miriam Cyr). The bohemian ambienceand, alas, the sexual politicssuggest the late 50s and early 60s. An adaptation by Dany Laferriere of his own lightly satirical autobiographical novel, coscripted by coproducer Richard Sadler and directed by Jacques W. Benoit (1989). (JR)… Read more » 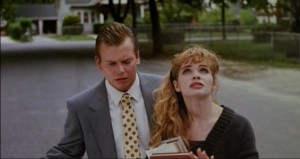 A highly intriguing if not always fully successful first feature (1990) by independent writer-director Hal Hartley, shot in his hometown on Long Island, gives us, among other characters, a mechanic mistaken for a priest (Robert Burke) returning from a prison sentence, a politically alienated teenager (Adrienne Shelly), and the teenager’s mercenary redneck father (Christopher Cooke). Fantasies about global annihilation obsess the teenager, fantasies about money obsess her father, and fantasies about a pair of murders apparently committed by the mechanic obsess almost everyone else. The unvarnished quality of some of the acting limits this effort in spots, but the quirky originality of the story, characters, and filmmaking keeps one alert and curious. With Julia McNeal, Mark Bailey, and Gary Sauer. (JR)… Read more »

A delightful small picture in an era when such things are no longer supposed to exist, this quirky comedy follows the adventures of a trio of bank robbers (Bill Murray, Geena Davis, and Randy Quaid) who pull off an ingenious job but then find it difficult to get out of New York City; Jason Robards plays the police chief who is alternately hot and not so hot on their trail. Based on a novel by Jay Cronley, the screenplay by Howard Franklin, codirected by Franklin and Murray (both making directorial debuts), manages to live up to the demands of a thriller without sacrificing character to frenetic pacing, and the film exudes a kind of sweetness that never threatens to become either sticky or synthetic. All the lead actors are funny and creative while keeping their characters life-size (to my taste, this is Murray’s best work), and they’re given a very pleasant backup by Bob Elliott (of the former radio team Bob and Ray), Philip Bosco, Phil Hartman, Kathryn Grody, and Tony Shalhoub, among others (1990). (JR)… Read more »

This adaptation of Scott Turow’s best-selling novelabout an idealistic prosecutor (Harrison Ford at his best) who becomes the prime suspect in the murder of a colleague (Greta Scacchi) with whom he’s had an adulterous affairis a top-notch courtroom drama that will keep you guessing if you haven’t read the book; even if you have, it is still a very well crafted story, directed by Alan J. Pakula (Klute, All the President’s Men), who collaborated on the script with Frank Pierson, and effectively shot by Gordon Willis. While it never reaches the level of Anatomy of a Murder, which is probably the high point in this genre, it shares with that film a complex view of the judicial system that makes the multiple plot twists part of an overall vision, and Paul Winfield rivals Joseph Welch in the earlier film by making the most of (read hamming up) his juicy part as the judge. The remainder of the castincluding Brian Dennehy, Raul Julia, Bonnie Bedelia, and John Spencerare never less than capable, and Pakula and Ford are especially good in handling the nuances of sexual obsession (1990). (JR)… Read more »

A frankly outrageous comedy from West Germany by Rudolph Thome, part two of his Forms of Love trilogy. Odd yet entertaining in a head-scratching sort of way, the poker-faced plot concerns a young, serious, and rather inexperienced male philosopher who is loved and catered to by three beautiful young women, all of whom eventually devote their lives to taking care of and pleasing him (1988). (JR)… Read more » 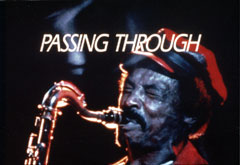 One of the rare fiction features about the jazz world made by a black filmmaker — and arguably much more important than Mo’ Better Blues, though it’s rarely shown. This 1977 film by Larry Clark, written by Ted Lange, follows a young saxophonist (Nathaniel Taylor) recently released from prison who tries to deal with the political aspects of his profession with the help of an older musician (Clarence Muse). Original and thoughtful, this is a very special first feature, with a feeling for the music that’s boldly translated into film style. (JR) 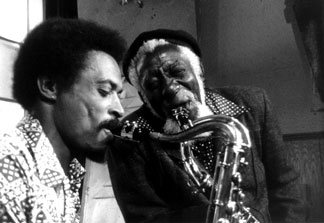 Italian cult favorite Dario Argento (The Bird With the Crystal Plumage) directed this violent and offbeat horror feature (1987) set in the celebrated La Scala opera house, where an unorthodox production of Macbeth is being presented. After the diva is injured, her understudy suffers a string of brutal attacks and tortures, among them being forced to watch the murder of her lover. Also known as Terror at the Opera; different versions run 88 and 107 minutes. (JR)… Read more »

Spike Lee’s fourth feature (1990) combines some of the cast members from Do the Right Thing (including Lee himself, Giancarlo Esposito, Joie Lee, Robin Harris, Bill Nunn, and John Turturro) with a theme from She’s Gotta Have It (promiscuous protagonist gets comeuppance) to tell the story of a dedicated jazz musician (Denzel Washington) whose tunnel vision gets him into trouble. Though it’s full of striking visual ideas and actorly turns, it never fully convinces; the characters and plot are too familiar and predictable, and Lee’s continuing awkwardness with musicextending here to Branford Marsalis’s jazz numbers, a characteristically overblown score by Bill Lee, and the use of a few jazz classicsplaces too low a premium on silence and sustained listening to allow even the best of the music to register as it should. On the plus side, Cynda Williams is sensational, and some of the experimental aspects of the editing are refreshing. 127 min. (JR)… Read more »

Louis Malle is generally at his worst when he ignores the parochial aspects of his worldview and assumes that he can do anythingsuch as, in this 1989 feature, make a movie that evokes Jean Renoir and La Regle du Jeu. An elderly woman (Paulette Dubost, who played the heroine’s maid in the Renoir film) living in the Gers region of France with her 60-year-old son (Michel Piccoli) dies unexpectedly in May 1968, when widespread strikes have brought France to the brink of revolution, and her large and varied family gathers to squabble over her possessions and bury her. Milking this situation for boulevard farce, black comedy, and facile jeersthe very opposite of Renoir’s generosity, humanity, and richnessMalle is too busy elbowing the spectator in the ribs to capture anything more than the most superficial sense of the characters, all of whom we’re glibly invited to feel superior to. With Miou-Miou and Michel Duchaussoy. In French with subtitles. 108 min. (JR)… Read more »

Denys Arcand’s first feature after The Decline of the American Empire sounds unpromising but turns out to be both watchable and entertainingwhen it’s not taking itself too seriously. It’s a satire that centers on a Montreal actor (Lothaire Bluteau) who’s putting on an avant-garde passion play and the effect that it has on him and his small team of players (Catherine Wilkening, Johanne-Marie Tremblay, Remy Girard, and Robert Lepage)a multifaceted comic meditation on contemporary attitudes. The consideration of what sort of impact Jesus would have on the modern world has informed films as great as Dreyer’s Ordet and as pretentious as Dassin’s He Who Must Die; nowhere near as good as the former or as bad as the latter, Arcand’s 1989 film is provocative, thoughtful, and at times both sad and funny. 119 min. (JR)… Read more »

Two middle-aged women who have lost their husbandsthe widowed owner of a health food store (Marlo Thomas) and the recently abandoned wife (Elaine May) of an executive (Peter Falk)uneasily but triumphantly join forces when they find themselves the joint victims of a murder plot, in a comedy thriller written by costar Jeannie Berlin (Elaine May’s daughter) and Laurie Jones, and directed by Sandra Seacat. Seacat, a longtime associate of the Actor’s Studio, seems more comfortable with her fine castwhich also includes Olympia Dukakis and, in a cameo, Melanie Griffiththan with the mechanics of filmmaking per se, and it takes the movie a while to get started; but once it does, the funnier elements in the script (such as the New Age satire), the charisma of the actors, and the persuasive (and unpushy) feminist message glide one past the relative uncertainties in the storytelling. And it’s nice to see both Berlin and May collaborating in a movie again. (JR)… Read more »

A wistful Talmudic scholar from the city gets a job as a tutor with a rural peasant family and finds romance in Edgar G. Ulmer’s first Yiddish-language film (1937), based on a popular play by Peretz Hirschbein and codirected with Jacob Ben-Ami. (Presumably Ben-Ami handled the actors while Ulmer was in charge of the camera.) A sweet mixture of domestic sitcom, soap opera, Jewish folklore, and Ulmer’s strikingly angled and characteristically dreamy mise en scene; with Herschel Bernardi and Michael Goldstein. (JR)… Read more »

First-year film student (Matthew Broderick) at New York University finds himself working for an apparent Mafia chieftain (Marlon Brando) with a surprisingly close resemblance to Don Corleone in The Godfather, in a delightful, imaginative screwball comedy written and directed by Andrew Bergman (So Fine). Though Bergman is more accomplished as a comic writer than as a director (his credits include Blazing Saddles, The In-Laws, and Big Trouble), his madcap ideas carry the picture, and Brando’s wonderful low-key performanceless a parody of his Don Corleone than a revised-and-corrected life-size versionnever falters. Sweet and warm as well as manic, this is full of loopy surprises, and the supporting cast (including Penelope Ann Miller, Bruno Kirby, Steve Bushak, Maximilian Schell, and Bert Parks, playing himself in his film debut) is uniformly fine (1990). PG, 102 min. (JR)… Read more »

This delightful 1989 pop-fantasy musical about Valley girls and extraterrestrials gives the talented English director Julien Temple an opportunity to show his stuff in an all-American context. The results are less ambitious and dazzling than his Absolute Beginners, but loads of fun nevertheless: his satirical yet affectionate view of southern California glitz is full of grace and energy. Nicely scripted by costar Julie Brown, Charlie Coffey, and Terrence E. McNally; with Geena Davis, Jeff Goldblum, Jim Carrey, and Damon Wayans. 100 min. (JR)… Read more »

Ducktales: The Movietreasure Of The Lost Lamp

The Disney people in France offer the first Uncle Scrooge McDuck animated feature, produced and directed by Bob Hathcock from a script by Alan Burnett. While the animation isn’t top drawer, the plot and characters are fairly diverting. Scrooge with his niece, three nephews, and an apparent derivation of Gyro Gearloose named Launchpad fly to North Africa and uncover a lost treasure, including a magic lamp containing a genie (a subdued version of Daffy Duck) who grants them three wishes apiecewhile villain Merlock and his Arab servant Dijon plot to get the goodies back. Ideologically speaking, this seems a lot more self-aware than the Disney cartoon features of the 40s and 50s; the plot’s charting of the Arab takeover of Scottish-American wealth makes the story seem more up-to-date than the Indiana Jones epics, and Scrooge’s miserliness is also a bit kinder and gentler (a la Bush) than it used to be, perhaps in keeping with the same overall strategy. With the voices of Alan Young, Richard Libertini, Christopher Lloyd, and Rip Taylor. (JR)… Read more »