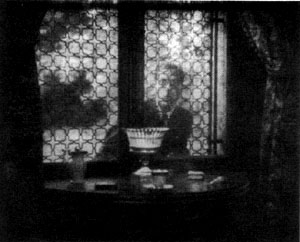 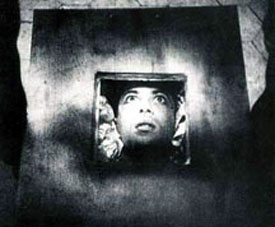 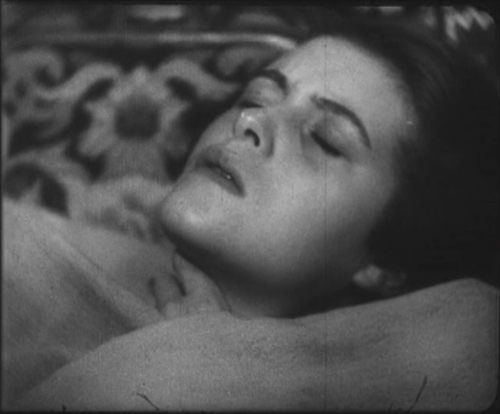 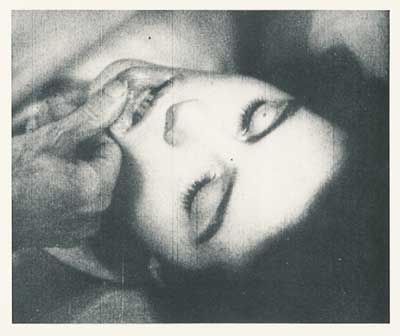 An interesting if unevenly acted independent feature by Chicago native Norman Loftis, strikingly shot in black and white on the streets of New York, about a young black petty criminal (Richard Barboza) and his relationships with other criminals, his mother, and his girlfriend (Carolyn Kinebrew). Eclectic in its brushes with modernist techniques, it’s not always successful, but it’s certainly worth a look (1988). (JR)… Read more »

The Sky’s The Limit

A moody wartime Fred Astaire musical (1943), full of period flavor, in which Astaire plays a flier on leave who meets and falls for a news photographer (Joan Leslie); musical highlights include My Shining Hour and Astaire dancing alone to his own choreography in One for My Baby. With Robert Benchley, Robert Ryan, and Elizabeth Patterson. (JR)… Read more »

This campy horror movie about the Lilith legend is dreadful on every countscript (coproducer Joe Augustyn and Walter Josten), direction (Dominique Othenin-Girard), and acting (Isa Andersen as Lilith, and, as her diverse victims, Karen Black, Linden Ashby, Doug Jones, and Gary Hudson), although the fact that it regards sex with even more disgust than the darkest moments of David Lynch may give it some limited distinction. Still, it’s so strident and unpleasant that I suggest you take a pass. With Debra Feuer and Helen Martin. (JR)… Read more »

Barry Gifford’s beautifully written picaresque novel about southern lovers on the run, though essentially literary, could have worked as a movie had David Lynch shown some fidelity to the realistic context. Despite several over-the-top interpolationsmainly references to Elvis and The Wizard of Oz and a nutty mobster straight out of Twin PeaksLynch manages to shoehorn in a surprising amount of Gifford’s material, but uses most of it like sofa stuffing. Nicolas Cage and Laura Dern give their all to the lead parts, but they’re handicapped by Lynch’s indifference to characters (as opposed to figures), and the other actors are used so narrowly that they’re mere icons. Willem Dafoe is outfitted with stumpy teeth and a pencil mustache a la John Waters, leading one to the grim hypothesis that the most aesthetically nuanced of the former midnight moviemakers is taking his cues from the least. At least Waters cares about most of his freaks; for Lynch they’re mainly exploitation fodder that seems to come straight out of junior high. 124 min. (JR)… Read more »

Clint Eastwood assuredly directs this adaptation of Peter Viertel’s roman a clef about the events preceding the filming of The African Queen, with Eastwood himself playing the John Huston characterwho decides to shoot a movie in Africa as an excuse to hunt elephants. In a daring departure from his usual roles, Eastwood doesn’t so much impersonate Huston as offer a commentary on him and on macho bluster in general, and thanks to the beautifully structured script by Viertel, James Bridges, and Burt Kennedywhich also has a lot of interesting things to say about colonialism and Hollywood (both separately and in conjunction with one another)it’s a devastating portrait of self-deceiving obsession, and a notable improvement on Viertel’s book in terms of economy and focus. With Jeff Fahey, George Dzundza, Alun Armstrong, Marisa Berenson, Timothy Spall, and Mel Martin (1990). (JR)… Read more »

Michael Almereyda’s first feature (1989) as director (he later made Nadja and a likable modern-dress Hamlet) is a daffy and endearing portrait of an eccentric family in Kansas that includes a soda-pop tycoon (Harry Dean Stanton) and a would-be pop singer (Crispin Glover); Lois Chiles plays Stanton’s fiancee, the hostess of a religious TV show for kids. Full of off-center humor and sidelong observations about some bizarre but lovable people and their cultural distractions, it’s marred only by an inappropriate music score by Hans Zimmer. Based on Mary Robinson’s novel Oh!; with Suzy Amis, Dylan McDermott, Jenny Wright, Lindsay Christman, Charlaine Woodard, Tim Robbins, and William S. Burroughs. 93 min. (JR)… Read more »

An exceptionally kinky and violent Japanese experimental feature by Shinya Tsukamoto (1989) that’s a prime candidate for midnight cult status. The dialogue is minimal, but the principal meanings are clear enough: this is a highly fragmented, frequently pixilated account of a man and woman, both partially transformed into metal, copulating and mutilating each other with passion and energy. Basically a surreal heavy-metal fantasy like the Mad Max pictures, with gory, slimy textures that recall Eraserhead, and over the top in every respect, Tetsuo: The Iron Man contains enough frenetic motion that you probably won’t be bored, though you may find yourself worn out before the 67 minutes are over. This is obviously not for every tastebut if you like it, there’s a fair chance you’ll like it a lot. (JR)… Read more »

This is a pretty stupid comedy in spots, with holes wide enough to drive trucks through, and director Arthur Hiller is as clunky as ever, but the cast is so funny and likableabove all, costars Jim Belushi and Charles Grodin, and newcomer Loryn Locklinthat they almost bring it off in spite of itself. The plot is basically Trading Places with added complications: Belushi plays a car thief who contrives to break out of jail in order to attend a Cubs game in Los Angeles; Grodin is an overorganized advertising executive with a neglected wife (Veronica Hamel) who gets sent to LA by his boss to clinch an account. Their paths cross in the LA airport, and thanks to various mishaps, the convict finds himself impersonating the executive at the boss’s Malibu mansion and romancing the boss’s daughter (Locklin) while the executive is mugged, loses his identity, and gets chauffeured around by a former classmate (Anne DeSalvo) whom he can’t stand. The script by Jill Mazursky (daughter of executive producer Paul Mazursky) and Jeffrey Abrams is strictly hit-or-miss, and at times not very nice to some of the female characters, but the charisma of the actors glides one past many of the rough edges.… Read more »

A beautiful European woman who speaks no English is relentlessly pursued through a cemetery, Chelsea, and a London flat by a camera crew in this 76-minute feature made by Yoko Ono in collaboration with John Lennon in 1969. Though this is no more boring or vapid than the other Ono and Ono-Lennon films I’ve seen, it lasts much longer; candor compels me to admit that I didn’t make it all the way to the end, but I didn’t have the impression that any further revelations were in store. The apparent inspiration was Ono’s anger about the photographers who hounded her and Lennon during this period, and the familiar notion that camera surveillance constitutes a form of rape; what makes it exceedingly unpleasant is that the film seems to be perpetuating this form of cruelty without conveying any new insights about it. (One hopes the victim was at least paid well for her distress.) (JR)… Read more »

Directorial debuts by actors are most often inauspicious, and films set in no particular country or period are usually worth avoiding. But Bob Hoskins’s first feature as a director, with an original script that he cowrote (with Nicole De Wilde), is a remarkable effort in many respects. During a long war in an unspecified European country, a young recruit named Tom (Dexter Fletcher) injures his officer during an enemy attack and flees from the camp. Disguising himself as a mute madwoman, he is taken in by a gypsylike band headed by Hoskins, whose daughter (Zoe Nathenson) becomes Tom’s lover. This film, which feels like a western in certain spots and a medieval fantasy in others (without ever really becoming either), belongs to no clearly established category, though the ambiguity about both genre and gender, as well as the picaresque and pastoral qualities, occasionally suggests the equally uncategorizable and even more exquisite Sylvia Scarlett (1935). From the opening shot, Hoskins shows a genuine camera sense, and he proves to have a fine sense of ensemble acting as well. He also knows how to take full advantage of the beauties of nature and landscape (the film was shot in Czechoslovakia, with production design by Jiri Matolin).… Read more »

Steve Martin plays a mobster who turns state’s evidence against his buddies and hides out in a small town in California, where he and other squealers get back into business in a buddy comedy written by Nora Ephron and directed by Herbert Ross. Script and direction are both fairly slapdash, but the actors and the overall sweetness keep this chugging along on some level (in spite of the one-noted aspect of Martin’s funny but limited impersonation of an Italian hood). Rick Moranis plays the FBI agent in charge who winds up as Martin’s buddy; Joan Cusack (especially good) is an assistant district attorney a full head taller than Moranis whom he winds up romancing. With Melanie Mayron, Carol Kane, and Bill Irwin. (JR)… Read more »

This comedy by Peter Wang (A Great Wall), a Chinese American filmmaker and former laser scientist, concerns a Chinese American laser scientist (Marc Hayashi) in New York, divorced and with a Jewish mother, who accidentally kills his assistant in a lab experiment and finds himself, through the influence of his brother-in-law (Tony Leung), dealing in arms on the international black market. Wang himself plays a jokey and philosophical police detective who narrates the story. Shot by Ernest Dickerson, Spike Lee’s usual cinematographer, this is a nice filmgently funny in some spots and wry in othersbut not a very dynamic one. With Sally Yeh (1988). (JR)… Read more »

This is an early and rather choice effort from Spanish filmmaker Pedro Almodovarhis second feature, made before he went slick and lost much of his funkiness. The varied cast of characters includes a onetime nymphomaniac named Sexilia who’s a member of a rock band, a gay Arab prince, a Lacanian psychotherapist, and assorted transvestites, punks, and Iranian fundamentalists. Cheerfully slapdash and high-spirited in the farcical John Waters manner, although one may get irritated at times with Almodovar’s wholesale rip-offs of other films’ musical scores (Miklos Rozsa is a particular favorite), his feeble flashbacks, and occasional heartlessness in choosing his sources of humor (e.g., a dry cleaner who periodically forces his daughter to have sex with him). Still, it’s much livelier than Women on the Verge of a Nervous Breakdown and Tie Me Up! Tie Me Down! With Cecilia Roth, Imanol Arias, Fernando Vivanco, Helga Line, and Marta Fernandez-Muro (1982). (JR)… Read more »