Tom Selleck plays Matthew Quigley, the best marksman in the world, who leaves the wild west for Australia in the 1860s to work for a wealthy British cattle rancher (Alan Rickman), until he discovers that his boss is a genocidal meanie who wants to wipe out the aborigines; Laura San Giacomo plays Crazy Cora, another American a long way from home, whom Quigley takes under his wing. In fact, this very old-fashioned liberal western in ‘Scope, directed by Simon Wincer from a script by John Hill, has a hero who’s so superhuman, virtuous, and universal in his appeal — the aborigines, who clearly consider him the Great White Father, call him the spirit warrior — that he makes Roy Rogers seem like both an amateur and a degenerate. Nevertheless, as a kind of winsome and naive throwback to the sort of scenic, action-packed western that people used to believe in, this is fairly enjoyable stuff. (JR) 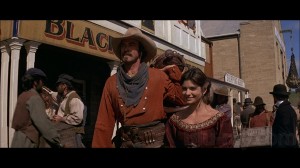