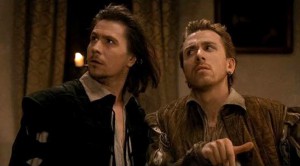 Tom Stoppard freely adapts, directs, and all but destroys his own enjoyable and provocative absurdist play about two minor characters in Hamlet, Rosencrantz and Guildenstern (Gary Oldman and Tim Roth), victims of a drama taking place in the wings that they can neither understand nor control. Critic Kenneth Tynan suggested that the play may have been the first to use another play as decor; if so, then the film uses two plays — Hamlet and Rosencrantz and Guildenstern Are Dead — and often the consequences are even more confusing than Stoppard could have intended. I can’t imagine a play less suited for a film adaptation, although Stoppard might have turned this to his advantage had he confronted that paradox. Instead he tries to open up a work that depends upon a sense of claustrophobic limbo, then undermines that approach by focusing the camera so tightly on the characters that he muddles our sense of spatial continuity. In Stoppard’s play, Hamlet is something semi-inexplicable that happens to Rosencrantz and Guildenstern, while the screenplay turns it into something they’re obliged to chase after; unfortunately, Stoppard’s sense of film is so inferior to his feeling for the stage that he makes the same compromises and reductions a Hollywood hack might have brought to the material. The film certainly has its moments; but moments is all they are. With Richard Dreyfuss, Iain Glen, Donald Sumpter, and Joanna Miles (1990). 118 min. (JR) 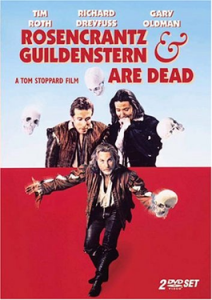