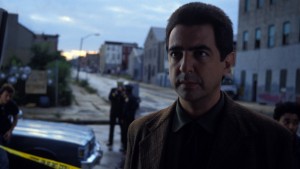 David Mamet shares with Ernest Hemingway a mannerist style of macho dialogue made up of short sentences and repeated phrases that lends itself to self-parody as well as parody. In this second step down the ladder from the promise of his first picture (House of Games), he seems to be approximating Hemingway in his mawkish For Whom the Bell Tolls period. Joe Mantegna plays an alienated cop who implausibly discovers his Jewish roots through a couple of cases he’s assigned to, and finds himself manipulated as much by Jewish terrorists as by his superiors on the police force. Despite the occasional snap and crackle of Mamet-talk at its most surreal (“They couldn’t find Joe Louis in a bowl of rice”), the movie is just plain silly when it isn’t merely unbelievable (the usually astute Mantegna, alas, never once springs to life), with a good many unsuspenseful suspense sequences and apolitical political ruminations. W.H. Macy, Natalija Nogulich, Ving Rhames, Rebecca Pidgeon, and Vincent Guastaferro are among the costars (1991). (JR)