The Bonfire of the Vanities 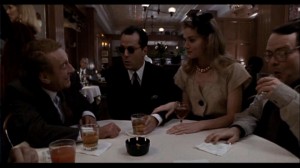 It seems almost impossible that someone could vulgarize and coarsen Tom Wolfe’s best-selling novel any further, but leave it to director Brian De Palma, working here with a script by Michael Cristofer, to plumb uncharted depths. Wolfe’s conservative, page-turning satire pretending to be centrist is the tale of Sherman McCoy, a young multimillionaire bond trader (Tom Hanks) who takes a wrong turn and winds up in the south Bronx, where his car hits a young black man, whose companion may have been trying to mug McCoy. The compromising circumstance of McCoy’s mistress being in the car with him doesn’t help matters when he finds himself at the center of political machinations involving among others a black religious leader (John Hancock), a district attorney running for mayor, and a down-and-out alcoholic reporter. It’s easy enough to accept the unconvincing Brit journalist of the original being turned into an American narrator played by Bruce Willis. But the novel — informed by some sophistication about New York politics and life-styles even as it refrained from entering the consciousness of a single female or nonwhite character — is predicated on our never knowing (or caring too much) what actually happened in the south Bronx; the movie removes such ambiguity, couldn’t care less about accuracy (a white teacher at a ghetto high school is seen waxing his expensive sports car), turns the mistress (already a conniving bitch) into a bimbo, gets most of its kicks from moronic dialogue (including a truly offensive gag about AIDS), and then wraps things up with a self-righteous sermon by a black judge (Morgan Freeman) — a white judge in the novel — that concludes, Go home and be decent people. Racist, misogynist, and moronic even in incidental ways, this is a movie for Andrew Dice Clay fans, although it’s nicely photographed by Vilmos Zsigmond. (JR)