From the Chicago Reader (December 18. 1992). I was reminded of this capsule by Thom Andersen’s references to it when he reviewed The Crying Game  at length for the Reader, in an  essay reprinted in his excellent recent collection, Slow Writing. — J.R. 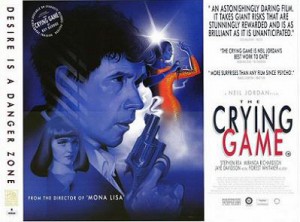 An adroit piece of story telling from Irish writer-director Nell Jordan (Mona Lisa, The Miracle) that is ultimately less challenging to conventional notions about race and sexuality than it may at first seem. Like other Jordan features, this one centers on an impossible love relationship, and the covert agenda of the plot is to keep it impossible by any means necessary. The theories of literary critic Leslie Fiedler about the concealed and unconsummated lust of the white male for the nonwhite male in such American classics as Huckleberry Finn and Moby Dick seem oddly relevant to certain aspects of this tale about an IRA volunteer (Stephen Rea) who assists in the kidnapping of a black British soldier (Forest Whitaker) and subsequently becomes involved with his mulatto lover (Jaye Davidson) in London; the plot, held in place by a parable about a scorpion and a frog that’s filched from Orson Welles’s Mr Arkadin, features a startling twist about halfway through; among the cleverly concealed safety nets that hold this movie’s conceits in place is an implied misogyny that only becomes evident once the story is nearly over. Still, this thriller gives you an entertaining run for your money and some offbeat frissons along the way. With Miranda Richardson (somewhat limited here by a narrowly conceived part) and Jim Broadbent (the father in  Life Is Sweet); the three leads are first rate. (Fine Arts) 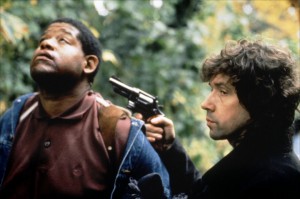