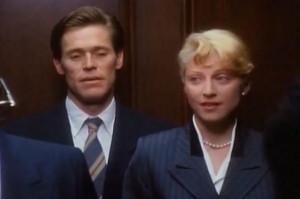 After the unusual promise of Say Anything . . . , Cameron Crowe’s 1992 second feature as a writer-director, another romantic comedy, is so lightweight that you’re likely to start forgetting it before it’s even over. (Could the earlier movie’s distinctiveness be attributed in part to producers Polly Platt and James L. Brooks?) The skimpy plot follows half a dozen singles (Bridget Fonda, Matt Dillon, Campbell Scott, Kyra Sedgwick, Sheila Kelley, and Jim True) who drift around Seattle. (JR)… Read more »

Silent Witnesses And twilight Of A Woman’s Soul

Two short features by the prerevolutionary Russian auteur Evgenii Bauer. Twilight of a Woman’s Soul (1913), which I’ve seen, shows Bauer’s adept use of decor in his mise en scene; the film centers on the rape of a wealthy philanthropist by a slum dweller she’s trying to help. Silent Witnesses (1914), which I haven’t seen, also pivots on class differencesin this case an aristocratic woman and the maid in her Moscow mansion. Also on the program: Vasilii Goncharov’s The Pedlars (1910), a short that adapts the story line of a folk song and uses natural settings. (JR)… Read more »

The west coast’s answer to Woody Allen, Henry Jaglom lacks Woody’s verbal wit, but has tons of New Age understanding and 60s references to movies being movies to replace it with. Here he plays an independent writer-director-actor very much like himself at the 1989 Venice film festival, where he runs into an English former lover and leading lady (Suzanne Bertish) and embarks on a romance with a young French journalist (Nelly Alard) whose seriousness is certified by her being obsessed with his work. The self-infatuation on view is so thick you couldn’t cut it with a chain saw, and when the movie shifts to Venice, California, where the smitten French beauty follows the filmmaker, the society of admirers (including the filmmaker’s then-current girlfriend, Melissa Leo)all talking and acting with the same flaky earnestnessgets even gooier. Threaded through all this are talking-head interviews with real women about the failure of real-life romance to match up with movie romance; Jaglom cuts them together as if they’re the same person, yet another version of his wistful self repeating more or less the same glib homilies found in Can She Bake a Cherry Pie?, Always, and Someone to Love. Don’t expect to find any curiosity about people or places here; the film makes it pretty clear at the outset that Jaglom is so much in touch with his own feelings that he has little left to learn about either movies or the human condition (1992).… Read more »

Josephine Baker plays a poor African woman educated and trained by a white writer and passed off as an Indian princess. This 1935 French feature was directed by Edmond T. Greville and written by Baker’s manager and lover, Pepito Abatino. It’s an intriguing follow-up to her previous French feature Zou Zou, ideologically and otherwise. In French with subtitles. 77 min. (JR)… Read more »

For all their human decency and liberal intelligence, the films of John Sayles are generally more memorable for their intentions than for their achievements; exemplary yet stodgy efforts, more literary than cinematic, they rarely linger with any sort of vibrancy. But Sayles has gradually gotten better over the years, and this 1992 drama set in the Louisiana swamplands may be as good as anything he’s done. It’s about the adjustments made between an embittered former soaps actress (Mary McDonnell) turned paraplegic by an auto accident and her nurse from Chicago (Alfre Woodard), who proves to be undergoing a kind of rehabilitation of her own. Sayles develops the characters and introduces us to the small-town milieu at a leisurely pace (the film runs 135 minutes), but this clearly works to the film’s advantage; Woodard, in particular, responds to this extra space by turning in the best performance I’ve seen from herfull of small, offbeat notations about a woman who’s keeping most of her past and emotions firmly under wraps. There are moments when one is quite aware that Sayles, who hails from Schenectady, is far from his home turf (his grasp of a couple of catty local women who visit the paraplegic smacks of Yankee caricature), but by and large his natural curiosity about the region enhances our own, and there are many appealing character sketches among the secondary parts here (from David Strathairn and Vondie Curtis-Hall, among others).… Read more »

This is the first feature by the great Swedish cinematographer Sven Nykvist, cowritten with Lasse Summanen, and it’s a worthy and assured debut. Based on an actual event during a severe drought in Sweden in the 1860s, the story calls to mind Victor Hugo’s Les miserables, which was published in the same decade: a desperate farmhand (Stellan Skarsgard), afraid that his wife (Ewa Froling) and baby daughter will starve, steals and slaughters an ox belonging to the farmer he works for (Lennart Hjulstrom); after he confesses his crime to the local pastor (Max von Sydow), he’s sentenced to a harsh flogging and life imprisonment. Not surprisingly, what’s most impressive here is the way this film looksespecially the unforced and lovely handling of landscape and periodand the purity of the performances, including those of Ingmar Bergman veterans Liv Ullmann and Erland Josephson, who appear in smaller parts (1991). (JR)… Read more »

John Goodman stars as the screen’s number one shock expert and ballyhoo specialist, Lawrence Woolsey (affectionately based on William Castle), who turns up in Key West in 1962 to present a preview of his latest horror B-film, Mant, about a man transformed by radiation into a giant ant. This highly enjoyable and provocative teenage comedy, set during the Cuban missile crisis, was directed by Joe Dante (Gremlins, Innerspace) and written by Dante regular Charlie Haas and Jerico, who all have a lot of fun cooking up the black-and-white Mant and other period absurdities, especially those provoked by war fever. They’re also pretty adroit in suggesting some of the absurdities of the early 90s (Woolsey’s scare tactics are a somewhat more benign version of the government’s, and the movie cleverly exploits the parallels for all they’re worth). With Cathy Moriarty, Simon Fenton (an English teenager who does an astonishing job of sounding American), Omri Katz, Kellie Martin, Lisa Jakub, and a number of enjoyable character actors including Jesse White, John Sayles, and Dick Miller. (JR)… Read more »

It’s hard to make a docudrama with this subjecta couple (Nick Nolte and Susan Sarandon) with a five-year-old son who has a rare and mysterious degenerative disease called adrenoleukodystrophy (ALD)sound good, but in its own quiet way this is astonishing, both as a medical detective story that sustains taut interest over an extended running time and as a piece of cinema combining unusually resourceful acting and direction (by Australian George Miller, best known for his radically different Mad Max pictures and The Witches of Eastwick). Trained as a doctor, Miller, who wrote the script with Nick Enright, brings to this material an infectious political passion to make difficult concepts lucid to everyone and to place medical science in the hands of people who can do something about itwhich means that this movie winds up having a great deal to say about AIDS as well as ALD, not to mention medical bureaucracies and power structures in general. Both Nolte, as an Italian economist, and Sarandon, as an Irish-American linguist, are in top form, and the secondary castwhich includes half a dozen actors as Lorenzo as well as Peter Ustinov, Kathleen Wilhoite, Gerry Bamman, and Margo Martindalenever let them down. If any movie deserves to be called inspirationala much-abused term that I hesitate to applythis one certainly does.… Read more »

One of the first independent American features to gain an international reputation, this 1953 effort by Morris Engel, Ruth Orkin, and Ray Ashley, about a little boy running away to Coney Island mistakenly believing he’s killed his brother, won the top prize at the Venice film festival and paved the way for many subsequent low-budget features; today it’s probably most interesting as a fragrant period piece. With Richie Andrusco, Rickie Brewster, Winifred Cushing, and Will Lee. (JR)… Read more »

The main reason to see Alexandre Rockwell’s flaky, independent black-and-white comedy (1992) about an aspiring filmmaker (Steve Buscemi) on New York’s Lower East Sidea movie one feels was made every few months during the late 60sis John Cassavetes veteran Seymour Cassel, playing a petty crook with a heart of gold who suddenly appears to the hero like a fairy godfather (no pun intended, despite his compulsive displays of physical affection) to serve as his producer. The movie seems conceived according to the joint emblems of Jim Jarmusch (who appears in a cameo, along with Carol Kane) and Cassavetesrather like the first episode in Jarmusch’s Night on Earth, which used Gena Rowlands as an emissary from Cassavetes’s world. Here Cassel seems to be a variation on the noble/foolish hero played by Ben Gazzara in Cassavetes’s The Killing of a Chinese Bookie, but you certainly don’t have to know this source to respond to Cassel’s enormous funds of charm and charisma. (There’s also a wonderful performance by Sully Boyer as one of the crook’s incidental victims.) With Jennifer Beals, Pat Moya, and Will Patton. R, 90 min. (JR)… Read more »

Upscale, decadent, obsessional sex between a member of the British parliament (Jeremy Irons) and the fiancee (Juliette Binoche) of his journalist son (Rupert Graves) heads the bill of fare in this lugubrious and rather contrived 1992 adaptation of Josephine Hart’s novel. Though the actors are intermittently interesting to watchand Miranda Richardson (as the hero’s wife) and Leslie Caron (as the heroine’s mother) are even better than thatthe story eventually capsizes into cheap melodrama. Because this whole project seems detached at times to the point of indifferenceno one ever seems to be having any fun, including the filmmakerseven one’s clinical interest eventually begins to evaporate. Louis Malle directed a script by David Hare; with Ian Bannen and Peter Stormare. R, 111 min. (JR)… Read more »

The resourceful Bill Duke, best known in the past as an actor (Car Wash, American Gigolo) and as a director of black pictures (A Rage in Harlem, Deep Cover), turns his directorial hand toward Broadway-matinee white materiala comedy adapted by Ivan Menchell from his play about three Jewish widows in Pittsburgh (Ellen Burstyn, Olympia Dukakis, and Diane Ladd) who meet at their husbands’ graves. Duke’s sensitive handling of actors remains so acute that he and his able cast (which also includes Danny Aiello, Lainie Kazan, and Christina Ricci) periodically transcend their humdrum material. (Burstyn in particular is very strong, and when she embarks on a romance with a Jewish widower played by Aiello the movie moves into high gear.) It’s also worth noting that the Jewish milieu is adroitly and persuasively sketched in without being overplayed in the customary Broadway-matinee manner. (JR)… Read more »

A remarkable noir effort by the neglected but formidable writer-director Cyril Endfield (Try and Get Me!, Zulu), shot on a B-minus budget in six days and running just over an hour, crams so much hallucinatory plot into one 24-hour period that the results have some of the hysteria as well as the dreamy drift of subsequent apocalyptic thrillers like Kiss Me Deadly. William Gargan plays a reporter who goes chasing after an album with an argyle cover that implicates Americans who collaborated with Nazis during the war, and all sorts of gruff types go chasing after him as a result. Most impressive here, apart from Endfield’s signature pessimism about human weaknesses, are the ingenious visual and temporal strategies used to condense the narrative materialeverything from a dripping faucet to signify the death of one character to the parsimonious use of voice-over imagery. (JR)… Read more »

Amos Gutman’s Israeli feature about the unconsummated love between two men (Sharon Alexander and Gal Hoyberger) from Tel Aviv, one of whom is HIV-positive. Serious and thoughtful, if not very energetic, it won first prize at the 1992 Jerusalem film festival. (JR)… Read more »