Made to commemorate the 40th anniversary of Cinecitta, the famous Roman film studio, Federico Fellini’s 1987 feature, done in the pseudodocumentary style of Fellini’s Roma and The Clowns, is a fairly tired trip down memory lanenot entirely without its charms but a far cry from prime Fellini. The film alternates between Fellini’s (fictional) preparations to shoot an adaptation of Kafka’s Amerika and his memories of his first trip to Cinecitta as a young journalist (Sergio Rubini) to interview a glamorous movie star. After Marcello Mastroianni turns up in the present, Fellini invites him and a Japanese documentary film crew to visit Anita Ekberg’s rural villa, where they watch silent clips from Fellini’s La dolce vita. The film bears the same sort of relation to earlier Fellini that the dehydrated Love on the Run bears to earlier Truffaut. (JR)… Read more » 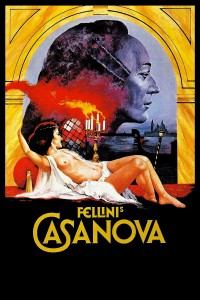 What the world wanted from Fellini’s epic account of the famous 18th-century lover (Donald Sutherland) was hardly the dark, disturbingly jaundiced, alienated view of eroticism offered here (1976). But as one of the late flowerings of the director’s claustrophobic studio style at its most deliberately artificial, this is a memorable work, helped along by Nino Rota’s music and Danilo Donati’s Oscar-winning costumes. With Tina Aumont, Cicely Browne, John Karlsen, Carmen Scarpitta, and Clara Algranti. (JR) 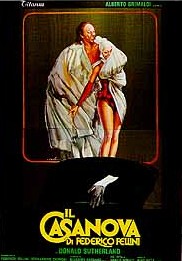 A Far Off Place

Mikael Salomon, the cinematographer on The Abyss and Far and Away, directs his first feature (for Disney), and it’s a creditable joban effective adventure story about two teenagers (Reese Witherspoon and Ethan Randall) fleeing from the ivory poachers who’ve just killed their parents and crossing the Kalahari Desert with the help of a young bushman (Sarel Bok). Adapted by Robert Caswell, Jonathan Hensleigh, and Sally Robinson from two books by Laurens van der Post, the film has a nice feeling for the terrain (shooting was done in Zimbabwe) as well as for the (mainly unstereotypical) characters. With Jack Thompson and Maximilian Schell. (JR)… Read more »

I haven’t read the Edith Wharton novel, and I can’t say this slow (albeit stately) American Playhouse-BBC TV adaptationwritten by Richard Nelson and directed by John Maddenmakes me want to. Set in rural Massachusetts around the turn of the century, the film concerns the tortured, crippled, and solitary title figure (Liam Neeson); the story of how he got that way is told in flashback to a recently arrived minister (Tate Donovan). It’s a very American story about love (a little) and guilt (a lot) involving two women (Patricia Arquette and Joan Allen) and more repression than you can shake a stick at (1992). (JR)… Read more »

Damned In The Usa

Paul Yule’s simple talking-head documentary, made for England’s Channel Four in 1991, was attacked in court by the Reverend Donald Wildmon, who called it blasphemous and obscene; Wildmon unsuccessfully tried to get it barred from the U.S. and sued the film’s producers for $8 million, which is why it was a little late reaching our shores. The film was supposedly lethal because it presents both sides of the then-ongoing art-censorship debates and actually lets us see contested Robert Mapplethorpe photographs and Andres Serrano’s Piss Christ and hear 2 Live Crew music so we can make up our own minds about them. What it doesn’t do, alas, is present both sides of the debate on federal arts fundingan understandable omission considering the English audience the film was originally made for, like most audiences in the world, values art and education enough to dismiss out of hand the con position as it’s routinely expressed in this country, which usually defines federal support of business as freedom and federal support of art as enslavement, without worrying about who’s being freed and who’s being enslaved. (Only in America, it seems, can such a debate happily ignore what the rest of the world thinks about the subject.) Without being especially brilliant or original, this film remains compulsively watchable simply because it clarifies what people are willing to do in order to limit our cultural choices.… Read more »

Cop And A Half

They don’t come much feebler than this slapdash, formulaic comedy thriller, which teams a very tired looking Burt Reynolds (and a very tired looking hairpiece) with a kid (Norman D. Golden II) who’s supposed to be cute as a bug and seems to be reading his lines off teleprompters. (Ruby Dee, as his grandmother, is the only one in the cast who doesn’t seem locked into a TV-style delivery.) With Ray Sharkey, Holland Taylor, and Frank Sivero; directed, if that’s the word, by Henry Winkler from an Arne Olsen script. (JR)… Read more »

A potent and highly engrossing 1992 documentary by Joe Berlinger and Bruce Sinofsky about a 1990 murder trial in New York State that attracted national media attention. The case involved the death of one of the Ward brothers, four illiterate, reclusive, and eccentric bachelors who lived together on their dairy farm in a two-room shack with no running water. One of the siblings confessed to suffocating his ailing brother as a mercy killing but later retracted his statement, implying that he was being framed. It’s amazing how many primal issues are engaged in this real-life mystery story, and Berlinger and Sinofsky, who followed it from start to finish, do a superb job of keeping us on the edge of our seats. (JR)… Read more »

Pointless remake of the charming 1950 George Cukor comedy. Melanie Griffith imitates Judy Holliday (even down to her wardrobe) as a crooked businessman’s girlfriend who learns to think on her own during an extended visit to Washington, D.C. John Goodman imitates Broderick Crawford as the vulgar businessman, and, heaven help us, Don Johnson takes over William Holden’s part as the intellectual writer hired by the gangster to educate his moll. For the most part, Garson Kanin’s dialogue (as adapted by Albert Mannheimer) is retained in Douglas McGrath’s script, giving the proceedings a faintly anachronistic ring (apart from a couple of mildly amusing additions and some understandable paring away of the original’s gooey-eyed patriotism). Cukor’s black-and-white original is no imperishable classic, but the memories of its three wonderful leads are insulted by this pale color imitation. (The gin rummy game with Griffith and Goodman instead of Holliday and Crawford is enough to ruin a night out.) Directed by Luis Mandoki (White Palace) and costarring Edward Herrmann. (JR)… Read more »

Samuel L. Jackson plays a famous black playwright who moves to an exclusive all-white resort, where the locals mistake him for a burglar in his own home. The sheriff (Dabney Coleman), who’s up for reelection and wants to mask the faux pas, enlists a petty criminal (Nicolas Cage) in a phony kidnapping scheme. Cage is the only actor allowed to do riffs on his assigned part, something he takes full advantage of; the others are stuck with their two-dimensional satirical profiles, which grow increasingly tiresome and unyielding as the comic plot predictably unfolds. (Even Jackson’s development is too simpleminded to create a full character.) E. Max Frye wrote and directed this first feature; Michael Lerner, Margaret Colin, Brad Dourif, and Bob Balaban costar. (JR)… Read more »

The Adventures Of Huck Finn

Yet another unmemorable adaptation of the great Mark Twain novel, this one with a presumptuous title change, an understandable deletion of Tom Sawyer (probably the single most problematic element in the novel), an unforgivable indifference to the book’s lyricism, and way too much music on the sound track. As played by Elijah Wood, Huck is no longer a working-class boy but a middle-class pretty boy pretending to be working-class, which undermines the meaning of everything; Jim (Courtney B. Vance), who’s become politically correct, sports an earring; and not even Robbie Coltrane and Jason Robards as the king and duke (to replace the book’s Dauphin and Duke) can make up the difference. Even if your kids won’t read the book, it’s worth paying them to keep them away from this substitute. Written and directed by Stephen Sommers. (JR)… Read more » 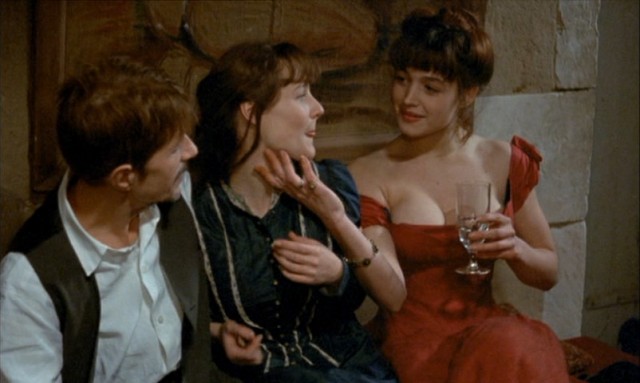 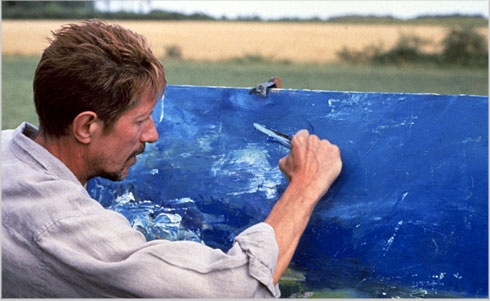 A revisionist look at the last 67 days of Vincent van Gogh’s life by the highly talented writer-director Maurice Pialat (The Mouth Agape, A nos amours, Under Satan’s Sun), with singer-songwriter-actor Jacques Dutronc — the Bob Dylan of Paris and the lead in Godard’s Every Man for Himself — in the title part. Ironically, this 155-minute French art movie shows the painter’s existence, including his sex life, to be a lot happier than is generally depicted — much sunnier, in fact, than Vincente Minnelli’s or Robert Altman’s films on the same subject; in any case, it certainly qualifies as a personal work. (The period re-creations of Jean Renoir and John Ford remain the key reference points.) While the results shed little light on van Gogh’s painting, some painters I know are smitten with this film, and the mise en scene and the period flavor are both quite remarkable. With Alexandra London, Gerard Sety, Bernard le Coq, Corinne Bourdon, and Elsa Zylberstein (1992). In French with subtitles. (JR) 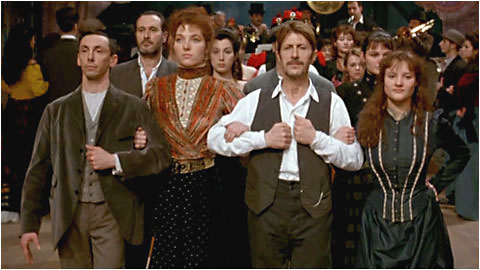