A reflection on last year’s riot in Los Angeles put together for the grass-roots TV series Not Channel Zero–The Revolution, Televised and produced by Black Planet Productions, an inventive New York media collective with an afrocentric perspective and a refreshing way of combining aesthetic imagination with political savvy. However incendiary it may sound, its “Top 11 Reasons to Loot or Riot” is actually a model of reasoned analysis, which can also be said of many of the other discourses featured. A member of the Black Planet collective will be present for a discussion. Chicago Filmmakers, 1229 W. Belmont, Friday, April 30, 8:00, 281-8788. … Read more » 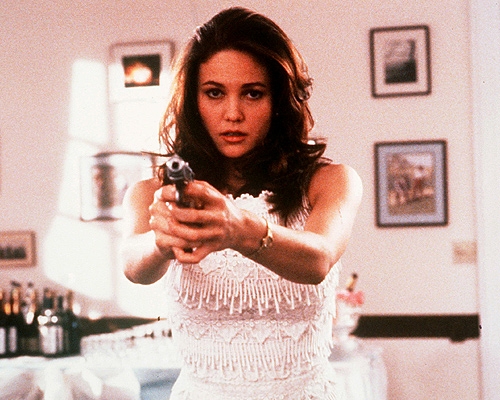 Directed and written by Stacy Cochran

I finally got to feel that I had to unpack large crates by swallowing the excelsior in order to find at the bottom a few bent and rusty nails, and I began to nurse a rankling conviction that detective stories are able to profit by an unfair advantage in the code which forbids the reviewer to give away the secret to the public — a custom which results in the concealment of the pointlessness of a good deal of this fiction and affords a protection to the authors which no other department of writing enjoys. — Edmund Wilson, “Why Do People Read Detective Stories?”

In the half century that has passed since this famous long sentence was written, it seems that a lot more than detective stories has fallen under the kind of protection Wilson objected to. Miramax’s campaign to protect the “surprise” of The Crying Game has been so vociferous that one feels it may only be a matter of time before the clergy starts inveighing against tattletale reviewers.… Read more »

A four-hour film about modern China made in 1972 by Michelangelo Antonioni. Though I’ve only been able to sample it, I believe it’s one of the very few comprehensive and serious Western documentaries on the subject. (The only other one that I’m aware of is Joris Ivens and Marceline Loridan’s equally scarce six-part, 12-hour How Yukong Moved the Mountains, made four years later.) While the Chinese government invited Antonioni to make this film, and Western viewers at the time regarded it as a sympathetic portrayal, the results was widely denounced by the Chinese when it first appeared–a fascinating instance of radically divergent interpretations of the same images and camera angles. It now appears that the denunciation was partially dictated by government policies that had relatively little to do with Antonioni, and it’s worth pointing out that the Chinese offered a public apology to the filmmaker in 1980. For the past two decades or so this work has been completely unavailable in the U.S., and it still has no distributor, so this may well be your only chance to see it. Film Center, Art Institute, Columbus Drive at Jackson, Sunday, May 2, 1:30, and Thursday, May 6, 6:00, 443-3737.… Read more »