The Shadow Of Angels

Daniel Schmid’s somewhat kitschy and decorative 1976 film of Rainer Werner Fassbinder’s controversial play, which some called anti-Semitic when it was first presented onstage because of its treatment of a Jewish businessman; another important character is a prostitute (Ingrid Caven) who serves as a mother-confessor to the businessman, among others. An interesting contrast to Fassbinder’s own films of this period, it eschews Hollywood melodrama as a model and tries for something more operatic; it’s probably one of Schmid’s best features. With Ulli Lommel and Irm Hermann. 108 min. (JR)… Read more » 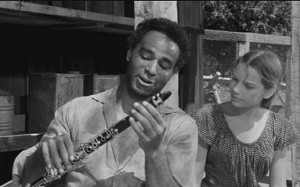 Luis Buñuel‘s two English-language films, this picture and the 1952 The Adventures of Robinson Crusoe, are among the most neglected of his middle-period Mexican films — made between his early surrealist masterpieces (Un chien andalou, L’age d’or, Land Without Bread) and the late European features (Viridiana, That Obscure Object of Desire) that revived his world reputation. The Young One is a taut comedy-thriller from 1961, set on a game-preserve island off the Carolina coast, though shot, surprisingly, in Mexico. A northern black jazz musician (Bernie Hamilton), fleeing a trumped-up rape charge involving a white woman, arrives on the island and is briefly befriended by a young teenage orphan (Key Meersman), the granddaughter of a handyman who’s just died. An unfriendly game warden (Zachary Scott) who’s taken a shine to the girl tries to kill the musician; eventually a local preacher (Claudio Brook) and the game warden’s boatman (Crahan Denton) also turn up. A satiric look at both racism and sexual hypocrisy that refuses to take sides, this dark, sensual comedy of manners, adapted quite freely from a Peter Matthiessen story by the gifted blacklisted screenwriter Hugo Butler (under a pseudonym) along with Buñuel, is full of poetic asides and unexpected developments, revealing Buñuel‘s dark, philosophical wit at its most personal.… Read more »

A disconcerting mix of gritty realism and blunt contrivance, this is an English picture about a Pakistani country-western band in Southall, Londonan odd enough subject to hold our interest even if the story never settles down into a consistent strategy. The movie keeps twitching restlessly as it takes us through violent gang confrontations, diverse rebellions that recall 50s and 60s rock movies, asides on racism, some pretty good country-western numbers, and a potential love story between the Pakistani hero (Naveen Andrews) and a battered Asian housewife (Sarita Choudhury) that never really develops. The film’s humor mainly remains undeveloped as well, but at least director David Attwood and writer Harwant Bains keep things moving. (JR)… Read more »

For better and for worse, Ross McElwee’s compulsively diaristic films and his persona in them are relatively lightweight, whether McElwee’s exploring the contemporary south while looking for a girlfriend in Sherman’s March (1986) or dealing with marriage, the death of his father, and the prospect of his own fatherhood, as he is in this 1993 feature. The laid-back charm of his method is undeniable, but it can also wear thin. When his old, life-affirming friend Charleen (a McElwee regular) turns up to regenerate this movie after a long patch of glum musings, one is more than grateful. (JR)… Read more »

An entertaining 1983 documentary by Alan Rudolph (Choose Me, Mortal Thoughts) culled from more than 60 hours of footage chronicling debates between Watergate felon G. Gordon Liddy and LSD guru Timothy Leary at various campuses across the nation, as well as their personal exchanges during the tour. Part of the joke is how much they seem to have in common at certain points, despite their ostensible ideological and temperamental differences. (JR)… Read more »

The Remains Of The Day

Though I haven’t read the Kazuo Ishiguro novel that this James Ivory (director)-Ismail Merchant (producer)-Ruth Prawer Jhabvala (writer) feature adapts, informed sources suggest that the biting class commentary in the original is sacrificed here for a failed love story (1993). Certainly the two leads, Anthony Hopkins and Emma Thompson, are adroit and compelling as the servants of James Fox’s befuddled lord and Nazi sympathizer, and Fox and Christopher Reeve (as the American who eventually purchases the lord’s estate) turn in fine performances as well. But Jhabvala’s tactics for revealing the lord’s Nazi sympathies are awkward and primitive, and the script’s violations of the butler’s viewpoint to show us more of Thompson’s life make for confusion. The actors keep this interesting, but as a story it drifts and rambles; with Peter Vaughan, Hugh Grant, Michael Lonsdale, and Tim Pigott-Smith. (JR)… Read more »

Puzzle Of A Downfall Child

Very much a film of its period (1970), when Alain Resnais’ subjective and lyrical editing patterns were at the height of their influence, this is the first feature of former fashion photographer Jerry Schatzberg. It deals with the memories and imaginings of a fashion model (Faye Dunaway) who’s attempting to recover from a nervous breakdown in a beach cottage, and shares the fragmented, mosaic form as well as some of the melancholia of the 1968 Petuliathough not much of its saving humor. I didn’t warm to this film, but given the quality of some of Schatzberg’s subsequent work, especially Scarecrow and Reunion, and the claims made for this picture by Michel Ciment, Schatzberg’s biggest champion, it may deserve a second look. The script is by Five Easy Pieces’s Adrien Joyce, writing under the pseudonym Carol Eastman; the secondary cast includes Barry Primus, Viveca Lindfors, Barry Morse, and Roy Scheider. (JR)… Read more »

Sweetie and An Angel at My Table have taught us to expect startling as well as beautiful things from Jane Campion, and this assured and provocative third feature (1993) offers yet another lush parablealbeit a bit more calculated and commercially mindedabout the perils and paradoxes of female self-expression. Set during the last century, this original story by Campionwhich evokes at times some of the romantic intensity of Emily Brontefocuses on a Scottish widow (Holly Hunter) who hasn’t spoken since her childhood, presumably by choice, and whose main form of self-expression is her piano playing. She arrives with her nine-year-old daughter in the New Zealand wilds to enter into an arranged marriage, which gets off to an unhappy start when her husband-to-be (Sam Neill) refuses to transport her piano. A local white man living with the Maori natives (Harvey Keitel) buys the piano from him and, fascinated by and attracted to the mute woman, agrees to sell it back to her a key at a time in exchange for lessons, with ultimately traumatic consequences. (JR)… Read more »

Bruce Joel Rubin, the writer of Jacob’s Ladder and Ghost, is both writer and director of another spiritual parablethis one about a prospective father (Michael Keaton) who discovers he has cancer and may not live to see the baby; he decides to make a video about his life to leave behind. Nicole Kidman plays the wife and mother, and she and Keaton both make the occasional longueurs of this sincere and sensible if fairly predictable story worth sitting through. Surprisingly, there’s a fair amount of comedy along the way, and far from being depressing the movie offers as sunny a prospect of coming to terms with death as one can imagine. Haing S. Ngor plays Keaton’s insightful Chinese doctor and spiritual guide, and the other costars include Bradley Whitford, Michael Constantine, and Rebecca Schull. (JR)… Read more »

Mutiny On The Bounty

By reputation, this three-hour 1962 remake of the Charles Laughton-Clark Gable MGM classic (1935) was the first production in which Marlon Brando really ran amok, with various delays causing the budget to skyrocket. Hardly anyone was pleased with the results. Charles Lederer adapted the Charles Nordhoff and James Hall novel about a mutiny on an 18th-century British naval vessal en route to South America; Lewis Milestone directed. With Trevor Howard, Richard Harris, Hugh Griffith, and Tarita. (JR)… Read more »

Another chapter in the ongoing struggle between the talented Mike Figgis (Stormy Monday, Internal Affairs, Liebestraum) and studio recutters and reshooters, this intriguing but unsatisfying love story between a manic-depressive (Richard Gere at his best) and his sympathetic therapist (Lena Olin) makes memorable uses of both its west-coast settings and its cast (which also includes Anne Bancroft), but, like Liebestraum, it seems to come to us with several parts missing. The screenplay is by Eric Roth and Michael Cristofer; with Tom Irwin, Delroy Lindo, Bruce Altman, and Lauren Tom. (JR)… Read more »

This is the most neglected of Sergei Eisenstein’s features, his last completed silent picture (1929), also known as The Old and the New. It’s a bucolic epic about the Soviet struggle to collectivize agricultural production, and it’s far from his least interesting or exciting film, though some critics have made it sound that way by noting that the most famous sequence involves a cream separator. For the record, it is a thrilling sequencepart of Kenneth Anger’s Eaux d’artifice is modeled directly after itbut it’s far from the only thing this rich, poetic, and sometimes quite funny film has to offer. Recommended. (JR)… Read more »

The second feature (1993) of Steve Kloves, writer and director of The Fabulous Baker Boys, doesn’t really work as story or drama, but the first half, with its beautifully captured images of west Texas by Philippe Rousselot, is a powerful, poetic evocation of southern sleaze. All four stars offer complex and finely tuned portraits with a pungent aftertaste. Dennis Quaid plays a vending-machine supplier in flight from his troubled past, Meg Ryan is the woman he becomes involved with, James Caan is his father, and talented newcomer Gwyneth Paltrow (Blythe Danner’s daughter) plays the father’s young girlfriend. Sydney Pollack served as executive producer. (JR)… Read more »

Jeff Bridges and Rosie Perez star as plane-crash survivorsthe first made ecstatic by the experience, the second shattered by the loss of her baby sonwho try to make sense of their lives afterward, in a rather confused film adapted by Rafael Yglesias from his own novel and directed by the once interesting (Picnic at Hanging Rock, Witness) but increasingly fatuous (Dead Poets Society, Green Card) Peter Weir. Though Bridges and Perez both do fine work playing characters in a state of shock, their efforts are largely wasted on a story that has trouble keeping its priorities straight; because we never get a sense of what Bridges was like before the accident it’s impossible to interpret his behavior afterward in a meaningful way, and what begins as a provocative narrative teaser never adds up to anything coherent. Isabella Rossellini does what she can (very little) as Bridges’s wife, while Tom Hulce does a satiric turn as a wrongful-death lawyer and John Turturro plays an airline therapist specializing in posttraumatic stress who’s alternately dopey and competent. (JR)… Read more »

Considering the degree to which Fatal Attraction and Basic Instinct are already self-parodies, writer David O’Malley and director Carl Reiner don’t have to do much to show how silly they are; in order to understand how silly this movie is, on the other hand, all you have to do is sit through it. Among other movies tweaked are Double Indemnity, Marnie, Body Heat, and Cape Fear, but the gags have little to say beyond the obvious, and before long the filmmakers are reduced to evoking the Three Stooges in order to fill space. (At least Mel Brooks, who’s just as shameless, gives you some personality to go with the clunkiness.) It’s a real pity, because Reiner has certainly been funnier and more inventive on other outings and Sherilyn Fenn makes a winsome gal Friday. With Armand Assante, Kate Nelligan, Sean Young, Chris McDonald, and Tony Randall. (JR)… Read more »