The Saint Of Fort Washington

Some colleagues trashed this powerful look at friendship among the New York homeless(1993)directed by Tim Hunter from a script by Lyle Kessler and starring Danny Glover and Matt Dillonsimply because of its subject matter; apparently, contemporary man-made tragedies are inappropriate topics for the big screen, unlike ghosts, dinosaurs, mythical serial killers, and former holocausts. But this movie gives you glimpses of the Fort Washington Armory (sheltering 700 people nightly) that recall the famous shot of the Confederate wounded in Gone With the Wind in its epic grandeur; and it tells you things about New York’s potter’s field that easily might have found their way into Pickup on South Street. This may occasionally err on the side of Dickensian sentiment, but it has so much to say about the world we live in, and says it with such grace, wit, and raw feeling, that I recommend it without qualification. With Rick Aviles, Ving Rhames, and Nina Siemaszko. R, 108 min. (JR)… Read more »

If Ken Russell invented the postmodernist biopic, Slobodan D. Pesic has taken the form to delirious extremes. Pesic directed this daffy tragicomedy about the late Russian literary visionary Danil Harms in Yugoslavia in 1988. Apart from a prologue and epilogue in color, the picture is in black and white with occasional dabs of yellow; several characters (both male and female) are played arbitrarily in drag; and among the anachronistic elements is post-50s elevator music that accompanies scenes from the 30s and 40s. Harms sounds like a fascinating figure, though something tells me this picture isn’t the best way to find out about him. Still, it can be recommended as an intriguing novelty, bursting with irreverence and eclecticism. (JR)… Read more »

An entertaining if humdrum 1993 documentary by D.A. Pennebaker and Chris Hegedus that follows Bill Clinton’s presidential campaign, with particular emphasis on master strategists James Carville and George Stephanopoulos, shot on video and transferred to film. Seeing the actual deliberations behind image making has a certain built-in interest, but I expected more surprises. 96 min. (JR)… Read more » 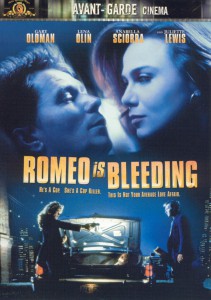 This gory, postmodernist fruit salad may be the most misogynistic piece of noir since Body Heat, though as in Basic Instinct a certain amount of giddy dominatrix worship — in this case focused on Lena Olin as an evil mobster — gets mixed into the brew of producer Hilary Henkin’s script. It’s the sort of fancy-pants movie that can have a wealthy hoodlum (Roy Scheider) threatening its hero (Gary Oldman), a crooked cop on the take, by recounting an anecdote about Robert Lowell. As in The Grifters, another exercise in Hollywood noir directed by a non-American (here it’s the Hungarian Peter Medak, who works mostly in England), one can’t easily tell whether this is taking place in the 40s or half a century later; but with so many baroque plot moves and narrative devices, and so much self-consciously ornate dialogue and voice-over narration, you’re not supposed to notice or care. The film certainly held me, and even fooled me in spots (when it wasn’t simply confusing), but when the whole thing was over I felt pretty empty. It would be facile to say it substitutes style for content; actually, it substitutes stylishness for style.… Read more »

This corrosive short feature, directed by the late Alan Clarke for British television and adapted by Jim Cartwright from his play of the same title, offers a potent look at poverty and alcoholism in Lancashire, with impressive on-location camera work and dialogue that exults in its own theatricality and musicality (rather like that of Alan Bowne in Forty Deuce and John Guare in Six Degrees of Separation). The energetic cast includes Life Is Sweet’s Jane Horrocks and Naked’s David Thewlis and Lesley Sharpe. (JR)… Read more »

As a writer-director with a well-honed sense of paranoia a la Fritz Lang, Alan J. Pakula (Klute, The Parallax View, All the President’s Men, Presumed Innocent) does a good job of adapting and directing this John Grisham thriller about a New Orleans law student (Julia Roberts) fleeing for her life, with a Washington reporter (Denzel Washington) as her only ally, after her speculative legal brief about the murder of two Supreme Court justices leads to another murderof her lover and law professor (Sam Shepard). It’s too bad that Pakula allows this 1993 movie to dawdle after its climax, but prior to that he’s adept at suggesting unseen menace and keeping things in motion. With John Heard, Tony Goldwyn, James B. Sikking, William Atherton, Robert Culp, Stanley Tucci, and, in cameos, Hume Cronyn and John Lithgow. (JR)… Read more »

The very notion of an experimental arty documentary about the great German writer Walter Benjamin (1892-1940) seems rather comic, so one may well wonder why Australian filmmaker John Hughes made this hour-long film (1992), complete with dramatized events from Benjamin’s life, interviews with intellectuals, clips from Rene Clair’s Entr’acte and Dziga Vertov’s The Man With a Movie Camera, contemporary globe-trotting that takes in the Eiffel Tower as well as the small town where Benjamin committed suicide, and loads of fabulous sound bites and printed or spoken aphorisms delivered like slogans. The fact that Hughes’s spelling is occasionally faulty seems symptomatic: there’s something faintly absurd about a film about Benjamin made for semiliterates. One can learn a little here, and I enjoyed hearing the intelligent talk of Elizabeth Young-Bruehl and Susan Buck-Morss, among others. But some of this is tacky beyond words (e.g., an Australian actor who looks like Groucho Marx reenacting Benjamin’s morphine overdose on camera). You might consider your time better spent reading or rereading Benjamin. (JR)… Read more »

One of the major essays of Chris Markerwhich automatically makes this one of the key works of our timethis remarkable 1993 video is provisionally about his friend and mentor, the late Soviet filmmaker Alexander Medvedkin (1900-’89), in the form of six video letters sent to him posthumously. More profoundly, this is about the history of Soviet cinema and the Soviet Union itself, about what it meant to be a communist, about what these things mean now. In the process of redefining these issues, Marker produces a guarded self-portrait and autocritique, implicitly asking himself what his own leftism has meant and continues to mean. Eloquent and mordantly witty in its poetic writing, beautiful and often painterly in its images, this is as moving and as provocative in many respects as Marker’s Sans soleil (1982). Not to be missed. 116 min. (JR)… Read more »

An unedifying, pretentious remake of Claude Sautet’s Les choses de la vie, upper-crust naturalism and all, this tale of a Vancouver architect (Richard Gere) torn between his mistress (Lolita Davidovich) and his wife (Sharon Stone) and teenage daughter seems put together on the popular assumption that conspicuous consumption is the very soul of drama. (The fancy flashback structure, which generates whatever narrative interest the movie can claim for itself, seems 25 years out of date.) Stone deserves some points for playing a recognizable human being while Davidovich fares less well in an underscripted part, but what sabotages the story altogether is Gere’s boundless narcissism; it overwhelms every emotion in the plot. Mark Rydell directed from a script by David Rayfiel and Marshall Brickman. (JR)… Read more »

Clearly conceived as a companion piece to Broadcast News, another portrait of a few intense individuals in a one-company town, writer-director-coproducer James L. Brooks’s comedy about Hollywood — initially an eccentric musical until the responses of preview audiences led Brooks to eliminate all but one of the musical numbers — is a fascinating if fairly discontinuous collection of fragments. It’s maddening that Brooks uncritically embraces some of the worst aspects of status quo capitalism (such as ideological manipulation and crippling short-term strategies like test marketing) while turning moral crusader over small local infractions (newscaster William Hurt faking tears in Broadcast News, or here studio executive Joely Richardson caving in to group pressure during a casting decision and trashing her own lover, character actor Nick Nolte). Maybe he should hand out the Irving G. Thalberg Award on Oscar night, though it must be admitted that his feeling for neurotic quirks and their interactions — observable in his comic portraits of a grasping mother (Tracey Ullman), a boorish producer (Albert Brooks), and a blunt audience-opinion researcher (Julie Kavner), among others– is often exhilarating. More uneven is the charting of the character actor’s bonding with his bratty six-year-old daughter (Whittni Wright), which reportedly reflects Brooks’s own adventures in parenting.… Read more »

Grass: A Nation’s Battle For Life

A fascinating (and fascinatingly dated) 1925 silent documentary by Merian Cooper and Ernest Schoedsack, the codirectors of King Kong, about a U.S. travel expedition through the mountains of Turkey and Persiamore specifically, about the annual migration of more than 50,000 Bakhtiari tribesmen with their cattle in search of fresh pastures. Topographically beautiful and historically potent. 64 min. (JR)… Read more »

The first feature (1991) of Russian critic and filmmaker Oleg Kovalov, who specializes in eccentric found-footage films, this is a wild compilation feature spanning at least half a century and suggesting at times a Soviet equivalent to The Atomic Cafe and That’s Entertainment! Playfully experimental and irreverent in sound and image, the film gets some of its eeriest effects from excerpts of a mid-50s melodrama of cold-war paranoia called The Case of Corporal Kotschetkov, in which the young hero’s beloved and her grandmother turn out to be capitalist spies. There are plenty of times when one might emerge from this skillful postmodernist frenzy wishing one knew more about the original clips, but there’s no doubt that what Kovalov has brought together is fascinating. (JR)… Read more »

Not to be confused with the John Grisham cream puff, this 1988 TV film by British director Alan Clarke is a powerful, horrifying look at middle-class thugs who start fights at soccer games. Filmed naturalistically, it was written by Al Hunter; the cast includes Gary Oldman, Lesley Manville, and Philip Davis. (JR)… Read more »