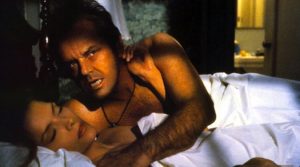 Somewhere inside this moderately watchable if ultimately incoherent star vehicle is an old-fashioned grade-Z werewolf movie crying to be born. If that were the sort of thing money could buy it would undoubtedly have been factored into the $70-million-plus budget, but it seems beyond the reach of the creative participants, who try for a vague sort of profundity instead. Jack Nicholson plays an honorable failure — a book editor about to discover that he’s being demoted and cuckolded — who comes into his own after being bitten by a wolf, an event that brings out both good and bad aspects of his latent animal nature. Michael Wadleigh’s Wolfen (1981), which also dealt with wolves in Manhattan’s Central Park, is a much more thoughtful and meaningful project; this one lurches along in fits and starts, mixing generic stereotypes (e.g., the villainy of James Spader and Christopher Plummer) with loftier (if more confused) ambitions, and winds up honoring neither art nor commerce. Mike Nichols’s direction is so-so; the two writers credited are Jim Harrison (though the film has no connection with his novel of the same title) and Wesley Strick. Michelle Pfeiffer, Kate Nelligan, and Richard Jenkins also star. (JR)