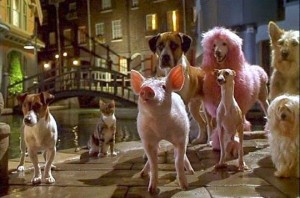 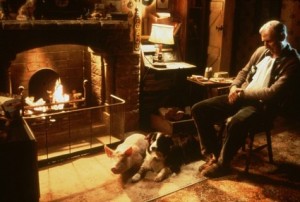 Every Girl Should Be Married

American sexual ideology circa Christmas 1948, which was when RKO released this comedy and raked in lots of loot. It stars Betsy Drake (her screen debut) as a department-store clerk who goes after Cary Grant, a pediatrician; the two actually got married soon after the movie was released, making it all look like a publicity stunt. Don Hartman directed and collaborated on the script; with Franchot Tone and Alan Mowbray. (JR)… Read more »

A major film (1989, 86 min.) by the greatest of all Iranian filmmakers, Abbas Kiarostami, this is an idiosyncratic though mainly straightforward 16-millimeter documentary about the homework done by boys in primary school, with the interviews carried out by Kiarostami himself. For all the simplicity of its approach, this film has a great deal to impart about Iran during its war with Iraq, and some of the unorthodox formal procedures carried out by Kiarostami are as provocative as in his subsequent documentary masterpiece, Close-up; moreover, the director seems every bit as adept as Truffaut at handling children with respect. In Farsi with subtitles. (JR)… Read more »

Through The Olive Trees

The social status of filmmaking among ordinary people, central to Abbas Kiarostami’s wonderful Close-up and Life and Nothing More, is equally operative in this entertaining and sometimes beautiful film. Through the Olive Trees (1994) concludes a trilogy begun with Where Is the Friend’s House?, which focused on the adventures of a poor schoolboy in a mountainous region of northern Iran. Life and Nothing More, the second and best film of the three, fictionally re-created Kiarostami and his son’s return to the area, which had recently been devastated by an earthquake, to look for two child actors from the earlier film. Through the Olive Trees is a comedy about the making of a film, mostly emphasizing the persistent efforts of a young actor to woo an actress who won’t even speak to him. Like Kiarostami’s more recent Taste of Cherry, all three films strategically elide certain information about the characters, inviting audiences to fill in the blanks and in this case yielding a mysteriously beautiful and open-ended conclusion. If you’re unfamiliar with Kiarostamione of our greatest living filmmakers and certainly the greatest in Iranthis is an excellent introduction. (JR)… Read more »

A canny, contemporary portrait of shiftlessness, this adept first feature (1993) by American independent Kelly Reichardt, set in the Florida Everglades, is about people so bored they jump at the chance to go on the lam — taking off even before they’ve committed a crime. Reichardt has an original sense of how to put together a film sequence and an effective way of guiding her cast of unknowns through an absurdist comedy of errors. With Lisa Bowman, Larry Fessenden, Dick Russell, Stan Kaplan, and Michael Buscemi. (JR)

Who would have guessed that a grisly and upsetting serial-killer police procedural (1995, 127 min.) costarring Brad Pitt and Morgan Freeman as detectives, written by a Tower Records cashier (Andrew Kevin Walker), and directed by David Fincher (Alien) would bear a startling resemblance to a serious work of art? One can already tell that this film is on to something special during the opening credits, which formally echo several classic American experimental films and thematically point to the eerie kinship between the serial killer and the policenot to mention the kinship between murder and art making that the movie is equally concerned with. The detectives are trying to solve a series of hideous murders based on the seven deadly sins, and the sheer foulness and decay of the nameless city that surrounds them, which makes those of Taxi Driver and Blade Runner seem almost like children’s theme parks, conjures up a metaphysical mood that isn’t broken even when the film moves to the countryside for its climax. Admittedly, designer unpleasantness is a hallmark of our era, and this movie may be more concerned with wallowing in it than with illuminating what it means politically. Yet the filmmakers stick to their vision with such dedication and persistence that something indelible comes acrosssomething ethically and artistically superior to The Silence of the Lambs that refuses to exploit suffering for fun or entertainment and leaves you wondering about the world we’re living in.… Read more »

The Mystery Of Rampo

The subject of this feature by former Japanese producer Kazuyoshi Okuyama is promising: the life and times of the famous Japanese mystery writer Edogawa Rampo. The film mixes Rampo’s biography with one of his stories in a way that initially suggests Hammett and Naked Lunch, but it ultimately gives in to the scattershot sleaze of Mishimait’s a sort of Lifestyles of the Rich and Decadent that bypasses early references to Vertigo and Last Year at Marienbad to become a tale of obsessive love that ultimately drowns in its mannerist self-infatuation. We’re treated to one effect after another rather than a coherent story, and the resulting spectacle is striking but tacky. With Naoto Takenaka, Michiko Hada, and Mikijiro Hira; Yuhei Enoki collaborated on the script. (JR)… Read more »

Last Of The Dogmen

For better and for worse, the plot resembles a guilty-liberal wet dream: a solitary and reluctant bounty hunter (Tom Berenger) and an equally solitary ethnographer (Barbara Hershey) discover a lost tribe of Cheyenne warriors still subsisting in the Montana wilderness, and wind up joining them. Writer-director Tab Murphy obviously means well, and intermittently charms with his pie-eyed conceit, but even the loveliness of the landscape and the talent of a well-trained dog that figures centrally in the action can’t quite make up for the sheer clunkiness of this miserably paced ‘Scope adventure story, which becomes downright unbearable whenever it resorts to a folksy narration. With Kurtwood Smith, Steve Reevis, and Andrew Miller. (JR)… Read more »

Given my unqualified admiration for Jean Genet’s The Maids, I’m not very sympathetic to the notion of another playwright going back to the crime in provincial France in the 30s that inspired Genet’s play and trying to wring something more out of it. The story concerns incestuous sisters who work for a tyrannical matron and wind up murdering her. The main contribution of Wendy Kesselman, adapting her play My Sister in the House, is to delve into the unhealthy relationship between the matron and her grown daughter. The actors impart a great deal of neurotic intensity to their roles, but the combination of an American writer, an American director (Nancy Meckler, whose main background is the English stage), and English actors all tackling a very French crime of passion failed to convince me. By and large, this is a stunt, and far too obvious in its telegraphed class contrasts (1994). With Joely Richardson, Jodhi May, Julie Waters, and Sophie Thursfield. (JR)… Read more »

Subtitled The Unlimited Readings, this 1981 Marguerite Duras feature is one of her most strongly minimalist, consisting mainly of an offscreen poetic dialogue between a sister and brother about their memories and their incestuous feelings for each other (spoken by Duras and her companion Yann Andrea) and shots of empty beaches and a virtually deserted hotel lobby where one occasionally glimpses Bulle Ogier (and, less often, Andrea). The results are not devoid of interest, but far less absorbing and resonant than Duras’ India Song and Le camion. (JR)… Read more »

A neglected early feature by Marguerite Duras (1972), produced by Luc Moullet, full of poker-faced, absurdist humor and deceptive sound cues. Jeanne Moreau and Lucia Bose sit around in a country house doing very little apart from listening to radio reports about two teenage killers in the neighborhood. Occasionally they’re joined by their two little girls (one of them named Nathalie Granger); more often we’re reminded of them by the offscreen sound of their piano lessons. On two occasions, a very young Gerard Depardieu turns up, trying to sell a washing machine and getting more than he bargains for. It’s hard to describe this beautiful miniature, but somehow it reduces the whole modern world to audiovisual shorthand; Duras’ verbal and visual terseness has seldom been put to better use. (JR)… Read more »

Such A Long Absence

Directed by Henri Colpieditor of Alain Resnais’ first two features, Hiroshima, mon amour and Last Year at Marienbadand coscripted by Marguerite Duras, this melancholy tone poem focuses on a woman who runs a workers’ cafe in a dingy Paris suburb and an amnesiac derelict she comes to believe is her long-lost husband, who apparently was deported to Germany during the war and may have died there. Decidedly pre-New Wave in its conventional narrative style, though attractively filmed in black-and-white ‘Scope, this picture, which won the grand prize at Cannes in 1961, is interesting today mainly as a haunting period piece. With Alida Valli and Georges Wilson. (JR)… Read more »

Two very different adaptations of the same children’s book by Marguerite Duras, Ah Ernesto!, about a seven-year-old boy who refuses to go to school. The first, earlier and to my mind better, is En rachachant (1982), a brilliant, rigorous, and hilarious nine-minute black-and-white short by Jean-Marie Straub and Daniele Huillet, shot by the great Henri Alekan. The second, Les enfants (1984), adapted and directed by Duras herself, is 94 minutes long and has a middle-aged actor (Axel Bougousslavsky) playing the part of Ernesto as well as a more ponderous way of wrestling with some of the same cosmic issues, though it’s still a fascinating, far from routine piece of work. Tatiana Moukhine and Daniel Gelin play the boy’s parents. (JR)… Read more »

In a performance that won her a best-actress prize at Cannes, Jeanne Moreau stars as a wife and mother living in a steel town near Bordeaux who witnesses a murder and later gets to know another person (Jean-Paul Belmondo) who saw the same crime. This seldom-screened 1960 feature was directed by Peter Brook from a script he wrote with Marguerite Duras, adapting her novel; it was Duras’ first screenplay after Hiroshima, mon amour and Brook’s first feature after The Beggar’s Opera, made seven years earlier. (JR)… Read more »

One of Marguerite Duras’ most radically minimalist features (the title means The Truck), this also happens to be one of her best, as well as one of her most accessible. Two kinds of material are intercut: a truck drives through a landscape as Duras reads aloud a script to Gerard Depardieu and replies to his questions about a truck driving through a landscape and picking up a female hitchhiker. Compared to many of this filmmaker’s other features, this might be described as Duras without duress; thanks to the skill of the writing and the filmmaking and the charisma of Duras and Depardieu, the expected monotony never entirely settles in because the play between sound and image (including the lovely Beethoven on the sound track) keeps feeding the imagination and the wit and the suggestiveness of the text are both infectious. The film also remains visually fresh throughout; even the shots of Duras and Depardieu with the script never seem purely illustrative. Check this one out. (JR)… Read more »