For the most part, this is a watchable, sexy, and intelligent first feature (1993) by Australian documentarist Susan Lambert, working with a script by Jan Cornall and a Sidney setting, about two best friends in their 30s (Victoria Longley and Angie Milliken) who create adult comic books together. Longley, who lives in the country with her partner and their young daughter, is facing a crisis because she’s pregnant and he’s having an affair with a younger woman; Milliken desperately wants to have a baby but finds herself incurably single. Parts of this movie are irritatingly coy and extraneousthe fantasy interludes stemming from the graphic novel/detective story the two women are working onbut these interruptions take a backseat to the talk and adventures the women have over a single day. (JR)… Read more »

John Travolta plays a crack fighter pilot who threatens to destroy an American city with stolen nuclear warheads, and Christian Slater is a younger pilot who’s out to stop him; John Woo directed this giddy, mindless jaunt with polish but only a modicum of personal investment from a script by Graham Yost (whose equally mindless script for Speed seems more influential here than any of Woo’s earlier pictures). With Samantha Mathis, Delroy Lindo, Frank Whaley, Bob Gunton, and Howie Long. (JR)… Read more »

Highly personal and informative, Helena Solberg’s feature-length 1994 documentary about Brazilian musical star Carmen Miranda and her complex identitiesa Broadway and Hollywood icon who caricatured Brazilian traits, a woman who became a campy bombshellis an eye-opener. A Brazilian-American herself, Solberg may have more invested in this subject than she can handle, but most of what she has to say and show is so interesting and intelligent you’re not likely to object. 92 min. (JR)… Read more »

My Life And Times With Antonin Artaud

A fascinating depiction in shimmering black and white of the last two years in the life of writer-madman-visionary Antonin Artaud (beautifully played by Sami Frey), from the viewpoint of Jacques Prevel, an obscure poet who procured drugs for him and whose diaries served as this film’s source (1993). In a lot of ways Gerard Mordillat’s movie can be read as a deadpan comedy of multiple ironies about the tolerance and respect the French accord unbearable artists. But even if you don’t take it that way, there’s plenty to look at and think about. Coscripted by film critic Jerome Prieur; with Marc Barbe, Julie Jezequel, and Valerie Jeannet. (JR)… Read more »

Zhang Yimou’s crime melodrama (1995), set in 1930 Shanghai, is far from his best work, but Gong Li is so magnificent in the lead partin what may prove to be the last of her eight collaborations with himthat you may not care. Playing a prostitute-singer who’s the concubine of the city’s overlord (who runs the opium and prostitution business and has links with Chiang Kai-shek), she performs a few stage numbers that call to mind some of Dietrich’s turns for Josef von Sternberg, though in some ways the most plausible filmic cross-reference is Billy Bathgate rather than The Devil Is a Woman. (The story is recounted from the viewpoint of a 14-year-old boy hired to keep an eye on the concubine.) The style is visually eclectic, and the story is as bleak in its allegorical implications about Chinese tyranny as any of Zhang’s previous features. 109 min. (JR)… Read more »

A Tale Of Love

Like her previous works, Trinh T. Minh-ha’s fifth film (1995), her first in 35-millimeter and her first narrative feature, is both beautiful and difficult. The difficulties begin with the title: this is not a tale, and it doesn’t really concern lovethough one of its points of departure is The Tale of Kieu, the 19th-century Vietnamese national poem of love. Set in San Francisco, the story focuses on a writer named Kieu who works for a women’s magazine and as a photographer’s model to help support her family back in Vietnam. The beauties include the aggressive music score and the oddly contrapuntal mise en scene, which often seems to have a very different agenda from that of the actors. At times a frankly erotic film that interrogates its own eroticism, it challenges the audience as well with its acting styles and disorienting means of storytelling. Clearly not for everyone, but nothing else around is even remotely like it. (JR)… Read more »

As a follow-up to his comeback performance in Pulp Fiction, John Travolta plays a likable Miami loan shark and movie buff dispatched to Los Angeles to collect on a gambling debt from a sleazy producer (Gene Hackman), in an entertaining comedy-thriller (1995) adapted by Scott Frank from the Elmore Leonard best-seller and directed with bounce (if not much nuance) by Barry Sonnenfeld (Addams Family Values). Coproduced by Danny DeVito, who also costars, this is fairly light stuff; with Rene Russo, Dennis Farina, Delroy Lindo, James Gandolfini, David Paymer, and Linda Hart. (JR)… Read more » 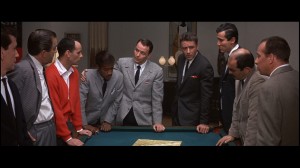 The original Rat Pack movie — a 1960 crime comedy set in Las Vegas, terminally boring if memory serves — though it made a fortune, perhaps because everyone wanted to see the cast, regardless of what they did. With Frank Sinatra, Dean Martin, Sammy Davis Jr., Peter Lawford, Angie Dickinson, Joey Bishop, Richard Conte, Cesar Romero, and Akim Tamiroff; directed by the once worthy Lewis Milestone. 127 min. (JR)… Read more »