The Truth About Cats & Dogs

The first movie directed by Michael Lehmann that I didn’t dislike, this relatively tender 1996 romantic comedy, written by former jazz disc jockey Audrey Wells, concerns a talk-radio hostess (Janeane Garofalo) who dispenses advice about pets and has self-esteem problems regarding her looks, her attractive next-door neighbor (Uma Thurman doing a Marilyn Monroe-like ingenue turn), and an intellectual English art photographer (Ben Chaplin) who through various mishaps falls for the voice and mind of the former while believing she looks like the latter. Though the basic brains-versus-beauty tension suggests a female variation on The Nutty Professor, this is a softer version of the dilemma than Jerry Lewis offerseasier to take and easier to forget. With Jamie Foxx and James McCaffrey. 97 min. (JR)… Read more »

A Gun Up Your Ass: An Interview with Jim Jarmusch 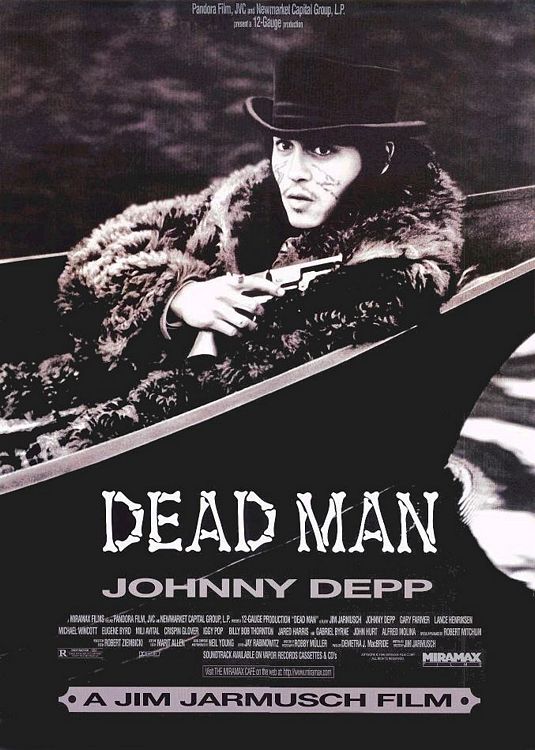 A dozen years ago, when his second feature, Stranger Than Paradise, catapulted him to worldwide fame, Jim Jarmusch seemed at the height of arthouse fashion. Having already known him a little before then, I could tell that the extent to which he suddenly became a figurehead for the American independent cinema bemused him in certain ways. Given the aura of hip, glamorous downtown Manhattan culture that seemed to follow him everywhere, how could it not? I can still recall a New York Times profile a few years back that was so entranced by his image that it suggested that, simply because Jarmusch chose to live in the Bowery, that neighborhood automatically took on magical, transcendent properties.

When Dead Man, his sixth feature, premiered at Cannes last year, it suddenly became apparent that Jarmusch’s honeymoon with the American press was over — although his international reputation to all appearances survives intact. There are multiple reasons for this, including Dead Man itself, and before getting around to this visionary, disturbing black-and-white Western — which I regard as his most impressive achievement to date — it’s worth considering what’s happened to the American independent cinema over the past decade, which has a lot to do with Jarmusch’s changed position in the media.… Read more »

Scandalously neglected and all but forgotten in recent years, Leopoldo Torre-Nilsson (1924-1978), perhaps the first world-class Argentinean director, enjoyed a certain vogue in this country in the early 60s–despite the stiff competition from France, Italy, and Japan in offering personal and stylistically expressive cinema. Among his films distributed in that era, La casa del angel (1957)–also known back then as End of Innocence–is almost certainly the most impressive, a gothic tale of female adolescence with an arresting and original flashback structure and a baroque visual style worthy at times of Orson Welles (especially in his Magnificent Ambersons mode). Written, like many of Torre-Nilsson’s other major features, by his wife, novelist and playwright Beatriz Guido–adapting in this case one of her own novels–this is a haunting and captivating mood piece that almost never turns up, a rare viewing opportunity courtesy of the Chicago Latino Film Festival. (It will screen again at the same time and place next week.) Village, Monday, April 15, 6:15, 642-2403. –Jonathan Rosenbaum

Ken Loach, perhaps the most accomplished and intelligent Marxist practitioner of social realism left in England, stretches his impressive talents to depict the Spanish civil war from the point of view of a young unemployed communist from Liverpool (Ian Hart) who joins the republican anti-Franco forces. Scripted by Jim Allen (who also wrote Loach’s Raining Stones) Land and Freedom is historically convincing as well as gripping–Loach near his passionate best. Far from offering a standard defense of the communist position, this 1995 film presents a detailed revisionist critique of the party’s betrayal of other leftist factions in Spain. With Rosana Pastor, Iciar Bollain, Tom Gilroy, and Frederic Pierrot. Music Box, Friday through Thursday, April 12 through 18. –Jonathan Rosenbaum… Read more »

Richard Benjamin directs a labored comic adaptation by Phoef Sutton and Lisa-Maria Radano of Cornell Woolrich’s I Married a Dead Man, about a poor unmarried mother (Ricki Lake) who impersonates a dead heiress and widow. Translating Woolrich’s pulpy obsessiveness and crazy contrivances into the stuff of light comedy is no easy matter, and the movie gets as far as it does mainly with the help of Lake and Shirley MacLaine, who plays Lake’s newly acquired mother-in-law. With Brendan Fraser, Miguel Sandoval, and Loren Dean. (JR)… Read more »

Kids In The Hall: Brain Candy

TV comics David Foley, Bruce McCulloch, Kevin McDonald, Mark McKinney, and Scott Thompson star in a 1996 TV spin-off, produced by Lorne Michaels, about the creation of a designer drug that makes everybody happy. It was written by Norm Hiscock and all the Kids except Foley, and directed by Kelly Makin. I think it’s supposed to be a comedy. Perhaps because no one in the cast adjusted his performance style to the big screen, I may have thought about laughing three times over the 90-some minutes. (JR)… Read more »

The ultimate exercise in dehumanizing liberals, this is a very silly 1995 black comedy about five Iowa graduate students and housemates (Cameron Diaz, Annabeth Gish, Ron Eldard, Jonathan Penner, and Courtney B. Vance) who throw a series of dinner parties in order to poison their bigoted right-wing guests and bury them in their backyard. The notion here of what constitutes a liberal (and of what constitutes a right-wing bigot) is scaled down to the level of, say, a sitcom written by Newt Gingrich during his lunch breaks. The automatic trivialization of human beings, to say nothing of political positions, is the sine qua non of this kind of goof, and you may get a fleeting kick out of it if you’re sufficiently alienated from both. Stacy Title directed the Dan Rosen script; with Nora Dunn, Charles Durning, Mark Harmon, Bill Paxton, and Ron Perlman. (JR)… Read more »

James Foley (After Dark, My Sweet, Glengarry Glen Ross) is one of the best studio directors around, and even if you feel ambivalent about the subgenre he adopts here (working as uncredited cowriter with Christpher Crowe), you can’t deny that he knows how to deliver the goods. A 16-year-old girl in Seattle (Reese Witherspoon) falls for a young man (Mark Wahlberg) with a troubled background who eventually becomes obsessed with her. Complicating the issue at least momentarily are the feelings of her own father (William Petersen) about her budding sexuality. If you’re only looking for brutal jolts you’ll probably get impatient; the buildup is at least as gradual as in Hitchcock’s The Birds, and Foley has a fine sense of shading in depicting a slightly dysfunctional family. The problem with this subgenre is the way it has to demonize and dehumanize its villains in order to produce the desired effect, which brutalizes the spectator along with the story and characters. If you can accept this limitation, this is a very efficient piece of machinery. With Alyssa Milano and Amy Brenneman. (JR)… Read more »

Robert Duvall plays an Arkansas cracker in his 60s who discovers that his biological mother was black and drives to Chicago to meet his half-brother–a policeman played by James Earl Jones–and other newly discovered relatives. Directed by Richard Pearce from an original script by Tom Epperson and Billy Bob Thornton (who also collaborated on One False Move), this picture is a labor of love that glimmers with feeling and insights at every turn, above all in its performances. Duvall is wonderful and Jones is, quite simply, magnificent (the manner in which he assigns his character a slight stammer is only one example of his perfection), while Irma P. Hall as one of the relatives isn’t far behind. With Michael Beach, Regina Taylor, and David Keith. Hyde Park, Webster Place, Ford City, Bricktown Square, Gardens, Golf Glen, Lincoln Village, McClurg Court.

One more reason why I may never get around to reading the Charlotte Bronte novel. On the other hand, I found myself absorbed in this treacly 1996 feature the way I used to be in Classics Illustrated comic books around the age of nine. Franco Zeffirelli directs a Hugh Whitemore script with some verve, and William Hurt surprised me by offering a more interesting Rochester than I would have expected from him. Anna Paquin and Charlotte Gainsbourg play Jane as a girl and young woman respectively, and vying with the landscapes are such veterans as Joan Plowright and Billie Whitelaw, not to mention Maria Schneider. PG, 117 min. (JR)… Read more »

Faux-naif documentarian Nick Broomfield hits pay dirtand meets his matchin this encounter with Hollywood’s favorite madam and Ivan Nagy, her lover, pimp, and alleged blackmailer, who also directs movies and markets pornographic CD-ROMs. Other participants in the hype sweepstakes, made for the BBC in 1995, include former LA top cop Daryl Gates; Victoria Sellers (daughter of Peter Sellers and Britt Ekland), Fleiss’s former best friend and employee; and a good many other double-talkers. You may end up scratching your head about who’s telling the truth about whom (and why) or you may not care; either way this is an enjoyable slice of yellow journalism. (JR)… Read more »

Loosely derived from the book of the same title by the late Vito Russo, Rob Epstein and Jeffrey Friedman’s entertaining and instructive 1995 documentary about filmic representations of gays and lesbians goes beyond its source in equating the movies with mainstream Hollywood. But the clips and the intelligence of the commentariesfrom two dozen interview subjects, including actors Harvey Fierstein, Farley Granger, Shirley MacLaine, Tom Hanks, and Susan Sarandon, and writers Richard Dyer, Susie Bright, Arthur Laurents, Gore Vidal, and Paul Rudnickkeep this lively and absorbing. Lily Tomlin delivers the narration, which was written by Armistead Maupin. (JR)… Read more »

How can I do justice to this grungy seven-hour black comedy (1994), in many ways my favorite film of the 90s? Adapted by Hungarian filmmaker Bela Tarr and Laszlo Krasznahorkai from the latter’s 1985 novel, this is a diabolical piece of sarcasm about the dreams, machinations, and betrayals of a failed farm collective, set during a few rainy fall days (two of them rendered more than once from the perspectives of different characters). The form of the novel was inspired by the steps of the tangosix forward, six backwardan idea reflected by the film’s overlapping time structure, 12 sections, and remarkable choreographed long takes and camera movements. The subject of this brilliantly constructed narrative is nothing less than the world today, and its 431-minute running time is necessary not because Tarr has so much to say, but because he wants to say it right. In Hungarian with subtitles. (JR)… Read more »

The French title of Jacques Becker’s 1953 gangster thriller translates as Hands Off the Loot, but a much better English title used for this film is Honor Among Thieves. Jean Gabin wasn’t yet 50 when he starred as a big-time, high-style gangster hoping to retire, but he still looks pretty wasted, and this pungent tale about aging and friendship, adapted from a best-selling noir thriller by Albert Simonin, would be hard to imagine without his puffy features. Jeanne Moreau, in one of her first parts, plays a showgirl who two-times Gabin’s similarly aging partner (Rene Dary), and future star Lino Ventura also puts in an appearance. But it’s Gabin’s show all the way, anticipating the melancholy, atmospheric gangster pictures of Jean-Pierre Melville that started to appear a couple years later. In French with subtitles. 94 min. (JR)… Read more »

A schoolboy living in the suburbs of London in the 1960s experiments with murder and is packed off to a hospital for the criminally insane for eight years in this black comedy by first-timer Benjamin Ross, who collaborated with Jeff Rawle on the screenplay. I’ve tried twice to get to the end of this glib, formulaic exercise and failed both times. With Hugh O’Conor, Antony Sher, Ruth Sheen, Roger Lloyd Pack, and Charlotte Coleman. (JR)… Read more »