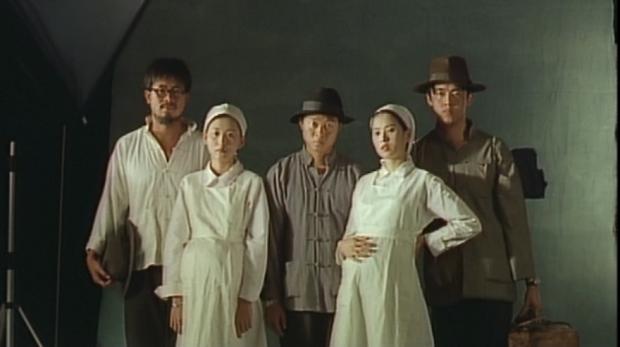 Like its predecessors, the concluding and entirely self-sufficient feature in Hou Hsiao-hsien’s epic trilogy about the history of Taiwan in the 20th century — a landmark in Taiwanese cinema along with Edward Yang’s A Brighter Summer Day — focuses on a specific period and a specific art form. City of Sadness (1989) covers the end of World War II through the retreat of the Kuomintang to Taiwan in 1949 and concentrates on still photography; The Puppet Master (1993) covers the first 36 years (1909-1945) in the life of puppet master Li Tien-lu and showcases his art. This film, whose art form is cinema itself, intercuts material from 1949 to the present. In the present a young film actress preparing to play Chiang Bi-yu — an anti-Japanese guerrilla in 40s China who, along with her husband, was arrested when she returned to Taiwan during the anticommunist “White Terror” of the 50s — is harassed by an anonymous caller who’s stolen her diary and is faxing her pages from it. Images evoked by her diary from her past as a drug-addicted barmaid involved with a gangster alternate with her imaginative projections of the film she’s about to shoot, seen in black and white.… Read more »