Sentimental Journey [on LARGER THAN LIFE] 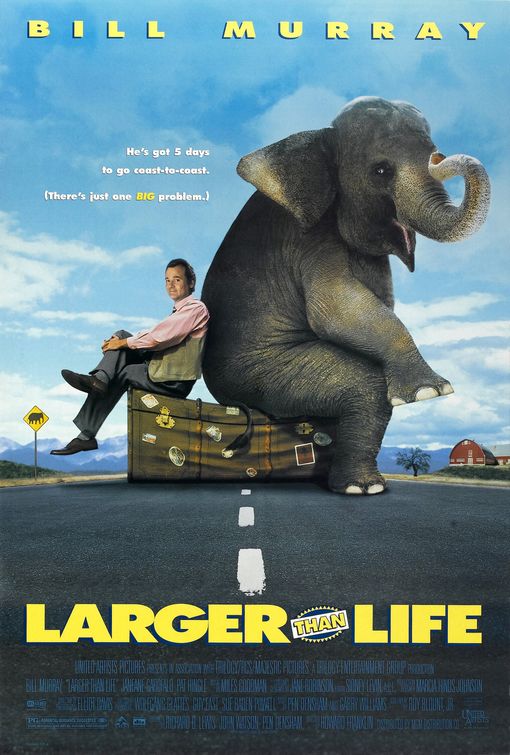 Farmer has bought an elephant at an auction. Gives him to Tom, Huck and Jim and they go about the country on him making no end of trouble. – from Mark Twain’s working notes for The Adventures of Huckleberry Finn 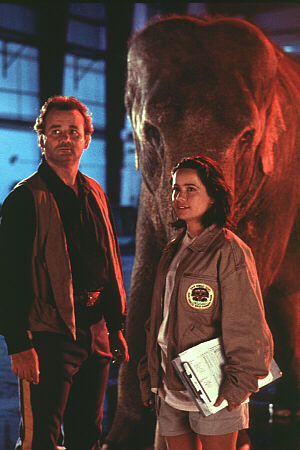 Are you still suffering from postelection malaise? I’ve just gotten back from a couple of weeks in Australia, where voting is compulsory, and for all the complaints I heard about the downsizing of government services and ugly efforts to renege on aboriginal land rights and change immigration policies, the political atmosphere seemed decidedly less alienated and despairing than it does here. This may have something to do with the geographical remoteness of the country, a sense of living on the outskirts that makes Australians less likely to posit themselves as the center of the universe and therefore less likely to have overblown expectations. Indeed, the only outright despair I encountered there was in the only movie I went to see, Love Serenade, a comedy that’s a characteristic example of Australian self-hatred laced with feminist revenge fantasies that Miramax will open here eventually. By contrast, recent American comedies like The Mirror Has Two Faces and Larger Than Life tend to be indefatigably cheerful and optimistic — it’s the world outside them that looks desperate.

In fact, when I returned home the overall mood seemed so defeatist — the polling place where I voted was virtually deserted at noon — that a comic road movie with Bill Murray and an elephant seemed just what I needed. Larger Than Life is admittedly something of a mess — ragged as storytelling, not very funny, uncertain in pacing and style — but it’s far from disagreeable, because it says something about the hapless yearning I sense all around me. In this country’s movies elephants almost invariably turn out to be metaphors — something implied by this film’s title. If the circus elephant named Vera that Jack Corcoran (Bill Murray), a hollow motivational speaker on the convention circuit, inherits from his long-lost father is too literary a conceit and too uncontrollable a prop to register as a fully plausible character, she still suggests the legacies of our country and the expectations we have for it, the unreasonable size of our projected destinies.

Jack Corcoran, engaged to be married for the second time on the east coast, grew up with the story that his father died before he was born while saving a child from drowning. But at his engagement party he discovers from his domineering mother (Anita Gillette) that this was a cover she invented when she left his father, who was actually a circus clown. He’s just died, leaving his only son an 8,000-pound elephant named Vera, a trunkful of circus paraphernalia, and $35,000 in debts, along with a meager, handwritten will that suggests he look up an old circus crony, the Blockhead, if he needs help with Vera.

Hoping to sell Vera to settle the debts, Corcoran phones a San Diego zookeeper named Mo (Janeane Garofalo), who agrees to a sale if he can deliver Vera in five days, in time to ship the elephant off to Sri Lanka for breeding purposes. The picaresque adventures that follow are all the movie has to offer, and they include a train ride to Kansas City to visit the Blockhead (Pat Hingle) and his tattooed wife (Lois Smith), a counteroffer from a Hollywood animal handler named Terry (Linda Fiorentino), the purchase of a truck that goes haywire, a scam involving a paranoid truck driver named Tip Tucker (a nearly unrecognizable Matthew McConaughey), a trek through a desert rainstorm in New Mexico, Vera “miraculously” saving a Chicano church from collapsing, the crossing of Monument Valley with a fleet of grateful Chicano peasants (and Corcoran garbed as John Wayne in She Wore a Yellow Ribbon), another train ride to Los Angeles, and the theft of a truck to get Vera to San Diego on time. It’s an itinerary brimming with all-American epic possibilities and nostalgic undertones associated with crossing the vastness of the country — many of which the movie fumbles with awkward stylistic gear changes and lousy continuity. (For colorful character sketches, I much prefer Keith David’s mercenary train conductor to McConaughey’s excessively kinetic truck driver, though both are certainly lively; for lousy continuity, consider how the movie slides over the issue of how Vera gets inside the Los Angeles airport.)

Needless to say, the journey as a whole is designed to chart Corcoran’s moral growth as he moves away from the influence of his mother, fiancée, and present job toward the kinder American legacy implied by his father’s career as a circus clown; the issue of whether Vera winds up with Terry, who represents sex and capitalist greed, or Mo, who stands for homey dependability and the survival of the species, is part of the moral education he’s supposed to be getting. The script is credited to humorist Roy Blount Jr. (who appears in an early bit as a heckler), adapting an original story by Pen Densham (one of the three producers) and Garry Williams, and I suspect it’s Blount who’s largely responsible for both the welcome literary trappings and the movie’s overall failure to translate these trappings into something more fluid and cinematic.

The direction is by Howard Franklin, who directed and wrote with Murray the underrated Quick Change, another quirky comic road movie, and brought stylistic polish to The Public Eye, which he wrote as well as directed. Here his sense of style, like Murray’s, seems defeated by the sheer unruliness of the enterprise. Only Tai — the Thai elephant playing Vera, who also played the title part in Operation Dumbo Drop — gets through it all unruffled, though the persistent use of her as a prop and metaphor ultimately interferes with her coming across simply as a character. Murray fares only slightly better.

The most characteristic slogan of the recent presidential campaign — uttered at various times by Clinton, Gore, Dole, and Kemp — was “This is the greatest country in the world,” sometimes amplified into “This is the greatest country in the history of the world.” It’s a slogan that builds elephantine expectations that can only be dashed after the votes are all counted and we have another (or virtually the same) power configuration — or that split into dissociated realms, nurturing wild dreams in one corner, desperate measures in another. It reminds me of the touching, unshakable belief of many friends in my hometown when I was growing up that Florence, Alabama, was the greatest place in the world and that those unlucky enough to be living in, say, Birmingham, Selma, Dothan, Tuscaloosa, Zip City, Memphis, Nashville, Atlanta, New York, Chicago, Los Angeles, San Francisco, Paris, Rome, Moscow, or Tokyo simply hadn’t figured it out yet.

This belief, like the campaign mantra, carries an irresistible conviction predicated on the fact that it can never be researched or tested — only clung to, as if it were an elephant that tramples on whatever gets in its way. Maybe there are Australians who harbor similar beliefs about Australia, but I never met any.