A pared-down crime thriller set mainly in Reno, this first feature by writer-director Paul Thomas Anderson is impressive for its lean and unblemished storytelling, but even more so for its performances. Especially good is Philip Baker Hall, a familiar character actor best known for his impersonation of Richard Nixon in Secret Honor; he’s never had a chance to shine on-screen as he does here. In his role as a smooth professional gambler who befriends a younger man (John C. Reilly), Hall gives a solidity and moral weight to his performance that evokes Spencer Tracy, even though he plays it with enough nuance to keep the character volatile and unpredictable. Samuel L. Jackson and Gwyneth Paltrow, both of whom have meaty parts, are nearly as impressive, and when Hall and Jackson get a good long scene together the sparks really fly. Pipers Alley. — Jonathan Rosenbaum 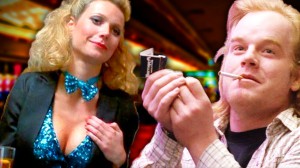