The General and Sherlock Jr. 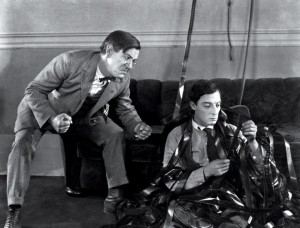 A rare chance to see Buster Keaton’s two greatest features on the same program. In Sherlock Jr. (1924) — his most imaginative and freewheeling work, as well as one of his funniest — he plays a movie projectionist who falls asleep during a detective movie and dreams that he literally walks into the screen, with surreal and bewildering consequences. In The General (1926), probably his most beautiful effort, he plays a railroad engineer during the Civil War whose train is stolen by Union soldiers, who also kidnap his girlfriend (Marian Mack); Clyde Bruckman codirected. Both are indispensable viewing.