The Way We Are [IN THE COMPANY OF MEN]

In the Company of Men

Directed and written by Neil LaBute 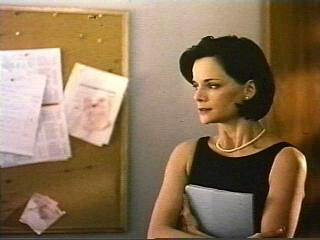 In the weeks leading up to this year’s Cannes film festival it wasn’t clear whether the Iranian government would allow Abbas Kiarostami’s The Taste of Cherry, which it had banned in Iran because of its treatment of the theme of suicide, to be shown. The issue was settled before the festival started, but that didn’t stop Gilles Jacob, the festival director, from orchestrating the film’s arrival as if it were still a cliff-hanger — so that when it wound up sharing the top prize, the award was made to seem like a triumphant statement against government censorship of the arts.

I was delighted that Kiarostami’s film won, because I liked it better than anything else I saw at the festival — and it was the only time in my eight years of attending Cannes that my favorite had been so honored. But I felt queasy about the waves of self-congratulation this provoked among some members of the press (none, I should add, encouraged in any way by Kiarostami) — especially when it became apparent that the film would probably open in Iran after all.… Read more »

Marcello Mastroianni in one of his best roles, as a late-19th-century labor leader orchestrating a strike at a Turin textile plant. Directed by Mario Monicelli (Big Deal on Madonna Street) with an exquisite handling of period, this powerful film had a sizable impact when it came out in 1963, though it’s been curiously neglected ever since. Arguably one of the great Italian films of the 60s, it cries out for rediscovery. Film Center, Art Institute, Columbus Drive at Jackson, Thursday, August 21, 6:00, 312-443-3737.

My Sex Life…or How I Got Into an Argument

My Sex Life…or How I Got Into an Argument

Three hours long, filmed in black and white, Arnaud Desplechin’s highly watchable French comedy-drama (1996) about the sex lives of 30ish Parisian intellectuals and academics has been compared to everything from Jean Eustache’s The Mother and the Whore to Reality Bites. For me, it’s a lot better than the latter and not nearly as good as the former. Desplechin undeniably catches something generational and poignant about the various relationships of a part-time philosophy teacher (Mathieu Amalric)–including one with a woman (Marianne Denicourt) who winds up getting engaged to his best friend. The influences here, by the way, are not only cinematic (the aforementioned Eustache) but also literary; novelist Philip Roth is the most overt reference point. Film Center, Art Institute, Columbus Drive at Jackson, Friday, August 15, 8:00; Saturday, August 16, 1:00, 4:15, and 7:30; Sunday, August 17, 8:15; Monday and Wednesday, August 18 and 20, 6:00; and Thursday, August 21, 8:15; 312-443-3737.