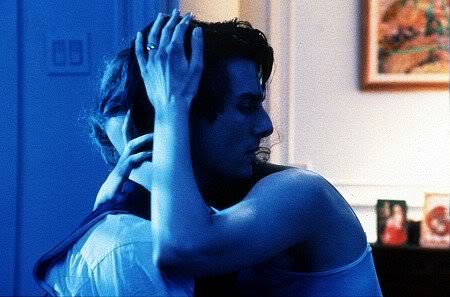 Initial viewings of Stanley Kubrick’s movies can be deceptive because his films all tend to be emotionally convoluted in some way; one has to follow them as if through a maze. A character that Kubrick might seem to treat cruelly the first time around (e.g., Elisha Cook Jr.’s fall guy in The Killing) can appear the object of tender compassion on a subsequent viewing. The director’s desire to avoid sentimentality at all costs doesn’t preclude feeling, as some critics have claimed, but it does create ambiguity and a distanced relationship to the central characters. Kubrick’s final feature very skillfully portrays the dark side of desire in a successful marriage; since the 60s he’d been thinking about filming Arthur Schnitzler’s brilliant novella “Traumnovelle,” and working with Frederic Raphael, he’s adapted it faithfully — at least if one allows for all the differences between Viennese Jews in the 20s and New York WASPs in the 90s. Schnitzler’s tale, about a young doctor contemplating various forms of adultery and debauchery after discovering that his wife has entertained comparable fantasies, has a somewhat Kafkaesque ambiguity, wavering between dream and waking fantasy (hence Kubrick’s title), and all the actors do a fine job of traversing this delicate territory.… Read more »