Apparently Woody Allen can no longer even conceive of making a movie that isn’t derived from Bergman or Fellini; this 1999 feature echoes the latter’s La strada in everything from Samantha Morton’s pantomime performance as a smiling mute to the melancholic ending. (To a smaller degree, Allen also imitates his own Zelig imitating Warren Beatty’s Reds by enlisting various jazz experts, himself included, to comment on his fictional hero.) But this absorbing picture is still about as good as Allen gets, a persuasive, nuanced, and relatively graceful portrait of an egotistical yet talented jazz guitarist of the swing era, astutely played by Sean Penn, with some pretty good solos dubbed by Howard Alden and lots of unobtrusive period flavor. The jazz milieu, combined with the fact that the Penn character is obsessed with Django Reinhardt just as Allen is with Bergman and Fellini, makes this one of his more personal projects as well. With Uma Thurman, Anthony LaPaglia, Brian Markinson, Gretchen Mol, James Urbaniak, and a bit by John Waters. PG-13, 95 min. (JR)… Read more »

This ambitious, Altman-esque tapestry by writer-director Tim Robbins re-creates various events involving art, patronage, and politics during the mid-1930s, all revolving around the Federal Theatre’s legendary New York production of Marc Blitzstein’s socialist opera The Cradle Will Rock and its suppression by the U.S. Congress. One could make countless legitimate complaints about the film’s details, ranging from its unsympathetic (and unconvincing) treatments of Blitzstein, producer John Houseman, and 22-year-old stage director Orson Welles to its crackpot theory that Nelson Rockefeller decided to foist abstract art on the American public for political reasons. But there’s something stirring and gutsy about this evocation of collective ferment, and some of Robbins’s reflections on federal arts funding (including debates at the 1936 hearings of the Dies Committee that come straight from the congressional record) are especially pungent. Linking such figures as Rockefeller, Diego Rivera, William Randolph Hearst, and Federal Theatre director Hallie Flanagan, Robbins trashes star politics in every form, denigrating artists in favor of artworks, but glories in populist expression wherever he finds it, including Blitzstein’s dated opera. The large and impressive cast includes John Cusack, Joan Cusack, Emily Watson, John Turturro, Cherry Jones, Vanessa Redgrave, Susan Sarandon, Hank Azaria, Ruben Blades, Philip Baker Hall, Bill Murray, Cary Elwes, and Angus Macfadyen.… Read more »

The Emperor And The Assassin

Historical spectaculars tend to fall into two broad categories: myths of origin (Cecil B. De Mille’s 1923 and 1956 versions of The Ten Commandments) and more ponderous inquiries into the hero’s personality (Eisenstein’s Ivan the Terrible, Lean’s Lawrence of Arabia). Chen Kaige’s massive 161-minute epic (1999) about the unification of China, accomplished by its first emperor during the third century BC, attempts an impossible synthesis of these two categories, beginning with Ying Zheng (Li Xuejian), the king of Ch’in, as a charismatic hero and ending with him as a murderous villain, the mantle of heroism having passed to his former mistress (Gong Li) and the mysterious assassin she enlists to kill him (Zhang Fengyi). Though there’s no physical resemblance, it’s impossible to follow the development of Ying Zheng without thinking of Maoin some respects the last Chinese emperorbut even without that parallel this is a powerful story and a splendid spectacle. Compared with Maggie Cheung, Gong Li is arguably more an iconic star than an actress, but on this outing she gives a pretty impressive performance. (JR)… Read more »

James Benning’s 1999 feature consists of 35 shots, each two and a half minutes long, filmed in direct sound with a stationary camera in California’s Central Valley. The final credits identify each shot according to its subject, the owner of the land, and the locationa token gesture to politicize a survey whose principal interest is formal. The overall effect is of an arrangement of attractive same-size boxes neatly stacked together but not in any particular order. Some are attractive enough and sufficiently mysterious to suggest Joseph Cornell’s surrealist boxes, and at times Benning creates some formal suspense out of the shots’ duration, but the film suffers from a certain repetitiousness, such as the recurrent use of the same horizon line. (JR)… Read more »

The title’s a good description of the great French filmmaker Alain Resnais (Night and Fog, Hiroshima, mon amour, Last Year at Marienbad, Melo). This 85-minute entry in the French TV series Filmmakers of Our Time, directed by Michel Leclerc, includes interviews with many of his screenwriters (including Alain Robbe-Grillet, Jean Cayrol, and Jorge Semprun) and actors (including Claude Rich), as well as film historian Jean Mitry. (JR)… Read more »

I haven’t seen Andre S. Labarthe’s two-part 1994 documentary about writer-director and film critic Eric Rohmer, which intersperses clips from his films with an interview conducted by his former Cahiers du Cinema colleague Jean Douchet. But it was part of the excellent, long-running French TV series Filmmakers of Our Time, so it’s bound to be good. (JR)… Read more »

God’s Got My Number

Only God sees me is a more literal translation of the first part of the French title (Dieu seul me voitVersailles chantiers) of this first feature by Bruno Poldalydes, a comedy about a hero trying to choose between three women. With Denis Poldalydes and Jeaenne Balibar (Late August, Early September). (JR)… Read more »

This has been called a delightful blend of Scorsese’s GoodFellas and Frank Capra’s It’s a Wonderful Life. For better and for worse, and delightfulness aside, this crowd pleaser is a blend of those two pictureswithout, of course, being nearly as good as either one. Whether such a crass and semiincongruous blend makes much sense is another matter. An Italian American (Anthony LaPaglia) wins the first New York lottery on Christmas Eve, 1976, and is so upset about it that he winds up getting arrested for vandalizing a nativity scene in front of a church. Most of the remainder of the movie is a sort of soft GoodFellas flashback, with Danny Aiello chewing up scenery as the hero’s father and Lainie Kazan as his mother, though it returns to 1976 for the Capracorn finale. Apparently most of the story is based on the real-life experiences of Frank Pesce, who plays his own older brother in the movie and coauthored the original story with James Franciscus. This was the directing debut of George Gallo, who scripted Wise Guys and Midnight Run, and he does a fair enough job with the material. (JR)… Read more »

Francis Coppola’s stylish and heartfelt tribute to the innovative automobile designer Preston Thomas Tucker turns out to be one of his most personal and successful movies. While the tone throughout is basically light, the overall treatmentincluding effective uses of 40s decor, big band music, charismatic performances, and zippy pacingmakes it euphoric. Coppola’s own personal investment in the story (his father invested in Tucker’s cars, and he clearly identifies with many aspects of Tucker’s idealism) gives it an undeniable lift, and Jeff Bridges (as Tucker) and Martin Landau (as his business partner) are especially good in sustaining the movie’s overall high. While the populist orientation of the movie, which relates to Tucker’s extended family as well as his ideals, isn’t delved into very deeplyand the darkness of the ethics of American big business is treated so perfunctorily that it counts for little more than comic shadingCoppola makes the most of his nostalgic Norman Rockwell depiction of benign American individualism. Scripted by Arnold Schulman and David Seidler; with Joan Allen, Frederic Forrest, Mako, and Dean Stockwell (in a fanciful cameo as Howard Hughes), and superb production design and cinematography by Dean Tavoularis and Vittorio Storaro respectively, as well as some inventive camera staging by Coppola.… Read more »

Rules Of The Road

Su Friedrich’s affecting and potent half-hour Rules of the Road recounts a former love affair in relation to an Oldsmobile station wagon in Brooklyn that she and her lover both used. While the filmmaker exposes some of her recollections and feelings offscreen, practically everything we see unfolds on streets and roads, in the city and country, where similar station wagons are glimpsed everywhere; it’s a heartbreaking demonstration of the precise ways that emotions and memories interact, obsessive and otherwise. (JR)… Read more » 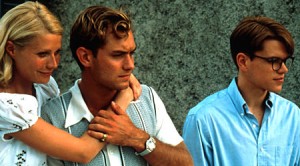 Writer-director Anthony Minghella and critic Frank Rich, both sounding like ventriloquist’s dummies for Miramax’s publicity department, touted this as an uncommercial movie that says something profound about the 90s. Yet their adaptation of Patricia Highsmith’s novel is commercial to the core. Ripley (Matt Damon), a young man on the make, is sent to Europe to retrieve a tycoon’s errant son; he winds up killing the son and assuming his identity, and Damon plays the character as a closeted homosexual and potential serial killer, which makes him about as salable as a movie hero can get these days. Rene Clement filmed Highsmith’s novel in 1960 as Purple Noon; that version was more conventional and derivative of Hitchcock, but at least it didn’t inflate the story, as Minghella does, to the proportions of Ben-Hur. As in Clement’s film, the Mediterranean settings are sumptuous, and Minghella has updated the novel’s action from the early to late 50s and made the errant son (unconvincingly played by Jude Law) a jazz musician, which allows for a pleasant if unadventurous score by Gabriel Yared and many familiar tracks. Familiarity is the watchword of this overblown opus, which neglects holes in the plot to play up its postmodern theme of identity as pastiche — a clear case of the pot calling the kettle black.… Read more »