Raul Ruiz’s adaptation of Marcel Proust’s Remembrance of Things Past can’t be regarded even remotely as an adequate substitute for the original, even though the director sensibly concentrates on the last of its seven parts. But this 1999 film is still a lot more imaginative and entertaining than one might have thought possible. Ruiz ingeniously tries to convey the transports of Proust’s labyrinthine sentences through camera movement and the displacement of characters and scenery, almost as if he were constructing a theme-park ride. The result isn’t as emotionally potent as one might have wished, but it’s never boring, and its very inadequacy and occasional obscurity are part of its charm. Ruiz and Gilles Taurand wrote the script. With Catherine Deneuve, Emmanuelle Beart, Vincent Perez, Pascal Greggory, Marie-France Pisier, Chiara Mastroianni, Marcello Mazzarella as Proust, and John Malkovich as the eccentric gay artistocrat Charlus. In French with subtitles. 165 min. (JR)… Read more »

A brisk and breezy if formulaic comedy-thriller from Japan about a shy car-rental employee (Masanobu Ando) and an equally timid nurse (Hikari Ishida) thrown together while fleeing with a lot of yen from yakuza thugs. Most of the thugs are amusingly played by the half-dozen members of a comedy troupe called Jovi Jova, and writer-director Shinobu Yaguchi seems to have as much fun standardizing their bumbling goofiness as he does standardizing the meekness of his hero and heroine. As disposable fun, this 1999 feature is every bit as enjoyable and forgettable as most Hollywood equivalents. In Japanese with subtitles. 112 min. (JR)… Read more »

For many years now, William Friedkinmacho director of The French Connection, The Exorcist, Cruising, and To Live and Die in L.A.has been languishing in relative obscurity, and this well-crafted courtroom drama with a couple of strong early action sequences may be his first good chance to reinstate himself. Retired lawyer Tommy Lee Jones defends his old pal Samuel L. Jackson, a much-decorated marine officer court-martialed for ordering his troops to fire on civilians storming the U.S. embassy in Yemen. The movie could be described as a thinking person’s version of The Ballad of Lt. Calley. It’s a highly effective piece of right-wing propaganda, though the villain isn’t a dove but a Washington bureaucrat, and Friedkin does a superb job of serving up the well-appointed script by James Webb and Stephen Gaghan. But in fact what we get is the illusion of thought, which is central to its ideological agenda. With Ben Kingsley and Anne Archer. 128 min. (JR)… Read more »

Michelangelo Antonioni’s farewell feature (1995, 115 min.), combining four sketches from his book That Bowling Alley on the Tiber, is minor only by his own standards. He made it when he was 83, after a stroke ten years earlier left him partially paralyzed and largely unable to speak; to placate the film’s insurers Wim Wenders collaborated on the script and direction, but only on the brief segments linked by a filmmaker (played by John Malkovich) who roams around looking for material. (One of these segments, featuring Jeanne Moreau and the late Marcello Mastroianni, focuses, ironically, on the theme of artistic imitation.) It’s the most directly erotic of Antonioni’s features, its stories all revolving around the possibility of sex between strangers, and Antonioni takes advantage of all the existential mysteries involved. It’s also set in different parts of Italy and France (with English, Italian, and French spoken at different junctures), and Antonioni characteristically intertwines his eroticism of the flesh with an even more precise eroticism of place. With Sophie Marceau, Irene Jacob, Vincent Perez, Peter Weller, Chiara Caselli, Fanny Ardant, Kim Rossi-Stuart, and Ines Sastre. (JR)… Read more » 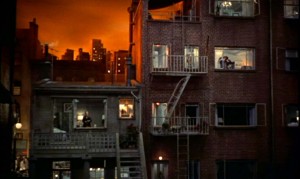 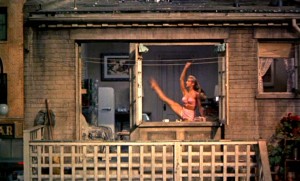 Perhaps Alfred Hitchcock’s greatest movie (1954). James Stewart plays a news photographer trapped in his Greenwich Village flat by a broken leg. Out of boredom he starts following the stories of his neighbors across the courtyard, all of which represent variations on the romantic issues of his own relationship with a former model (Grace Kelly) who’s trying to goad him into marriage. When he deduces that one of his neighbors (Raymond Burr) may have murdered his invalid wife, he moves into high gear as an amateur sleuth. Reader critic Dave Kehr called this the most densely allegorical of Alfred Hitchcock’s masterpieces, moving from psychology to morality to formal concerns and finally to the theological. It is also Hitchcock’s most innovative film in terms of narrative technique, discarding a linear story line in favor of thematically related incidents, linked only by the powerful sense of real time created by the lighting effects and the revolutionary ambient soundtrack. With Wendell Corey and Thelma Ritter at her very best. 112 min. (JR) 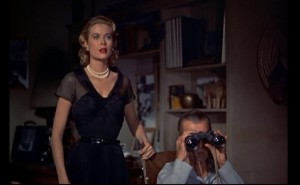 Those Who Love Me Can Take The Train

Inspired in part by the death of French filmmaker Francois Reichenbach, this 1998 feature by Patrice Chereau focuses on the funeral of a bisexual Parisian painter (Jean-Louis Trintignant) who’d asked to be buried in the city of Limoges, adding Those who love me can take the train. The train takers consist of former lovers, friends, a brother (Trintignant again), and their current mates, and emerging from the crowded comedy-drama, mainly through the funeral’s preliminaries and aftermath, is a portrait of the painter and his largely gay circle. Cinematographer Eric Gautier won a deserved Cesar (French Oscar) for his graceful handheld ‘Scope camera work, which seems both spontaneous and assured, and the directorial orchestration of the portmanteau plot by Chereau (who also won a Cesar, along with supporting actress Dominique Blanc) is also impressive. Daniele Thompson and Pierre Trividic collaborated with Chereau on the script; with Pascal Greggory, Valeria Bruni-Tedeschi, Charles Berling, Bruno Todeschini, Sylvain Jacques, and Vincent Perez. (JR)… Read more »

Not to be confused with Alan J. Pakula’s 1987 film of the Lyle Kessler play, this is the directorial debut of Peter Mullan, the striking and charismatic Joe of Ken Loach’s My Name Is Joe. Mullan also wrote the script, which seems semiautobiographical, but he doesn’t act in his movie. Four adult siblings in Glasgow (Gary Lewis, Douglas Henshall, Rosemarie Stevenson, and Stephen McCole) deal with their mother’s death, with varying degrees of inchoate rage and grief, the night before she’s buried. The view of life in general and working-class Scots life in particular is so grim that I was reminded at times of Last Exit to Brooklyn. There are comparable moments here when Mullan’s sense of the hyperbolic spills over into excess, but I was moved as well as shaken by the experience. (JR)… Read more »

A rather overextended and dull 1996 tale about a Spanish soil fumigator, his work at a vineyard, and his relationship to two women. Julio Medem directed. (JR)… Read more »

This 1934 feature is as silly and as sexy as much of Cecil B. De Mille, probably not as good as some of his other early talkies but considerably more fun than the four-hour Joseph L. Mankiewicz blockbuster of the 60s. Claudette Colbert plays that naughty lady of the Nile amid posh settings and Oscar-winning cinematography (by Victor Milner). As Dave Kehr suggested in an earlier Reader capsule, the actors, alas, are a bunch of stiffs (Warren William, Henry Wilcoxon, C. Aubrey Smith) spouting lofty sentiments in phony British accents, but you can’t have everything. 100 min. (JR)… Read more »

This feature-length 1997 video from Russian master Alexander Sokurov is basically a documentary about Umeno Mathuyoshi, an old woman who sews and embroiders kimonos in an old house in the mountains in Nara, Japan, given a narrative and semifictional framework by Sokurov’s own presence as unseen visitor. Like much of Sokurov’s work this is quite slow but has the effect of taking the viewer somewhere and inviting him or her to savor the textures. 76 min. (JR)… Read more »

The Dark At The Top Of The Stairs

William Inge’s play about an Oklahoma family in the 1920s, directed on Broadway by Elia Kazan at his near best, was quintessential Inge psychodrama. But this 1960 film was marred by censorship, and Delbert Mann’s direction is less inspired. Screenwriters Irving Ravetch and Harriet Frank Jr. carried out the required cosmetic surgery. With Robert Preston, Dorothy McGuire, Eve Arden, Angela Lansbury, and Shirley Knight. (JR)… Read more »

There’s little about this likable movie that makes me want to read the Michael Chabon novel it’s adapted from; by all indications, it belongs to the grungy-artist-as-lovable-slob genre, a la The Horse’s Mouth, even if the screenplay (by the underrated Steve Kloves) makes it seem relatively fresh. The casting of Michael Douglas against type as an over-the-hill novelist and writing professor is the sort of clever move that wins undeserved Oscars, yet the realization of at least half a dozen of the other characters is full of unexpected pleasures. This movie about writers and editors hasn’t much of a clue about the processes of either profession, or even much feeling for literary types, but the storytelling is so good-natured and assured I didn’t really care. What’s finally so agreeable about this ambling farce, set over a sordid weekend in snowy Pittsburgh, is all the things it’s uncharacteristically relaxed about, including frumpy middle-aged adultery (between Douglas and Frances McDormand), smoking pot, gay sex between an editor (Robert Downey Jr.) and a much younger writer (Tobey Maguire), an interracial couple, and the laughs that can be derived from a dead dog. Producer-director Curtis Hanson’s follow-up to L.A. Confidential has all the warmth I missed in that movie and then some.… Read more »

A genuine curiosity, this 1965 horror feature starring William Shatner, written and directed by Leslie Stevens (Private Property, Hero’s Island), and shot by the great Conrad Hall is the only film ever made in Esperanto, a language optimistically invented in the late 19th century to foster world peace. In 1968, after failing to find a distributor, producer Anthony Taylor stored the masters and what he thought were all the copies at an LA lab, which lost them. But in 1996, years after giving up on the project, he learned that the Cinematheque Francaise had a print and had been showing it since the 70s. After a year of negotiations, he obtained a copy, restored it, added English subtitles, and put it out on video, which is how it will be shown here. Not to be confused with John Hough’s 1981 horror film The Incubus. 78 min. (JR)… Read more »

Back And Forth: Films By Martin Arnold

Short works by the Austrian experimental filmmaker, known for his manipulation of images from Hollywood’s studio period. I’ve seen Piece touchee (1989), which is derived from brief snatches of The Human Jungle (1954); Passage a l’acte (1993), which makes similar use of To Kill a Mockingbird (1963); and Alone. Life Wastes Andy Hardy (1998), which does extremely creepy things with Mickey Rooney and Judy Garland. The last is the most impressive; its manipulations simultaneously dehumanize the stars and highlight the repressed subtexts of their actions and interactions. I’m not sure what kind of artistic or technical accomplishment these short works represent, but there’s no question that they’re very scary. (JR)… Read more »

This 1994 feature is much too goofy to qualify as an absolute success, but it’s so unpredictable, irreverent, and provocative that you may not care. Australian writer-director Ann Turner has a lot on her mind, and it’s unlikely you… Read more »