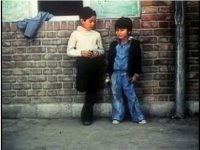 Viewers feeling flummoxed by Kiarostami’s features might have an easier time with his shorts. The most important are the nine he made between 1970 and 1982 for the film division of the Center for the Intellectual Development of Children and Young Adults, which he co-founded in 1969. Assigned to make educational films, Kiarostami scoured a ‘National Film Board of Canada catalog for ideas, regarding Norman McLaren as one of his guides. More than one of his shorts uses animation: So Can I (1975) juxtaposes the movements of cartoon animals with a live-action boy’s imitations. Kiarostami’s only previous gigs had been making commercials and credit sequences for features, and from what he told me recently, he didn’t consider himself a film artist at the time.

But he took the job seriously, and what emerged are experimental films in the best sense, without pretension, akin in form to what Brecht called “learning-plays”. I don’t mean that they offer political critiques of the state of Iran or the state of Islam, as some American commentators seem to feel all Iranian films should. They’re designed to help kids reflect on ethical, aesthetic, and practical issues ranging from the virtues of brushing one’s teeth (Toothache, 1980) to the specific properties of color and sound.… Read more »

Andrei Tarkovsky’s first major film (1966, though banned and unseen until 1971), 185 minutes long, cowritten by Andrei Konchalovsky, about a 15th-century icon painter. This medieval epic announced the birth of a major talent; it also stuns with the sort of unexpected poetic explosions we’ve come to expect from Tarkovsky: an early flying episode suggesting Gogol, a stirring climax in color. Not to be missed. Film Center, Art Institute, Columbus Drive at Jackson, Chicago, Wednesday, July 12, 7:00, 312-443-3737.