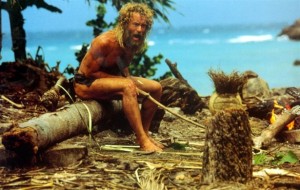 When Robert Zemeckis starts getting serious, it’s time to clear the streets. According to David Denby, Cast Away demonstrates that the director is now ready to tackle Melville, but I’m not sure he’s even ready for Defoe: this is at best an OK variation on the Robinson Crusoe saga sandwiched between sections of an unsatisfying love story. It’s several cuts down from Luis Buñuel’s 1952 Defoe adaptation and seriously hampered by the absence of any Friday (unless one counts a blood-smeared volleyball treated like a fetish and surrogate human), but it’s certainly enhanced by Tom Hanks. Less unctuous than he was as Zemeckis’s Forrest Gump, Hanks plays a FedEx employee who finds himself on a desert island with all the time in the world. The film holds one’s interest, and there’s some nice if underdeveloped ironic poetry when the hero has to depend on diverse FedEx packages to keep himself alive. But this is too full of its own heavy breathing to work as the primordial storytelling it’s aiming for — a so-so adventure story is closer to the mark. Written by William Broyles Jr.; with Helen Hunt and Nick Searcy. 142 min.