This adaptation by many hands of a 1953 Philip K. Dick story, directed by Gary Fleder, begins promisingly but deteriorates into standard-issue action, and even the shock ending isn’t as shocking as it wants to be. In the year 2079, with the earth at war with extraterrestrials for over a decade, a government scientist (Gary Sinise) is accused of being an alien robot spy programmed to explode; the hunt for him lasts most of this movie’s 95 minutes. The setting is etched in economically and effectively, but the suspense, effective at first, is stretched to the point of monotony. With Madeleine Stowe, Vincent D’Onofrio, and Tony Shalhoub. (JR)… Read more »

A diverting if forgettable romantic comedy and whimsical fantasy, about an eligible bachelor in 1867 Manhattan (Hugh Jackman) transported by a science nerd (Liev Schreiber) to the present , where he romances the scientist’s ex-girlfriend and downstairs neighbor (Meg Ryan). Not very believable, even in relation to its own premises, but if you were charmed by Somewhere in Time and/or Jack Finney’s novel Time and Again, this might charm you as well. James Mangold directed and collaborated with Steve Rogers on the script. 118 min. (JR)… Read more »

The Affair Of The Necklace

If you’re wondering why Hilary Swank chose to play a countess down on her luck in 18th-century France after Boys Don’t Cry, you probably have a lot of companyincluding, it would seem, the actress herself. Nobody seems to know quite what he or she is doing in this opulent but fairly empty period fashion show, apart from campy overactors like Christopher Walken (as charlatan-magician Count Cagliostro) and Jonathan Pryce (as a depraved cardinal), who appear eager to fill the void left by their colleagues. John Sweet wrote the script, and Charles Shyer, a specialist in fluffy, forgettable comedies (Baby Boom, Father of the Bride and its sequel), directed. With Adrien Brody, Simon Baker, and Joely Richardson. 120 min. (JR)… Read more »

Michael Mann’s 2001 epic about Muhammad Ali during a key decade (1964-’74) boasts some unusually fine performancesby Will Smith in the title role, Jon Voight as Howard Cosell, Mario Van Peebles as Malcolm X, and Giancarlo Esposito as the hero’s fatherand displays Mann’s usual talent for holding narrative interest over the stretch of a long-winded movie. Furthermore, the boxing sequences seem carried out with a kind of care and fidelity that, based on what I’ve heard from aficionados, was absent from Raging Bull. What’s lacking here is a sustained thematic focusat least five people worked on the script, including Mann, which may account for the absence of a clear through linethough the spectacle and characters keep one absorbed. 158 min. (JR)… Read more »

New Zealand director Peter Jackson (Heavenly Creatures) has joined Fran Walsh and Philippa Boyens in adapting the celebrated fantasy trilogy of J.R.R. Tolkien into three features, of which this is the first. It’s full of scenic splendors with a fine sense of scale, but its narrative thrust seems relatively pro forma, and I was bored by the battle scenes. The cast includes, among many others, Elijah Wood as Frodo, Ian McKellen as Gandalf, Viggo Mortensen as Aragorn, and Liv Tyler as Arwen. 165 min. (JR)… Read more »

A genuine rarity–a 40-minute experimental film in 35-millimeter and Dolby sound–this intriguing and arresting opus by D.B. Griffith shifts between “straight” documentary and drama as five allegorical, autodidactic outsiders (a clown, a butcher, a weeping priest, a doomsayer, and a man with a beak who speaks to birds in their own language, subtitled in English) emerge from landscapes of buildings and industrial sites in Chicago and Gary, each traveling a little further into the film’s wasted terrain. Shuttling back and forth between color and black-and-white stock, the film constitutes a kind of grim historical narrative, with an effective score by Josh Abrams that sometimes seems to emerge from sound effects. The cast includes local filmmaker Tom Palazzolo and musicians Bobby Conn and Douglas McCombs. In contrast, I couldn’t make much out of Nicholas Elliott’s 35-millimeter film Sue’s Last Ride (17 min.); shot mainly in Slovenia, it combines a desultory narrative with Super-8 footage of a performance by the Dirty Three, an Australian band. Palazzolo’s brand-new 16-millimeter film Rita on the Ropes (9 min.) was unavailable for preview. All three works are receiving their Chicago premieres, and admission is free. Cinema Borealis, 1550 N. Milwaukee, fourth floor, Friday through Sunday, December 14 through 16, 8:00, 773-278-4940.… Read more » 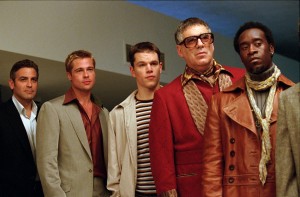 A pretty good caper comedy for 11-year-old boys — heist thriller would make it sound too ambitious — this remake of the 1960 Rat Pack movie replaces the Rat Pack with George Clooney, Brad Pitt, Matt Damon, Don Cheadle, Andy Garcia, Casey Affleck, Elliott Gould, and Carl Reiner, among others. (And since it’s about stealing $150 million from three casinos, it’s once again set in Las Vegas.) As a serviceable empty-headed entertainment, possibly even more sexist than the original (with Julia Roberts replacing Angie Dickinson as the female object — she can’t exactly be considered a character), it consolidates Steven Soderbergh’s cultivated new profile as a compliant and competent industry hack, which he’s been working overtime to flesh out in such projects as Out of Sight, Erin Brockovich, and Traffic. Ted Griffin is credited with rewriting the original multihanded script. 122 min. (JR)… Read more »

The third in a series of five yuletide slasher films, this 1989 feature was directed by Monte Hellman, one of the key American filmmakers of the 60s and 70s (The Shooting, Two-Lane Blacktop, Cockfighter), and at least one Hellman fanatic I know swears by it. With Samantha Scully and Bill Moseley. 91 min. (JR)… Read more »

A genuine raritya 40-minute experimental film in 35-millimeter and Dolby soundthis intriguing and arresting opus by D.B. Griffith shifts between straight documentary and drama as five allegorical, autodidactic outsiders (a clown, a butcher, a weeping priest, a doomsayer, and a man with a beak who speaks to birds in their own language, subtitled in English) emerge from landscapes of buildings and industrial sites in Chicago and Gary, each traveling a little further into the film’s wasted terrain. Shuttling back and forth between color and black-and-white stock, the film constitutes a kind of grim historical narrative, with an effective score by Josh Abrams that sometimes seems to emerge from sound effects. The cast includes local filmmaker Tom Palazzolo and musicians Bobby Conn and Douglas McCombs. In contrast, I couldn’t make much out of Nicholas Elliott’s 35-millimeter film Sue’s Last Ride (17 min.); shot mainly in Slovenia, it combines a desultory narrative with Super-8 footage of a performance by the Dirty Three, an Australian band. Palazzolo’s brand-new 16-millimeter film Rita on the Ropes (9 min.) was unavailable for preview. (JR)… Read more »

The initial idea is provocative: a man abandons his wife in the cafeteria of a French airport just before their scheduled flight to Buenos Aires, but instead of going home she remains in the airport as a permanent resident, working as a prostitute. Writer-director Roch Stephanik explores many of the nuances and ramifications of this fascinating concept, ably assisted by Dominique Blanc (Those Who Love Me Can Take the Train), whose performance won her a Cesar, the French equivalent of an Oscar. Yet the latter stretches of this 2000 feature are less memorable than the first part. 119 min. (JR)… Read more »

Kon Ichikawa directed this 1958 adaptation of Yukio Mishima’s The Temple of the Golden Pavilion only two years after the novel was published. A young Buddhist acolyte with a speech defect is being held by the police for setting fire to a famous temple, and a series of flashbacks explains his fixation on the temple as a symbol of the order and purity missing from his own life. Ichikawa’s use of theatrical lighting changes to mark the shifts in time is masterful, and the powerful yet delicately composed black-and-white ‘Scope cinematography by Kazuo Miyagawa (who also shot Sansho the Bailiff) is reason enough to see this film, even if you have little taste for Mishima’s special kind of craziness. Also known as Enjo; with Raizo Ichikawa, Tatsuya Nakadai, and Ganjiro Nakamura. In Japanese with subtitles. 99 min. (JR)… Read more »

Four different assertions of company ownership ran continuously over the preview tape of this $18 million blockbuster–reportedly the most expensive movie ever made in Poland–so after the first hour I kept reaching for the fast-forward button. Still, I could see that this Roman spectacular with 1,700 extras will look great on a full-size movie screen when the corporate dross isn’t blocking everything. The film premiered at the Vatican in late August for 6,000 spectators, including Pope John Paul II, even though it’s much racier and gorier than anything Cecil B. De Mille did in the 50s, with bare-breasted dancers, severed body parts when the Christians are thrown to the lions (occasioning some lively editing), and plenty more. The fifth or sixth adaptation of Nobel Prize winner Henryk Sienkiewicz’s novel–the first was in 1902–it’s not the longest, despite a running time of 170 minutes. It stacks up pretty well alongside the MGM version directed by Mervyn LeRoy in 1951, though Peter Ustinov’s Nero beats Michal Bajor’s. (Many reviewers who lamented Hollywood’s abandonment of the genre, including me, overrated Gladiator.) The director, Jerzy Kawalerowicz, is one of the most prestigious in Polish cinema, best known for such 60s features as Mother Joan of the Angels and Pharaoh.… Read more »

Predictably melancholy, this is a documentary by Scott Gill about the most famous (as well as the most ordinary looking) of all porn starssomeone I frankly hadn’t heard of before seeing this picture, though he’s appeared in more than 1,600 skin flicks. Paradoxically, it’s most interesting for how little it tells us about what Jeremy is actually like. Maybe there’s a lesson here along the lines of, when you live by the sound bite you get bitten by the sound bite: the fragmented editing and interviewing creates a kind of mosaic that says everything and nothing at more or less the same intensity for all of the film’s 79 minutes. I found it watchable and entertaining, but also opaqueand frighteningly familiar. (JR)… Read more »

Richard Linklater’s edgy, gripping 2001 feature, adapted from a Stephen Belber play, unfolds in real time in a motel room. Two supposed old friends from college (Ethan Hawke and Robert Sean Leonard) meet up ten years later, and the woman both were involved with (Uma Thurman) eventually joins them. This resembles Linklater’s animated Waking Life, made around the same time, in only a few particulars: it was shot on digital video, it’s very talky, and it indirectly expresses a certain amount of skepticism about whether objective reality exists. None of the characters emerges as very sympathetic. (Hawke plays a dope dealer, and the drama suggests on occasion a kind of slacker Strindberg.) The comparison that’s been made with Alfred Hitchcock’s Rope seems aptthough here there’s a lot of editing, in contrast to Rope’s use of lengthy takes. In both cases, a technical experiment becomes the occasion for fairly rigorous self-scrutiny. R, 84 min. (JR)… Read more »